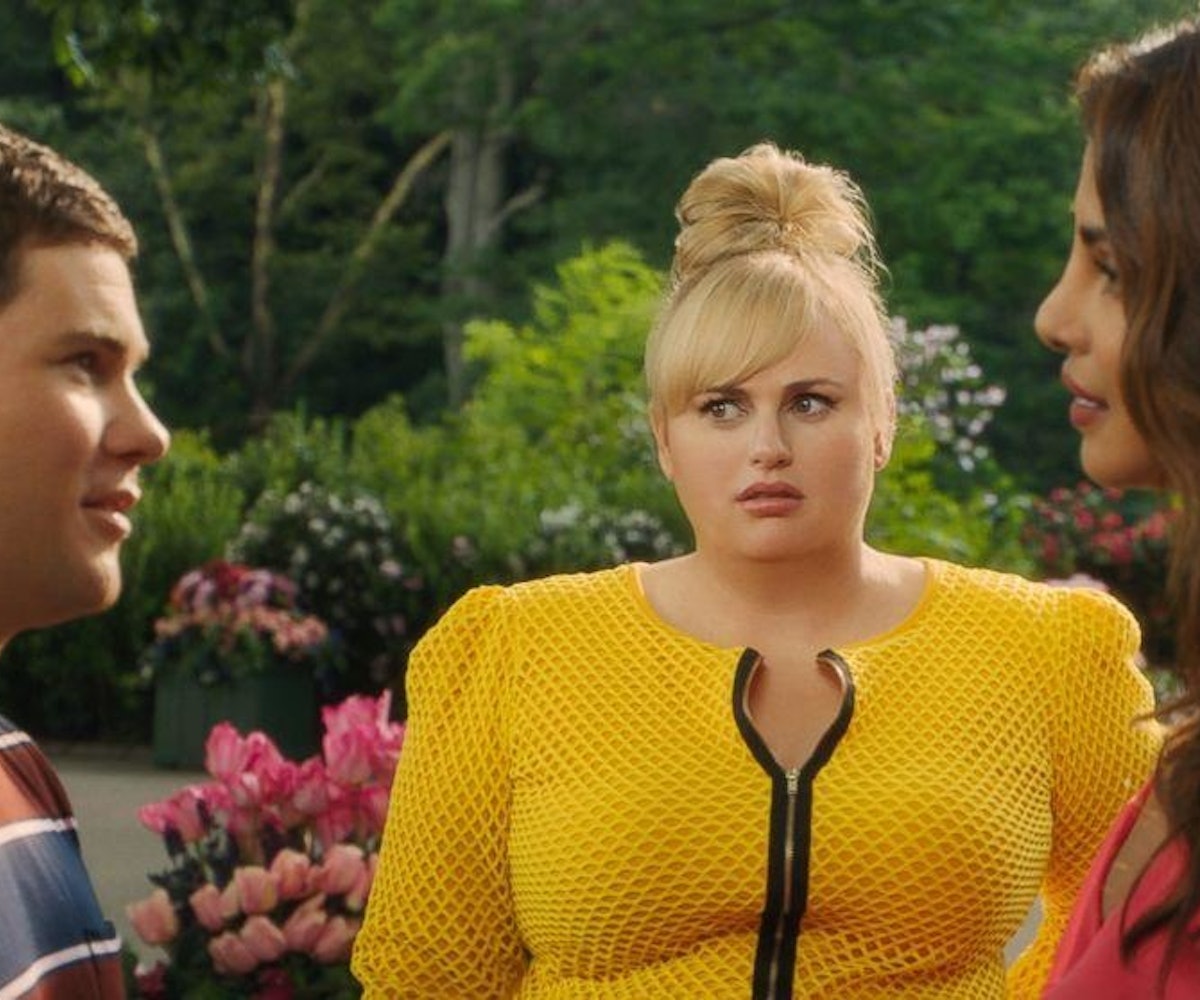 Back in November, Rebel Wilson claimed to be the first plus-sized lead in a romantic comedy when she appeared on Ellen to talk about her role in Isn't It Romantic. Wilson was not only wrong, but she was—even if inadvertently—erasing the work of Black plus-size actresses like Queen Latifah and Mo'Nique, both of whom have expansive resumes that include romantic comedies.

Wilson's comment isn't the first example of white women taking up a little too much space in the fat acceptance ethos. It's actually quite common. But there is a reason why women like Wilson—women who are blonde, pretty, successful, and white—get put front and center in calls for body positivity. In the same way that feminism—the movement from which body positivity was born—has often failed to address how gender intersects with other identities like race and class; so, too, has body positivity been championed as a cause for otherwise privileged women. And that's why it's no surprise that Isn't It Romantic, which aspires to be both a spot-on mockery of rom-coms and a celebration of body positivity, is actually a perfect example of how very white both the movie genre and the body positivity movement tend to be.

In the film, Wilson plays Natalie, an architect based in New York, who is single and plus-sized—the archetypal rom-com underdog. Very early on in the movie, she endures the double humiliation of both being hit by a runaway food cart and then accosted by its owner for not stopping it with her "cement truck"-like body. At work, Natalie is similarly disrespected: The office manager hands off troubleshooting tasks to Natalie; another colleague always tasks Natalie to throw out his trash; her assistant Whitney (Betty Gilpin) won't stop watching movies (rom-coms, naturally) while in the office; and Natalie is so afraid to present her ideas for more innovative parking garage designs that she isn't even widely known in the firm as an architect, and is treated like an intern.

But is Natalie just a doormat? Or is it that she isn't asking for what she wants? And isn't very nice about not getting it? If Natalie's life is any example, the bar on suffering is set pretty low for white women. In her personal life, Natalie lives alone with her dog, and seems to be pretty well-off, financially; her best friend is actually her slacker assistant, Whitney, and she's close with another coworker, Josh (Adam Devine), who gives Natalie constant emotional support. She's decidedly anti-romantic, having been told by her mother from a young age that there's no such thing as real-life fairy tales; she's level-headed and practical. But also, she's filled with self-loathing. This leads her to be crass, sarcastic, and disconnected from people. And it was this last part that was hard for me. As a fat Black woman who grew up broke, does not have an assistant, and would get fired if I didn't do my job well, it was hard, if not impossible, to root for her.

For Natalie, though, everything changes when she bangs her head while fighting off a mugger. Her mundane life is tinted through rosy rom-com glasses. Suddenly, all the things that sucked about her life are gone, and everything is beautiful and perfect. But was her life so bad before? It didn't really seem to be.

And yet, looking around the theater at the mostly white, female audience, I accepted that my feelings didn't seem to be shared. But that almost seems to be by design; this feels like a movie for a white, female audience. There is only one person of color in the movie who even has a name: It's Isabelle (Priyanka Chopra), who shows up about halfway through the film—after everything has been rom-com filtered—as a yoga ambassador and swimsuit model. But a name is all Isabella has. A supporting character at best, she doesn't have any connection to anyone other than her white boyfriend, and is sketchily drawn. We learn nothing of her familial or ethnic background, and, even when she is shown at her wedding, there is nobody from her family celebrating with her. This huge oversight is particularly bizarre, given that Natalie has already bemoaned the lack of diversity in romantic films.

Another huge oversight? The presence of the word "fat." I don't think I heard it used a single time. Natalie only references her weight indirectly, by commenting on the appearance of straight-sized women; when talking about her own body, the word "fat" is replaced with "girl like me." But by ignoring this aspect of herself, and refusing to address it head-on, Natalie is succumbing to the same fatphobia that shapes her world, whether she identifies it as being a problem or not.

Before her life becomes a rom-com, Natalie feels invisible at work and in the world. Some of this is certainly her fault, but fatphobia is also at play. Fatphobia chips away at the humanity of fat people from different angles. It means that Natalie gets used to being dehumanized; she doesn't expect others to have empathy for her when she's physically hurt, because they don't value her body. And it's no coincidence that Natalie's fantasy world includes a magically bigger apartment with unlimited clothing options, because discrimination against fat people isn't just a matter aesthetics and preferences—it affects everything from our ability to dress ourselves to our ability to make and save money, since there's a price to pay for being fat, even if it's just having to pay more to travel. Just as much as gender and race intersect with fat bodies, so, too, do economics and class.

I knew I could count on a plus-sized white comedian to take down a genre of films that prioritized thin women. But I ventured to see if Wilson could go further than that, and challenge what it means to be white and well-off and fat in the process; it isn't just about taking down rom-coms but about doing so in a way that isn't just a mouthpiece for white feminist values. But, in the end, that isn't what happened. Isn't It Romantic is fine, but it needed to do more than target an audience of girls who are 10 to 30 pounds overweight and still too jolted by the word "fat" to ever apply it to themselves, so they go for acceptable alternatives, like curvy, plus-sized—or thicc, if they're hip. But I'm not afraid to say I'm fat, I'm just disappointed I will be waiting even longer to see a realistic reflection of that experience onscreen.

Isn't It Romantic is in theaters now.