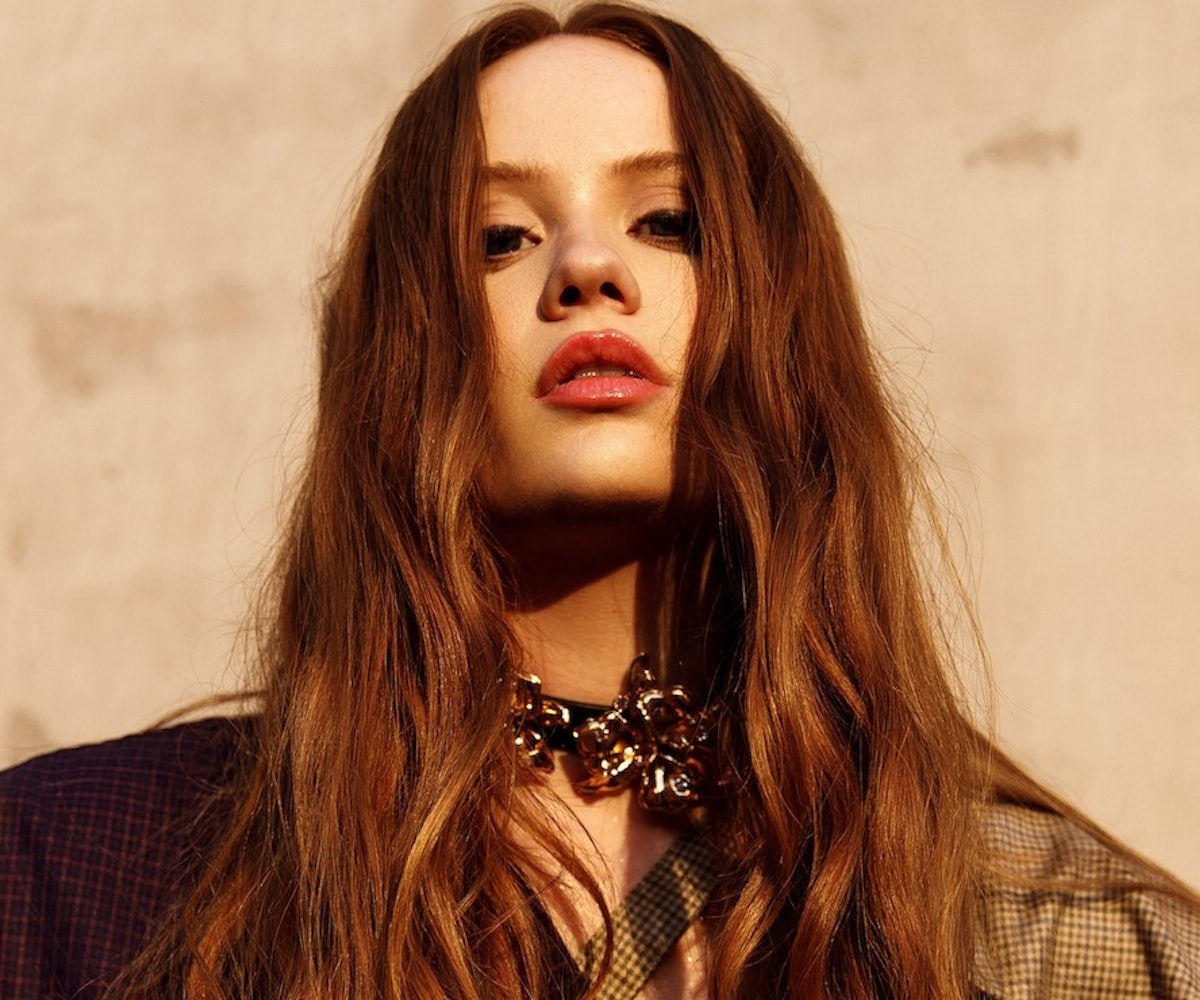 Googling Iyla's name will lead you to the stark and colorful music video for her 2018 single "Juice." Featuring her and her waterfall of red hair laying against a variety of bright backdrops as she sings over a woozy beat, the single off her first project, War + Raindrops, has amassed over 5.6 million views, all thanks to a viral Twitter moment, and the pull of her stirring voice. A year and a half later, the 26-year-old singer is sharing the follow-up, an EP titled Other Ways To Vent, which goes deeper into the identity she's begun to carve out for herself.

Growing up in a creative family in Los Angeles' San Fernando Valley, Iyla spent most of her childhood listening to Aretha Franklin, The Supremes, and other Motown artists at home. A fairly shy and reserved child, she trained as a dancer for most of her teenage years, before eventually trying her hand at singing in high school. Immediately, she knew "it's what I wanted to do." After a brief stint in a manufactured girl group, and a serendipitous collab with Snoop Dogg on a hit dance track, Iyla found her way back to R&B for her solo music. "I'm one of those people who can't be anything but myself," she explains to me one recent afternoon, tucking a long strand of hair behind her ears. "I'm just Iyla, there's no getting around it. I kind of reflect that in my music."

Her resolve to remain honest and real bleeds into the new EP, an intimate project that bops through relationship troubles and private insecurities before ending on a towering and resilient note. It marks her as a bright new talent in an otherwise crowded playing field. Below, she speaks on learning to have confidence in herself, overcoming the challenges of being a woman in the music industry, and finding acceptance within herself.

What's the earliest memory you have of singing?

When I was a kid, like four years old, pretty young, I would sing with my family. My whole family would come around, even the non-singers or non-musicians, and my uncle would be at the piano and I'd sit on top of the piano and sing. I would do the Titanic song, Celine Dion. I always loved singing. It always felt right, it always felt like my best me. I would say when I was about 10 or 11, I went to a Patti LaBelle concert and I think from that moment on I was like, That's what I want to do. I saw her on stage how she was just herself, she didn't try to be anybody else, she took her heels off in the middle of the show, and she of course killed it. She's such a powerhouse vocalist. So I was just like, That's what I want.

You went to a performing arts high school. Did you specifically study dance there?

Yeah, I went to this high school called Champs performing arts. It was a public school in LA but you auditioned in. I auditioned with dance cause I was too scared to sing, even though I was already singing. Even taking drama in high school, I was always very shy about it and embarrassed to do monologues. But it definitely gave me a different kind of confidence and helped my stage presence ultimately, because I was forced to put on a show in high school.

How did you overcome your feelings of embarrassment or stage fright?

For me, I think I'm somebody who is scared of a lot of things. I have anxiety, for sure. I definitely struggle with that every day. But I'm somebody who also loves to conquer that stuff. It gives me an indescribable feeling. In some ways that was what I was most scared of, was being vulnerable enough to get on a stage, sing for people, tell my story with lyrics and melodies. But it was also my biggest goal, so once I did it, I conquered that and from that point on I was like, Okay I did, it I can do it again. If I did it once I can do it again.

"Juice" has millions of hits on Youtube. What was it like to see so many people watching and suddenly having your audience grow by so much?

It was amazing, it's kind of everything you want, is for people to recognize the work you've put into something. "Juice" felt special from the beginning, it just had this really cool energy around it. I remember it went viral on Twitter just a couple months after it was out, and I woke up and I was talking to one of my team members and I was like "What did you guys do?" Like what happened cause I'm getting all these ... What's happening to my Twitter? And it was just basically that two people had happened to post it who didn't even have tons of followers, and it went viral and that was such a blessing. I think it also made me always want to strive for better, each video and each song.

Yeah. It was incredible to put something out, that was exactly that lane that I was aiming for. Everything we do incorporates live instruments. That was super important to us. It doesn't necessarily fit in a genre, but I think that was perfect for me, because I don't really fit in a genre. But I think the core of me will always be R&B, soul. I think that's always going to be it, and so "Juice" was definitely a validation of "Okay, people love this, I'm me, and it's accepted." That was a very cool feeling.

Did you face any challenges starting off in the industry?

I think because I'm a redhead and this Irish-Italian girl, producers would see me and treat me one type of way. And then they'd say, "Can you sing for me?" So I would sing, and they'd be like, "Oh, your voice doesn't really match how you look. So maybe you should try to do something that's more commercially appealing, like pop music or country music." I got country music more than anything. I remember this one producer, when I sang, he was like, "You're dope. You're so soulful. Your voice is beautiful, but you look like you would be in the back with chickens and a banjo." [Laughs] You know what I mean? [My current producer] Kadis, had this thing like, "Oh, you're passionate about R&B and soul and you want to incorporate all these different genres? Yeah, let's do it. Why can't you do it?" Be what you want to be and be you, don't change for anybody else.

The last song on your new project, the title track, doesn't sound like any of the other songs. Can you tell me a little bit about how that song came together?

That song, "Other Ways to Vent," it's very special to me. I wanted it to sound like, a final piece that closes out this project. When we recorded it, Kadis and I worked with this songwriter Y2, and he was like," What are you going through? Like what are you feeling right now?" And at the time, I was having a lot of anxiety about my own personal stuff, my career stuff, normal 26-year-old stuff. He had come up with the Other Ways To Vent theme. This idea that, in the end I got myself. Through all of it, the good, the bad, I got me. That's really what that song is about. It ties into every single song leading up to that song.

You have a really body positive song called "Naked Girl" on the record. Did that song stem from personal experience?

I definitely experienced in the industry people saying you should be skinnier, or the opposite like, some of the most successful women in the industry have some... pretty impressive body parts [Laughs] in a different way than my body looks. I think I definitely had my own body issues when I, like I said before, I danced my whole life, so I always felt a little bit boyish. Physically, I still am very muscular naturally and now I'm at a point where I love what makes me, me. And that doesn't mean I love it every day or every second of every day, but I feel differently now. This isn't a cis-female driven song, this is like a if you identify as being a woman, this song is for you. I think it's very empowering to put out a song like this and it's also a sexy record too which, whatever sexy is to you. Doesn't mean you have no clothes on. It doesn't have to mean you're a naked girl, but it can mean that too.

Catch Iyla on her FLOWERS tour this spring.