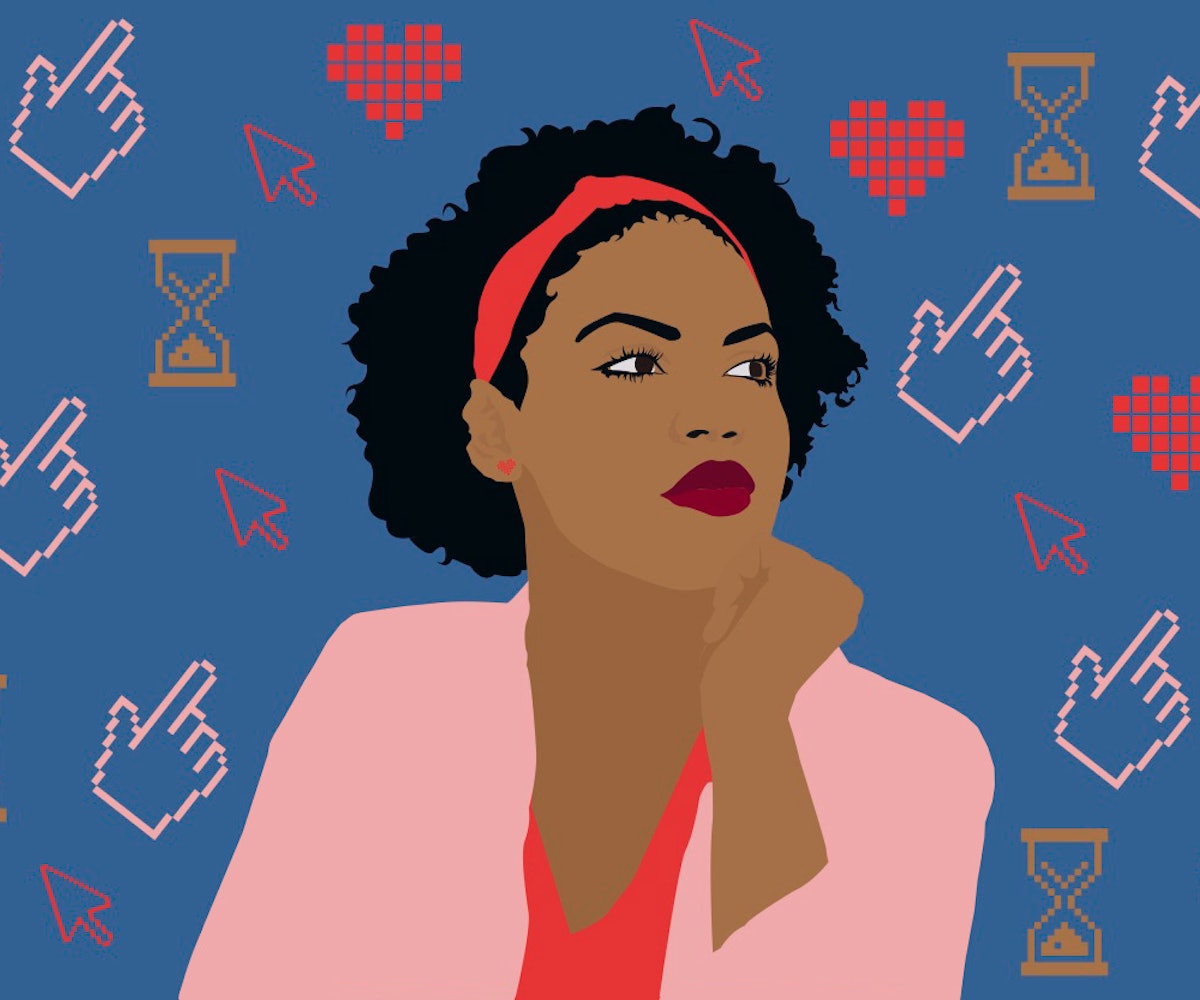 I will never understand people who invalidate the experiences of others just because they don't share that same experience. This broad sentiment can be applied to a slew of current offenders, like those numbnuts who thought they deserved to celebrate Straight Pride. But lately, I've found myself justifiably frustrated with people who don't struggle with their mental health, yet shame those who do.

You know when something relatively small and meaningless irks you, but that "something" is really just the straw that broke the camel's back? Well, January Jones really set me off recently with an Instagram comment that, for all I know, may have been sarcastic, but that had a sentiment that felt all too familiar—and troublingly so. Jones' comment was in response to a since-deleted meme on Instagram posted by the now-private account MyTherapistSays. The post shared an image featuring text that read, "Me scrolling through Instagram finding memes relating to my irrational fears and anxiety," and juxtaposed it with a Ross Geller quote: "Ah, humor based on my pain. Ah, ha, ha." Jones commented: "What is everyone nervous about? We all die. Find love or don't. Have fun or don't. Eat food and then get rid of it. It's easy."

Maybe Jones suffers from anxiety, too, and was just joking. Who knows. She never commented further. But no matter the case, the comment made me burn with fury because it brought up something for me that has always truly blown my mind: the way in which people who don't suffer from anxiety negate mental health issues. Jones may or may not have been joking, but many people think and say the same kind of thing and are totally serious.

Like, how many times have you heard someone say: "Just choose not to be anxious." Or: "You should try being more positive." They say this type of thing as if it's earth-shattering, never-before-heard life advice that will actually change the way your brain works, which couldn't be farther from the truth. They think that if I just hear someone say "don't worry, be happy" one more time, just like that... I'll be HEALED! At this point, I'm so tired of hearing unfounded, judgmental advice from people who shouldn't be giving it in the first place, that I don't care if it's done in jest—it hurts.

My whole life, I've been bogged down by unbalanced brain chemicals that whisper in my ear like Jigsaw from Saw, saying, "Spiral about the possibility of needing to pee in that meeting tomorrow morning." I'd love to know what it would be like not to have this problem. I'd love it if all I needed was a person who has the privilege to not suffer from anxiety telling me to chill the fuck out, and I'd be *eye twitching* fixed!

But, of course, that's not how it works. And it's exhausting to have to keep explaining to people that mental health issues are real. And even if these people have ignored all the irrefutable research and science behind mental illness, or the psychologists and psychiatrists whose literal professions are to work with those suffering from mental health issues, why isn't it enough for them to just hear a group of people's shared complaints and say, "I hear you, I believe you"? I don't know, but clearly, it is, because I still find myself confronting these kinds of people, the types who punch down and say, "Hey, people who aren't sliding through life as unscathed as I am, here's some advice: just don't!"

I know, I know—this is a rant about an Instagram comment that is completely inconsequential in the grand scheme of things. But lately, I feel like there's been an infuriating amount of wealthy, privileged people minimizing problems that don't affect them—and most of the time, it's so tone-deaf that it's borderline comedic (in a very dark and depressing way). In the specific case of January Jones, there's something so deeply nihilistic about "we all shit and die" that I had to laugh at—like, January, you good, bro??

Dave Holmes at Esquirehad a similar criticism of Taylor Swift's latest single, "You Need to Calm Down." Holmes wrote about how the singer-songwriter minimized the queer experience with lyrics like: "Take several seats and try to restore the peace/ Control your urges to scream about all the people you hate/ 'Cause shade never made anybody less gay."

Holmes wrote, "I am here to tell you that shade has made a lot of people a lot less gay," adding:

If "you will spend eternity in Hell for your sexual orientation," or "God hates fags," or even "don't behave that way, son, you're embarrassing me," are examples of shade, just like a well-timed zinger about a pair of pumps that doesn't match a dress, shade has actually made a lot of people a lot less alive. It deserves a more thoughtful analysis than a throwaway line in your song about people being mean to you on Twitter, five seconds before the line where you imagine me in a gown.

I like Swift's new single, but I also relate to Holmes' thoughtful and timely critique—not least because it reminded me of Jones' comments. Though Jones' words were intentionally contentious and Swift's seem to be in good faith, in a way, both sentiments steamroll over the people who are actually having those experiences. And, you know: Why are we still doing that? I have to laugh.

And I'm not the only one. Comedian and musician Elijah Daniel has a recurring joke on Twitter about ignorant, privileged people giving anxiety "tips." They kill me every time, because, as an anxious-depressive and a queer woman, I feel like I'm constantly fielding bad "advice" from people who are not only outsiders in the respective communities, but are also just totally clueless.

If you're not a part of the community that's expressing the pains of being a part of said community, you really don't need to offer them your experiences or advice, no matter how well-intentioned. There are ways to be an ally, both to those who suffer from mental health issues and the LGBTQ community, most of which involves listening, learning, and amplifying—not disputing or negating their experiences. But slamming their experiences as being "wrong" or reducing them to a cute lyric isn't meaningful discourse, and it certainly doesn't move the ball forward for this community.

Instead, let me offer some advice of my own. There should be more listening and less intrusiveness. Because, remember, like Jones told us: We are all going to die. *twitch twitch*

NEXT UP
Life
19 Self-Care Gifts For Your Friend Who Needs To Relax
Astrology
Your December 2022 Horoscope Fuels The Reboot
Ask A Witch
Ask A Witch: How To Survive The Holidays With Hoodoo Magic
Astrology
Get To Know Sagittarius, Astrology’s Wild Child