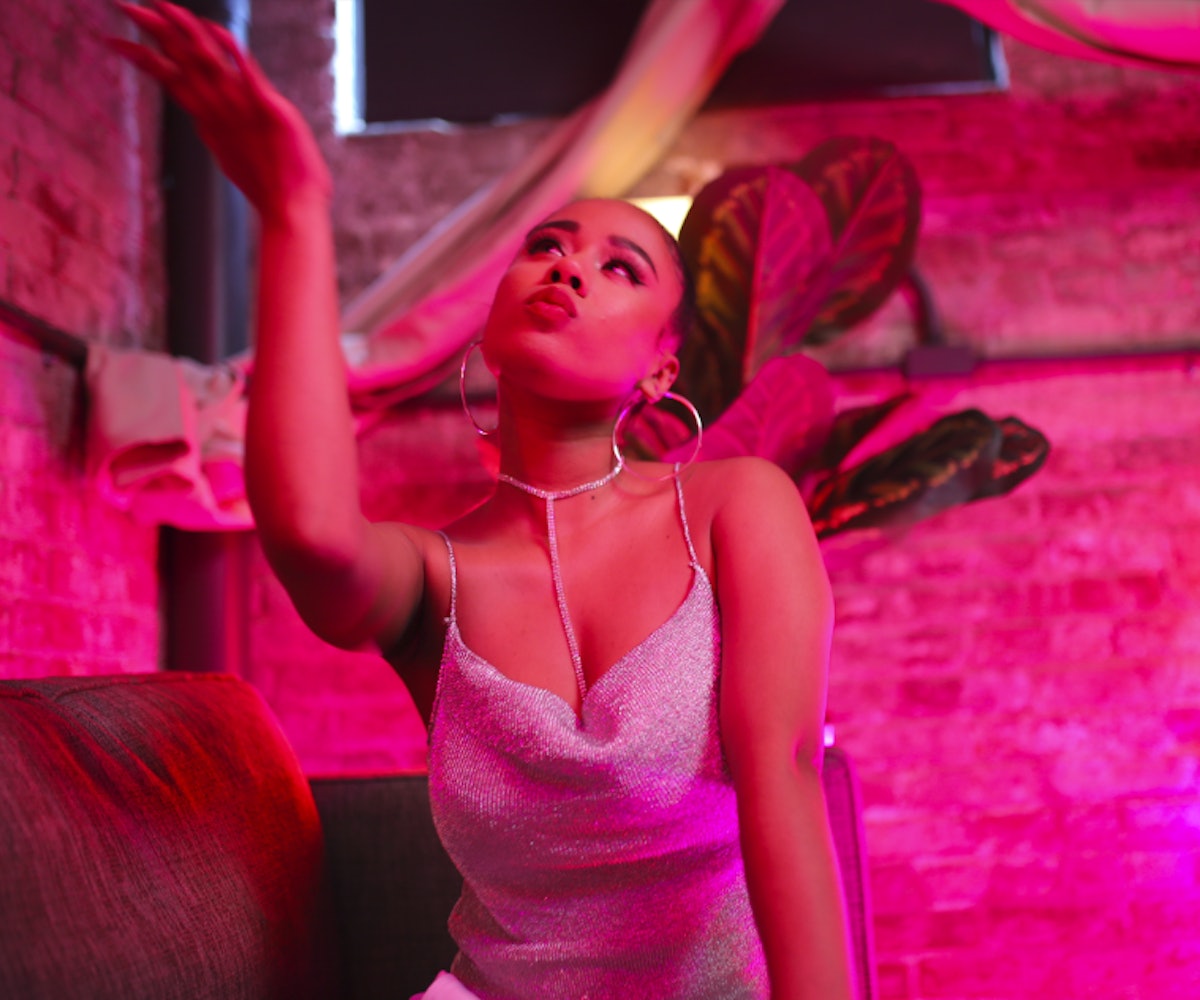 Jazzy Amra is following in the footsteps of Cardi B, J Lo, Fat Joe, and hip-hop itself. All of them had a single goal in mind: to take the sound of the Bronx and bring it to the rest of the world.

Amra's first video, "Waste of Time," pays homage to the sound and feel of the '90s, as does her debut album Amra, which dropped in February. She rides beats that remind me of 702, and she sings with the full strength of other girl groups of the era like Total. She herself notes Mary J. Blige as being one of her biggest influences, but you can tell that she is also getting a bit of a jump-start thanks to two industry veterans, Heads Music CEO Madeline Nelson and Wyclef Jean.

Check out our interview with Amra, below, and find out what it was like to meet a former Fugee, how she deals with a family that's skeptical about her music career, and what people say to her on the subway.

What was the moment where you decided that it was feasible for you to have a career in music?

It was after high school, and I was posting covers on Facebook and YouTube. A lot of people were like, "Yo, Jazzy, you should really do this.' I was like, How? I was really confused because I knew that I wanted to do it but didn't know what steps to take to get to where I really wanted to be. It unfolded beautifully, having Wyclef, being introduced to Madeline from my prior management. That was the moment where I was like, I'm going to take this super-seriously because I know that something is going to give.

Your family put pressure on you to finish school. Tell me about that.

My aunt is really old-school, and she was like, "You have to go to school because you never know if the music is going to pop off for you or not. Please go back to school, you'll be the only one who graduated." She just wants my future to be super,- super-secure, but I'm like, You're too old-school to even understand the moves that I'm making. I've gotten so far just by believing in myself and working so hard. She's not going to believe in me until she sees me move into a big house or something like that, and that's a really bad mentality to have. You really need the support of your loved ones from day one. You need them to see the vision without it really unfolding yet. That's not really the case for me yet. I told her it's a once-in-a-lifetime opportunity, that I'm working with legends; I'm traveling, I'm doing all these great things, but it's about the process and putting in the work. When you're doing something consistently, you're going to see results. I do it for me. I do it for me and my family, and I know that it's going to happen for me.

I met Wyclef through my manager, Madeline Nelson. I sang for her a week before she wanted to introduce me to him. So when I did meet him, I sang a capella and put my heart out there. I sang my heart out, he really loved it, and he believed in me. As soon as I stopped singing, he was like, "We need to work, we need to get in the studio. I see so much potential in you." After that, we've been in the studio. Working with him, it's so different to me because he understands what's in my head. The melodies... it's so hard to explain. We're writing, and I just can't get it out of my head, but he gets it out of me. It's weird to explain, but musically, he gets me. I can't say that about a lot of people, so I love, love, love working with him.

They say never meet your heroes, but what has it been like making this connection with him, after watching his career for so long?

It's great. Wyclef treats me like family. He's so humble, you forget that he's Wyclef Jean because he's so damn humble. I'm like,

I know who you are! You're too damn humble right now, bro." [laughs] He inspires me. Even growing up with my mom and listening to The Fugees, it's like I always had this perception of him and he surpassed that in real life. He's just this incredible, humble, amazing, down-to-earth person and it's deeper than the music.

What's up next for you? What are you hoping to pull off in the next year?

Definitely more visuals, a whole lot of new music. I want to be a part of different festivals, I want to get booked for a lot of shows. I'm really hoping that by next year, I'm an international artist. I'm praying on it, I'm dreaming big, I want to be international. I want people to know who I am. I'm going to keep putting out music so that people know who I am and know my music.

I know you still live in the Bronx, how is the hood responding to the music and you as you move up in your career?

A lot of people support me, and they tell me, "Yo, Jazzy, you're really from Kingsbridge Road, you're inspiring a lot of people and letting them know that they can be bigger than the hood." That's why the first song on my first album is called "Kingsbridge Road," I'm explaining where I'm from and my roots. There are so many people in my DMs, coming up to me on the train, when I'm walking home. They're like, "Yo, Jazzy, thank you for inspiring me." I feel like I haven't even done anything yet! The moves that I'm making, I already know that when I do make it big, it's going to spark a lot of ambition in people.