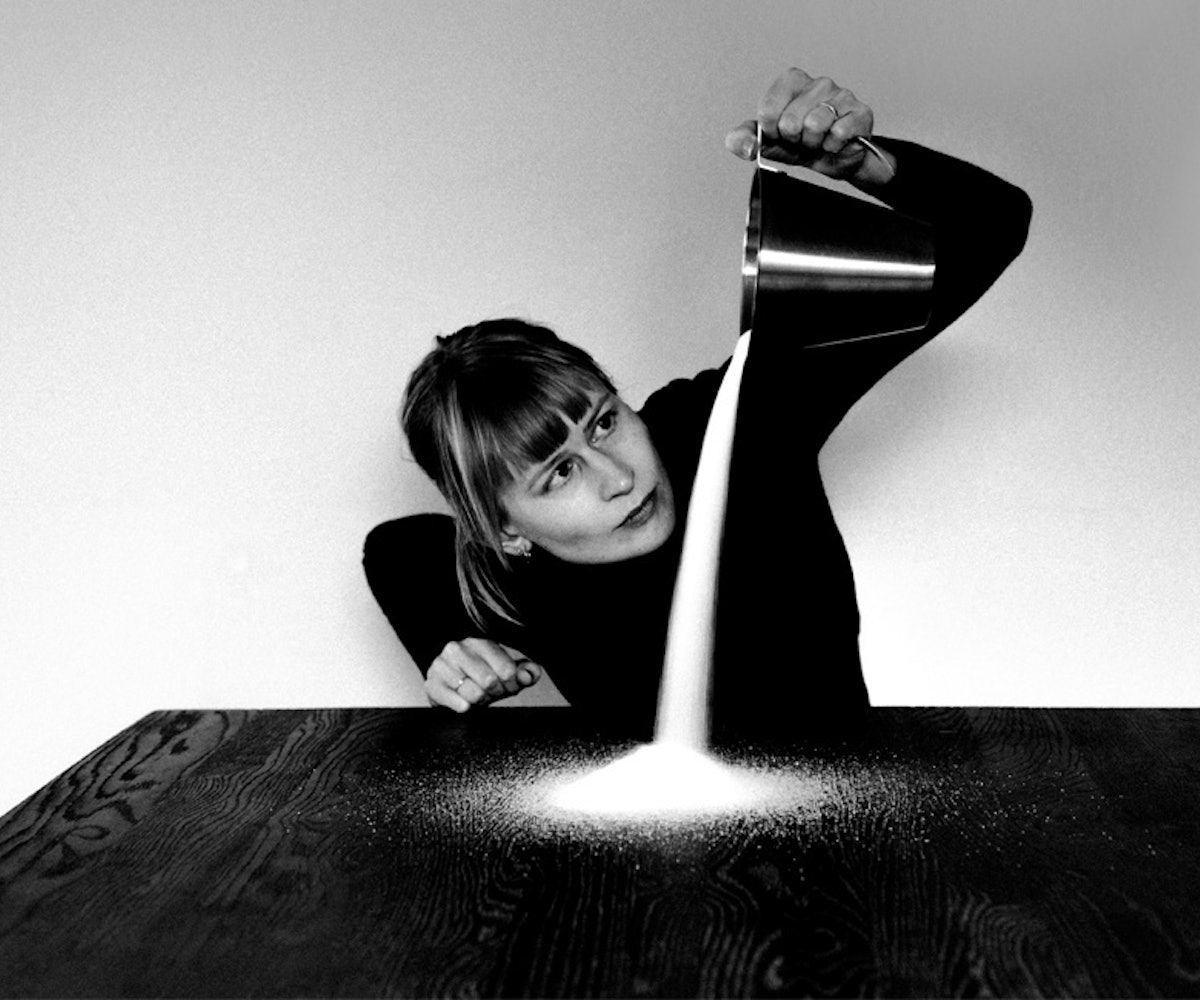 "Look at these trees/ Look at this grass/ Look at those clouds/ Look at them now…" Within moments of pressing play on The Practice of Love, the seventh album from Jenny Hval, the artist has already snapped the listener back into conscious awareness. In an age of passive listening driven by the chill, contextless churn of Spotify, Hval's latest is a refreshing reminder of music's inherent immediacy, its power to attenuate the senses into something more present, weirder—a specialty of Hval's that made her debut English novel Paradise Rot one of the year's most spine-tingling reads.

That's all before the music settles in. While "Lion" introduces the record with Hval's gentle call for awareness, echoed over a skittering beat that suggests a sense of unsettledness, it's nearly a minute in before the song's immensity finally hits: large, ever-flowing synthesizers, eventually merged with the drum track into one of Hval's most widescreen songs. It's a revelation for an artist whose music has always danced around the possibility of rhythmic release, never deployed so consistently as it is across the length of The Practice of Love.

For Hval, the record's vision sprung from several overlapping concerns. At once, the artist sought to connect with a sense of teenage angst that first sprung forth from a new book, Girls Against God, which includes, amongst other events, "A coven of witches [which] curse contemporary Oslo" and "a time-traveling Edvard Munch appears in 1990s Norway (and joins a death metal band)." (The book is set to be released in English next November.) After playing with language and a desire to rekindle the feelings of youthful dissent in the book, The Practice of Love is an attempt to channel the sonic quality of '90s dance music into new forms, sublimating old emotions into new reflections on connection.

The record was also a way for Hval to get closer to others, the power of dance music allowing Hval to fall into a form of automatic writing that was then shared with several collaborators. Across the album's eight tracks, Hval deploys the voices of Vivian Wang, Laura Jean, and Félicia Atkinson, their overlapping voices creating dialogues that only occasionally align, always at odd angles. "I find that there is something umbilical about the voice and how voices can connect," Hval says about the collaborations, all of which put into practice the distinct form of intimacy that the musician cultivates in her work. It's a joy to hear the artist so at ease in the presence of other performers, a closeness that should carry over into the interdisciplinary approach that Hval intends to take with the album's live performance.

NYLON caught up with Hval before the record's release, exploring the sonic changes on the new record, the complexity of language in shaping our understanding of the world, and the ever-present imposition of heteronormativity.

Dance music has always been nipping at the edges of your music, but never quite as thoroughly as on The Practice of Love. What compelled the change?

To me, this actually doesn't sound that different to the work I've done for my previous records. But what is different is that there hasn't really been a change from my demo set up to a production phase where you work sounds and go into creating a narrative for an entire album. I think that it's kind of the same kind of beat world in a way that I've worked with on Blood Bitch and Apocalypse, Girl, at least somewhat. But what I did find that I really liked was to move away from analog synthesizers a little bit and go into more of '90s synthesizers with a lot of arpeggiation. There's definitely more movement in these tracks, because I'm just doing more of more layers of sounds that move a lot.

I think there is not so much a revisiting of childhood for me in terms of what the record is about lyrically. But definitely on a sonic level, I think that I was remembering some music that I hadn't thought about for a long time. Things like "Confide In Me" by Kylie Minogue, which isn't trance at all, but I was thinking of a broader palette based music from various parts of the '90s. I'm not nerdy enough to go into very, very specific types of music. For me, it's more about the feeling of how things made me feel when I was listening to them. And I think there was something in these kinds of bouncy sounds that I was enjoying very much, and that really felt good to work with for automatic writing, like very flowing ways of creating words.

What was it like to return to these sounds so many years later?

I had just written a novel, which is not yet out in English, but it came out last year here in Norway. And that was also a kind of revisiting, revisiting the anger of being someone who felt very apart from mainstream discourse in Norway. It's a fictional book, but it kind of made me sort of re-experience a lot of emotions I had connected to authority, or how you connect to how you speak, how you use language. I think that I wanted to write something for this album that sort of drew from the experience of writing this '90s angry teenager voice from the book, but sort of not so much going to that teenager pain, but rather finding that voice years later, and finding some sort of clarity that it will serve, like the never-ending complexities of placing yourself in the world. And I think, with these sounds, I was sort of trying to make them contemporary or make them mean something that had a place, not just in a teenager's or '90s kind of headspace but could say something about how you connect or want to connect. And I'm not sure if I can really explain it, because great writers really could explain how a sort of airy trance sounded like, "Oh, it means the sky." I guess it's a little more complicated than that. But on some level, I do find in the '90s trance sounds that I'm attracted to sort of very clear, and very textured at the same time.

I was trying to express something also with the idea that sound can touch the listener and feel very visceral, but also maybe not visceral in the sense that it sounds like you're being loud, or like, sort of rudely intimate, but more like the wind in your face, that kind of intimacy. I do think that I needed to also find something softer, and something that would make me write something that tried to relate to other artists, other artwork, other people as well.

Love is a central theme on the record, but not in the way that many artists might deploy it. What led you to approach it as a conceptual grounding for the record?

It's striking how language has its own meaning through the words which make up another word. Honesty, it's almost like if you do interpret the word that is inside the other word, it then influences how we interpret love as a concept. Because I think that the word "love" will always influence how we interpret what that feeling means. In Norwegian, the word for "love"—kjærlighet—contains within it the word for honesty—ærlighet. I remember thinking about this one day and wondering why had I never thought of this before? And also, why have I never seen the connection between how honesty is quite a strange concept to me, in relation to love. Growing up in a country that's fairly secular, but still has a lot of definitions from Protestant Christianity, it will always have something to do with honesty, like honesty will always be connected, for me anyway, to this idea of the all-seeing eye of god, a kind of disciplinary, moral element. Be true to god, you know, that this kind of idea of undressing a human, something that to me is actually not necessarily very positive. That probably is why I have never been really, I've sort of shied away from writing that word, even in Norwegian, but it's very different. Like in French, it feels very different—amour—and then "love" in English, they're just very, very different words.

Intimacy is something essential to the human experience, but it seems like you're wrestling with a lot of questions about the ways in which dominant visions of heteronormative, parent-child intimacy shape our world. Why did these concerns arise on the record?

I think that there's always a battle and that's something that I've come to struggle with more as I get older, this idea that even if I choose how to live my life or in some in some way have made decisions that are maybe a little different from the norm with my work. My whole life has been spent, on one level, trying to find different kinships, but that doesn't mean that the pressure of heteronormativity ever really stops. It's always there, you can always sort of return to it. It's not a double existence, but I think with this record, I'm sort of saying something about how it's still there. I don't really want to feel like I'm walking around it or avoiding it. But I feel like art is a really necessary space to deal with it and give it another language, but at the same time, really try to see yourself, myself, everyone's self as potentially quite normal, common really, accepted, at the same time as refusing the ordinary or the same. It's not really saying that I'm so incredibly different, it's more that this feeling of difference will kind of keep being there, you can never escape how the world wants to see you as different.