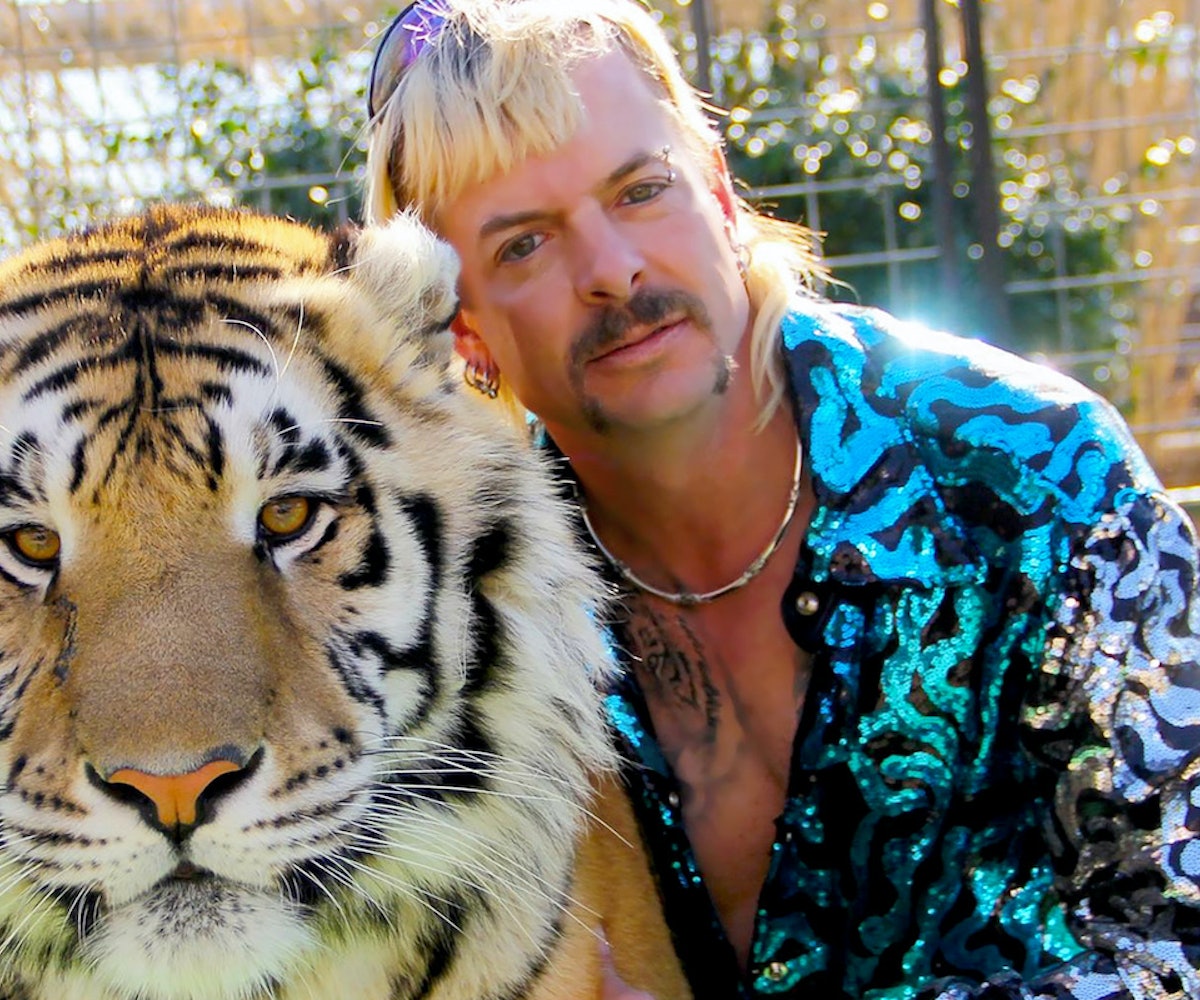 Less than ten minutes into the first episode of Netflix's wacky and wildly popular new true crime docuseries,Tiger King: Murder, Mayhem and Madness, an employee at the Greater Wynnewood Exotic Animal Park in Oklahoma says of their former boss, Joe Exotic: "Joe is an entertainer by nature. He was pretty much the star of his show." It's as true a statement as any about the series' titular character — the self-described Tiger King who, before getting sentenced to more than two decades in prison for his involvement in a foiled murder-for-hire plot, was as widely known for his claim to be the most prolific tiger breeder in the U.S. as his outlandish personality.

In addition to managing his G.W. Zoo, running for political office, and getting involved in a mind-bogglingly complicated feud with Big Cat Rescue owner and self-described animal rights activist Carole Baskin, before he got locked up, Joe "Exotic" Maldonado-Passage (née Schreibvogel) was also an artist. A country music artist, to be specific, and an enthusiastic maker of music videos. Throughout Tiger King, interviews and footage of the park are spliced with scenes from Joe's several music videos, all available to watch right now on YouTube.

Among the dozens and dozens of videos Joe has uploaded over the years — including his Joe TV show/podcast and endless scenes from life at the zoo when it was up and running — hidden musical gems await discovery. Despite their DIY-quality, the vocals of these songs are somehow... not excruciatingly terrible. According to journalist Robert Moor, who spent four years working on a podcast and magazine story about Joe and the zoo, that's because it's not actually Joe singing. "Joe did not write or sing those country songs," Moor tweeted on March 21. "It was an outfit called the Clinton Johnson Band. Joe just sang softly over the top of the vocal track." That helps explain the more boilerplate country songs Joe's put out like "My First Love" and "Because You Love Me," but still leaves a lot of information to be desired regarding the rest of his highly specific discography.

There's "Here Kitty Kitty," in which a doppelgänger for Joe's rival Carole Baskin feeds raw meat to hungry tigers. It's Joe's most popular video with nearly 300k views, and features heavily in the Netflix series. The Carole-skewering video has everything Joe's fans love: tigers, woman-hating, funky guitar riffs, and Joe dressed as a cowboy/priest.

"I Saw A Tiger," however, is perhaps the best introduction to Joe's oeuvre. It features, among other things, Joe singing and pretending to play guitar on top of an emergency vehicle, wearing handcuffs as vaguely BDSM-inspired belt buckle accessories, his exes making cameos in full camo, and tigers of all sizes and ages playing. According to the video's description, it was Joe's first music video created with the intention to "help protect and save tigers from China poaching and tiger farms." One thing is constant in the madness of Tiger King — everyone is accusing each other of animal abuse.

"Pretty Woman Lover" is a low point in the Joe Exotic music catalogue. Given that Joe is out and proudly gay, watching him feel up on scantily clad women and sing to their writhing bodies from a rooftop feels just a tad disingenuous. "I'm a pretty woman lover and an ugly woman's dream" does track with artist's history of megalomania, but the most authentic part of the video occurs when he escapes a group of women ostensibly trying to tear his clothes off to ride away in a limousine with his ex-husband, John.