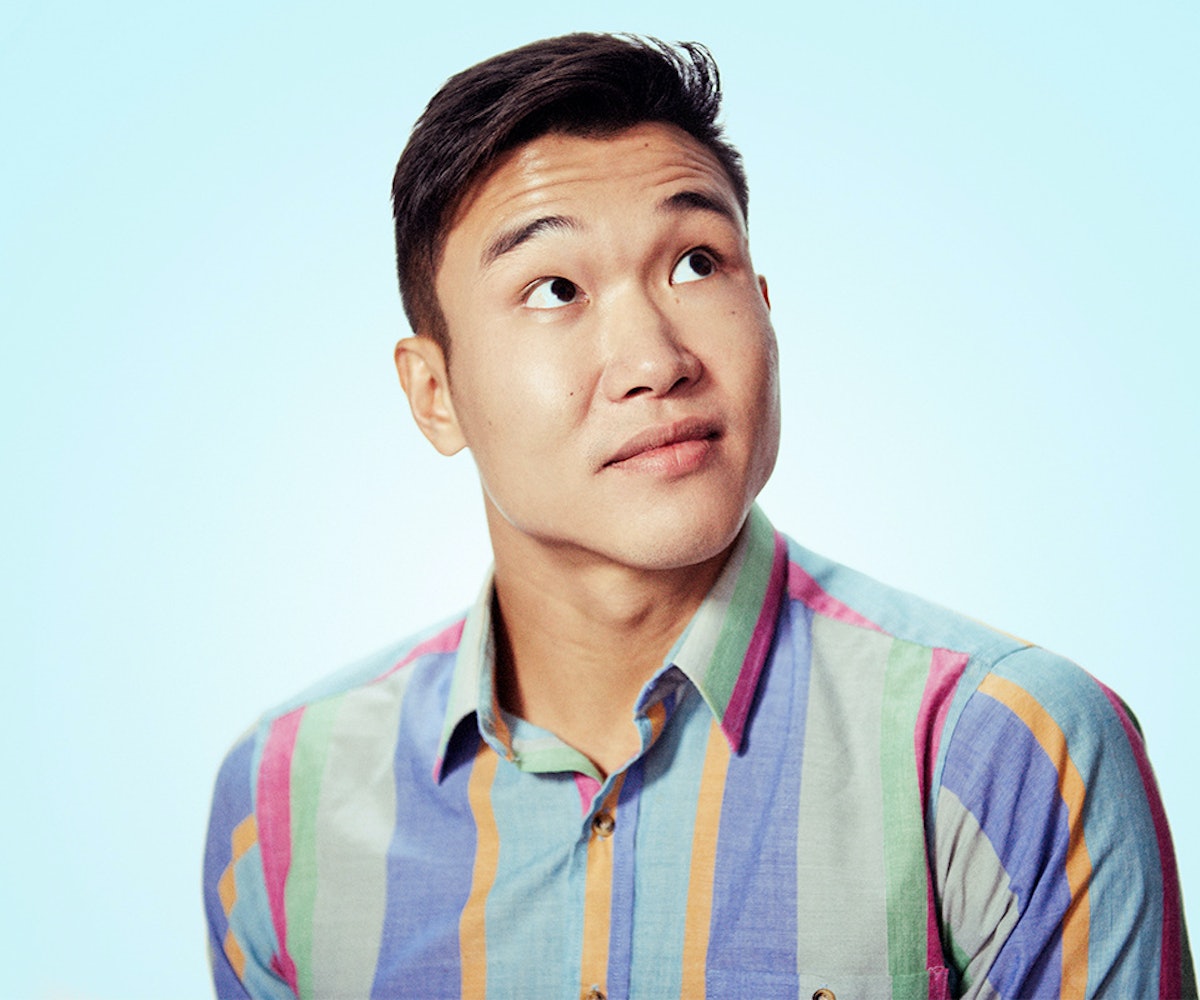 Joel Kim Booster did not initially intend on being a stand-up comedy superstar. He initially imagined himself as an actor or a writer or a playwright, on something like Six Feet Under. To put it in his words: He "glided" into stand-up. And now, with writing credits on Big Mouth and The Other Two, an appearance on Shrill, a half-hour special on Comedy Central, a web series with fellow comic genius Patti Harrison called Unsend, and a role on the recently picked-up series Sunnyside from Kal Penn and Mike Schurr, the world is his oyster.

Perhaps the best way to step into his world, though, is on his debut stand-up album, Model Minority, which shows him vacillating easily between critiquing the expectations of what a gay Asian adoptee should be to playfully delving into the absurdity of modern gay male culture. Booster's nimble and eloquent joke writing and pristine structure give his sets the propulsive attention-grabbing of a good play—which is funny, because, you know, playwriting is in his background.

Recently, I spoke with Booster over the phone about joke structure, "clapter," and what he would sing if he were at the Jimmy Awards.

A lot of your work is about expectations and the ways in which people will project ideas onto you, and your first album was called Model Minority. There's a certain political connotation with that album title. Do you think there's any expectation for you to mine from your identity and your comedy?

I definitely feel that expectation, and I don't necessarily run from it; I certainly didn't in my first album. It's something that I have moved away from a little bit more in this new one that I'm currently touring. It's a little more absurd and a little less grounded in those ideas in representation and expectation. It was definitely a place I felt comfortable in when I was in those first few years, because there weren't a ton of people who were talking about it, or talking about it on stage and making it funny. That was the challenge for me as far as how you talk about racism, and, at the end of the day, remember this isn't a TED Talk, this is a stand-up set. The goal is to make people laugh. I always want attention for the joke.

We talk about "clapter" a lot. The more conservative comedians are like, "Oh, you're just going up there and saying 'gay rights' and people clap." Or, "You're just saying 'racism is bad' or 'fuck white people' and people clap." That does exist. I will fully acknowledge that I see stand-up where I think the impulse from the audience to the left of us is more like, "Yes! We agree with you and your point!" And I never want to do that. But there's just as much of this clapter on the right as there is on the left. Like anytime you see a comedian go up there and say, "I don't get this transgender bullshit! We should just be using the bathrooms that are assigned to our genitals!" Like, that shit happens all the time too. And if they don't think that's clapter, they are fooling themselves!

You wrote a pilot that had been in development, but ended up being produced as a live read for Dead Pilots Society, called "Birthright." It's a character loosely based on yourself who goes to find their biological mother. You mention in the interview portion of the podcast that the distance between your comic sensibility had grown between when you wrote it and as it kept developing. I was wondering if you could elaborate on what you meant by that and describe how your sensibility is different now as compared to when you started writing it.

You know it was the first script that I had ever written that wasn't a play. And I wrote it as a sample to get hired on other jobs. And I think, like, I was coming at it still as a playwright. It rang very grounded. The characters speak like real people, the rhythms are the same, but I wanted it to feel grounded in the real.

For me, I still allowed myself to be a little sillier and allowed a little bit more distance in that character. In the first iteration of that script, that character was very much like me in a very grounded way. And I think I allowed myself to sorta distance myself and come out and be a heightened version of a person that I allow people to perceive me to be; not be so precious about me as a human being.

Do you have a lot of distance from your material?

One thing that I learned early on about specific storytelling is that you do need a little bit of distance from a story in order to know what the story is. Like breakups. I have a few bits about breakups. I was still, like, living through heartbreak when I was writing those jokes, and they still felt very raw. That felt interesting to me as a comedian who was writing about the pain I was feeling in that moment. But I now have a different set of jokes that are sort of about the same breakup, but years later with more distance. You know, it worked out for me in the end because I was able to have successful jokes that I can now use. I always think about that now when I am approaching something pulled from my life and thinking, Am I still in the middle of this story?

What has been one of the hardest jokes for you to crack, the way you know there's something there, but you don't know how to figure it out? And how did you figure it out?

The "Gay Dad" joke was weirdly a tough puzzle for me to solve. It was a joke that I had written right after I had dropped my album; I was in a frenzy to develop new material because I didn't want to tour with the old hour anymore. I was trying out that bit a bunch, and I got so frustrated because I couldn't figure out why it wasn't working. And I added the one line, "I don't think gay men should have children because we were put here as population control," et cetera, et cetera. And then I would move into the wolf in the national park analogy. People were would be so tight and so unwilling to laugh at that. So I added one little throwaway line, "It must be so frustrating for God because we are so much better at it!" It was a little bit of a signal to the audience that I don't really believe this, it's okay.

Keegan Michael Key and Jordan Peele said, when Zadie Smith profiled them, the thing that's funny for them is, "What's the mythology that is funny, just because people know it's not true?" I thought, Oh my god. That's what I'm trying to do! To construct these ideas. It's the main thing when I'm talking about hyperbole in comedy. It is so much more fun for me to go to the most hyperbolic place in terms of my stance and these opinions. It's funnier when you go to the extreme that way. As long as people can recognize the thing that you're building, that the mythology you're building is a false one, they will be able to laugh at it.

Tell me about your fascination with the Jimmy Awards [the National High School Musical Theatre Awards].

[Laughs] So there's really something "campy" about them… I know that word has been thrown around a lot recently with the Met Gala. But for me, first of all, it comes from a very earnest place because I was a musical theater kid too in high school. I would've taken a human life to go to the Jimmy Awards when I was in high school! Seeing kids live out my high school fantasy is very rewarding. There's also something deeply funny about talking high school theater so seriously because there's not even one minute of irony in people.

Then there's this other layer that is so very funny to me that's hard to pinpoint, and I think this is where the camp comes in. There's something funny to me about a 16-year-old girl singing a Caroline, or Change song and being so good! Not "grading on a curve, good for a high school student." Actually playing the part of a 40-year-old Black maid. Like, my eyes and my ears are being treated to this incredible performance and yet my brain is going, This is a story that should not be told by a 16-year-old girl! And yet she is nailing it! So reconciling all of those things that are in my brain—it makes me laugh! These kids are all super-humanly talented! But they're singing about shit that most times they won't understand for another decade, and that is very funny to me.

What song would you have sung?

Oh god! My go-to in high school and in college was "Purpose" from Avenue Q. I learned pretty quickly in theater school that I was not destined for the Broadway stage as a singer!