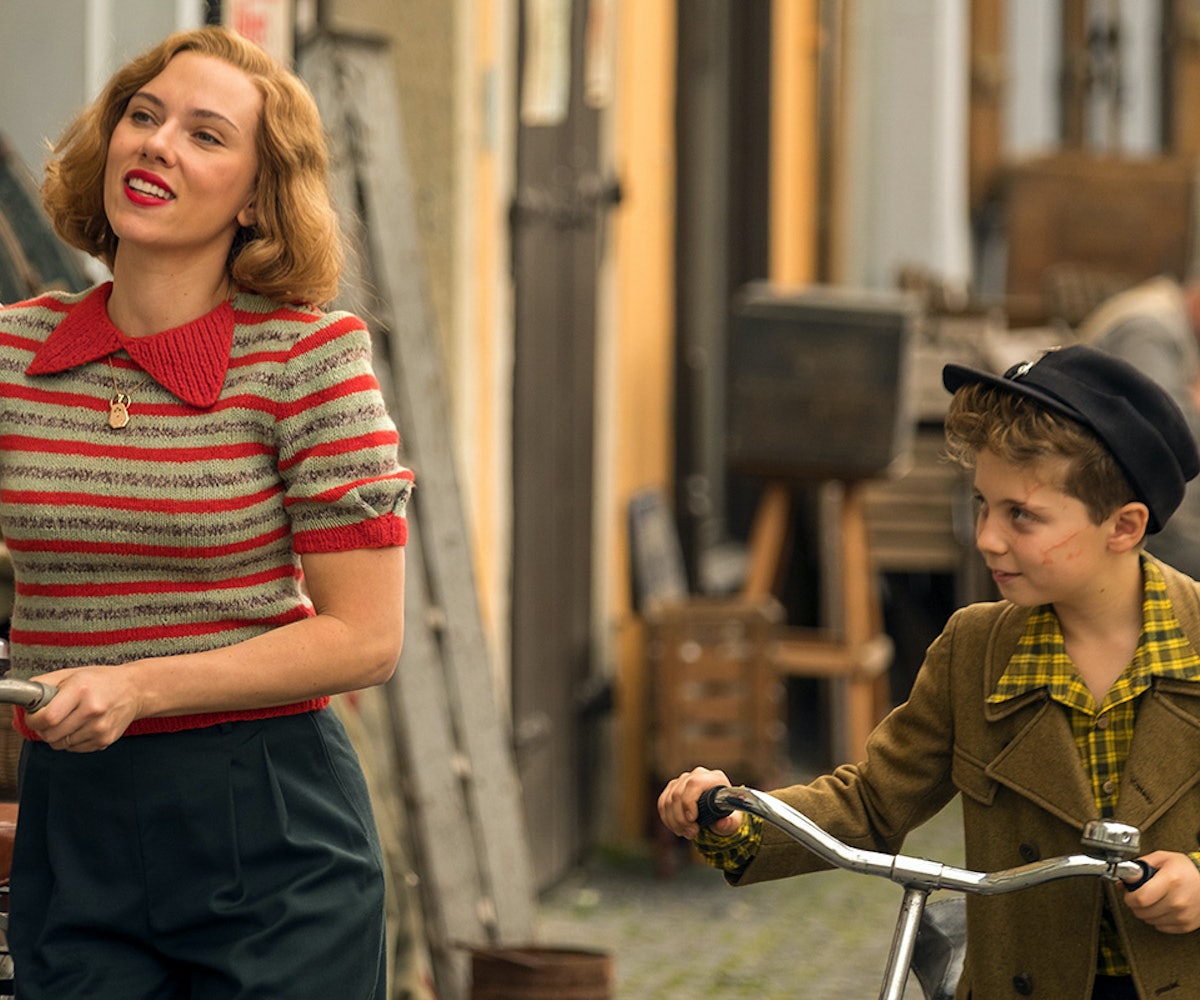 At first glance, it's hard to imagine how a film about a young boy in the Nazi Youth could be funny, enjoyable, or even welcome. At a time when actual far-right ideologies are on the rise across the globe, it's understandable that we might choose to disengage from using Nazis as a source of easy comedy. But in his new film Jojo Rabbit, writer and director Taika Waititi works overtime to find the balance between farce and contempt by pushing Nazi ideas to their most outrageous conclusion.

Jojo Rabbit follows Jojo (Roman Griffin Davis), a spunky young boy conscripted in the Nazi Youth. He greatly admires Adolf Hitler and aspires to work closely with him as he moves up the ranks of the Nazi regime. Perhaps as a result of this devotion, Hitler is also his imaginary best friend, played by Waititi himself, with all the verve and manic energy he can muster.

But in another, secret corner of their house, Jojo's mother Rosie (Scarlett Johansson) is harboring a Jewish girl Elsa (Thomasin McKenzie) and worrying that it is too late to save Jojo from the poisonous ideas that have surrounded him for his entire life. As Jojo finds Elsa and comes to understand and care for her, he gets a real-time lesson in empathy and kindness that contradicts his entire worldview.

It's an interesting experiment that belies a truth we don't often acknowledge. The Third Reich was powered by complicit adults and "Good Germans" who turned a blind eye, but it was also populated by a generation of children who never had any reason to question the virulently racist bigotry they were being fed and forced to accept. The Jewish people were "a threat to Germany" because the adults they trusted said so. German children had no other experiences to contradict the lies that became their truth. The brilliance of Jojo Rabbit is that Waititi confronts this directly by giving Jojo his own experiences with a young Jewish woman, forcing him to confront what he'd been taught while still holding him accountable for how his bigotry harmed her, and how he was participating in a system that put her life in danger.

Jojo Rabbit doesn't hit the mark on everything, and Sam Rockwell's Captain Klenzendorf is the perfect example. In easily the most enjoyable of his recent roles, Rockwell plays Klenzendorf as an absurd caricature of Nazi bureaucracy and flamboyance but remains utterly thrilling to watch. His affection for Jojo is so apparent that his sacrifice in the film's final moments feels earned and sentimental. But do we want to feel sentimental about a captain in Hitler's army? Even if he is forced to surrender in a brilliant battle costume of his own design? How much empathy should we be reserving for a man who had a direct hand in brainwashing children and teaching them that their compatriots were not even human? The easy answer is none. The truthful answer is that Rockwell manages to generate quite a bit of goodwill for his character by the time the film has ended. It's unresolved emotional conflicts like these that keep Jojo Rabbit from being truly, transcendentally excellent.

Waititi leans hard on the ridiculous and the absurd, making every Nazi adult in the film a hyperbolic cartoon, implying that these ideas only make sense to the unformed logic of a child. But for as much wit as he injects into the proceedings, Waititi cannot escape that this is still a story about a historic act of genocide, even though it's being told through the eyes of a child. Jojo's immature perspective might help clarify the stakes and simplify the morality, but they don't change the very real circumstances of the war or Jojo's proximity to it.

But the film's few flaws are buoyed tremendously by the many excellent performances throughout. Alfie Allen's Finkel is delightful and entertaining, even if he's given relatively little to do, and Rebel Wilson's Fraulein Rahm might just be the role she was born to play. Her perfectly distilled sense of timing and inherent charm make her one of the film's most reliable comic reliefs. But it's Archie Yates as Jojo's best friend Yorki who is the closest to a standout. His adorable and frank line readings rival Wilson's and his unassuming demeanor make you invested in his well-being.

Jojo Rabbit is by no means a perfect film, but those are hard to come by. Instead, Waititi as given us a story that manages to find small moments of joy amidst the insanity of human treachery, and lights a match for hope as we struggle to refrain from despair.

Jojo Rabbit is out in theatres now.