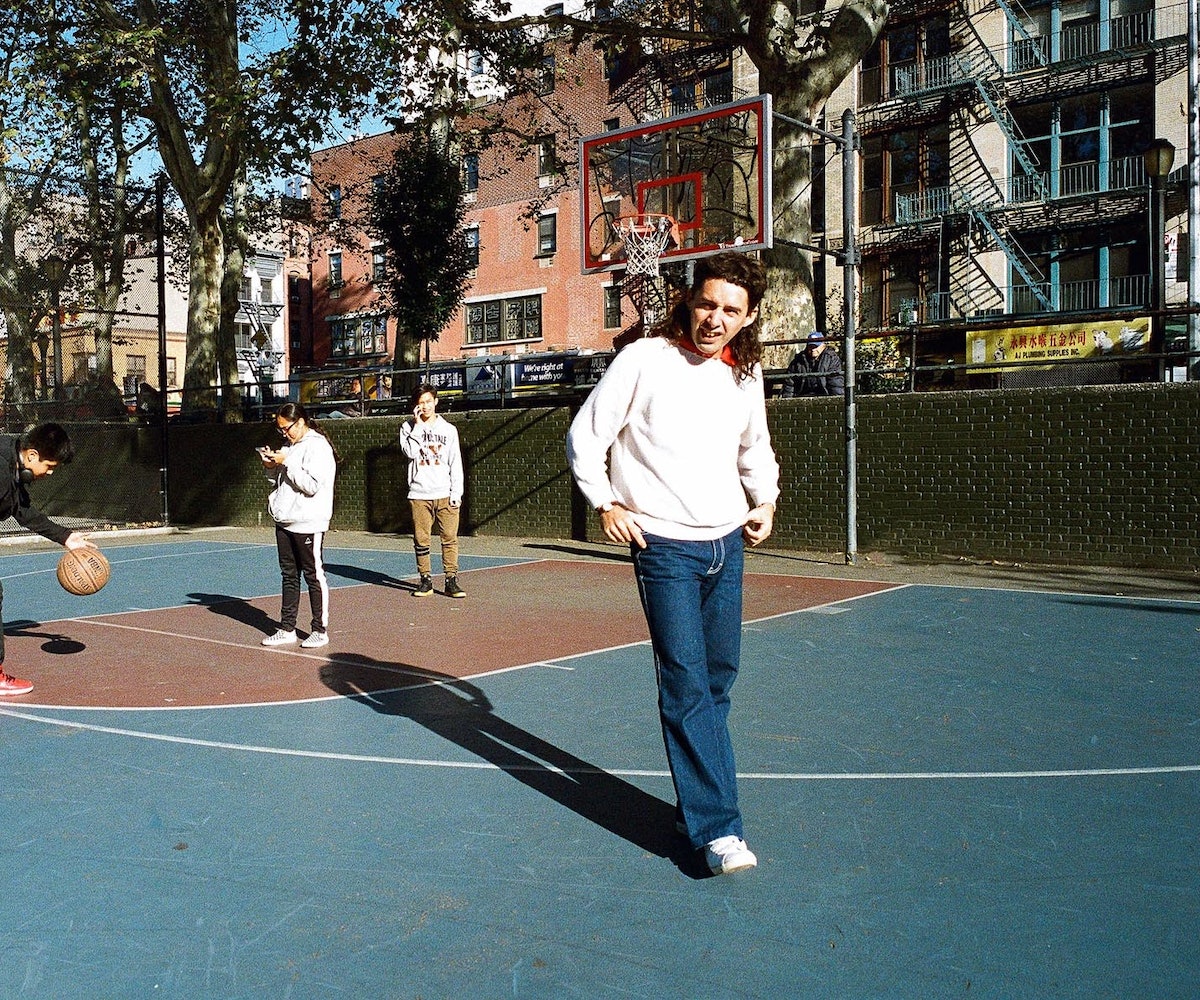 Juan Wauters' third album, La Onda de Juan Pablo, is a rich travelogue packed into 10 effervescent tracks. To record the album, the folk singer decamped from his home base in Jackson Heights, Queens, and packed a host of recording equipment into a suitcase, spending six months in Latin America in a quest to reconnect to his roots across the continent. (Wauters was born in Uruguay, but his family moved to New York when he was a teenager.) The result is a sonically rich, emotionally textured work, driven by the relationships that organically emerged as Wauters found collaborators in every new country he visited.

Although the songs are presented entirely in Spanish, the album retains an undeniable beauty to those unfamiliar with the language. Wauters builds on the Leonard Cohen-esque sound he's cultivated on previous records, in part by incorporating new and diverse instrumentation contributed by local artists in countries across South America. To accompany the album, Wauters also created a hand-drawn map of the countries he visited in the process of recording the album, giving additional context to the experiences that drove the album.

NYLON caught up with Wauters by phone to discuss how he planned out the trip, how carrying recording equipment impacted the rest of his packing, and what prompted him to take out such an ambitious project in the first place.

How did you even come up with the idea of doing a lengthy trip around Latin America to record the album?

I moved to New York as a teenager with my family. I started making music here as a hobby with my friends in Jackson Heights. The next thing you know I'm playing shows around the city, then my first show outside the city. Slowly, it started taking more of my time, and one of the things that came up was the chance to go to the place where I was born and present my music there, which to me was very meaningful. But the majority of my catalog, almost 100 percent, was in English, and when I get there, I had to face people just like me who speak the same language, but most of my songs were in English. I wanted to sing in Spanish to this Spanish-speaking audience I have developed.

So the first idea was to do an album in Spanish, and, to do that, I wanted to write it in a Spanish-speaking country. I had just played Mexico City for the first time in 2015. I really liked the city, so I decided to rent a room there and write an album. I didn't want to write in Uruguay because there would be too many distractions: people that I know, family, friends. I went to a place to be an unknown, to concentrate.

When I was in Mexico writing the songs, the opportunity came up to act in a movie in Argentina, so I was gonna record something that I had written. I had the idea: What if I go back to New York, pick up recording equipment, bring it down to Argentina, and slowly visit different countries to record with people in different places?

A lot of the musicians that I played with are traditional musicians from a specific part of the world, and they play in a specific style. I didn't want to do a style, I didn't think it was proper to do a Peruvian style because I'm not Peruvian, it wouldn't be just. So they had to come out of their style a little bit, and me too, and meet in the middle. It took a lot of work to find this middle ground with everybody.

How did you fill out the rest of your itinerary?

I spent a month in each place. So I'd get to a town, I'd say to people that I'd meet, "Hey, I'm looking for local, traditional music, will you take me to a place?" If I saw someone playing an instrument that I was curious about, I would approach them and ask if they'd be interested in participating. I was traveling alone, so I didn't have anyone rushing me, telling me what to do. Sometimes I would see someone playing on the street and talk to them. A lot of people said yes, and we ended up recording together, but a lot of people ignored me, which is okay, they don't know me, you know? But it was a search. I was not looking to play with renowned musicians. Mostly, I was looking at people and feeling their vibe.

What was it like to travel with all of your equipment, and how did you get around in Latin America?

I only went to the capital cities of each country, I didn't go into the towns. But when I got there, let's say in Lima, Peru, I rented an apartment in a neighborhood I didn't know for a month. Everything fit in two suitcases, up to the 50-pound limit, and one backpack. It was all recorded on tape, so I was carrying reels of tape, and it ended up being 80 reels. My brother came to Mexico and brought me more tapes, and when I was in Puerto Rico, the post office sent me more tapes.

It was hard every time. I would wrap it in bubble wrap, put it in suitcases. I took photos of how it fit in the suitcase so I knew it would fit again, and also separate the weight so neither would go over 50 pounds. It was a lot of rolling with the punches, but I'm the type of person, I realized, that likes adventure. My life in New York, everything gets to be really organized. I've got all my friends in the neighborhood and my parents. I've got nothing against it, but, with my music, it's always been my adventure. I don't want to compromise the type of life I live to the modern, capitalist world. I really enjoy not knowing what I'm doing. Since the beginning, I had no idea what it would be like. I met people I hadn't known before, and now we're friends for life: we've collaborated, and we're in touch. But I left without knowing anything.

Where was the album cover photo taken?

It was an intersection in Mexico City. When I started making music under my name, I put myself on the cover as the main subject, because I thought it was the way it was done. But I haven't made music since 2015, and I took time to think about how people present themselves to the world. I know that what I do, I don't do it alone. I'm someone among the world, among my group of friends, my family, my context. With this album, I wanted to show myself in context, among people, instead of saying, "Hey this is me. Look at me, look at me, look at me." More like, "I only exist because we're having this conversation, and I'm playing a show tonight because there's a group of people interested in what I do." If it wasn't for this, my music would be different. I want to incorporate the world into this project. It's not that it's just me behind my bedroom door.

Was New York in your mind while you were on this journey?

Even though I've always loved it, I came to New York with my parents. It wasn't my choice. As an adult, you know how it's very common to leave your hometown and go to another place? A lot of people in New York are not from there, but with us, I have my family there, it's my home in the world.

I left New York thinking I might want to live somewhere else. I liked everywhere, and I still like everywhere, but when I got back, I realized that I have a very special spot in my heart for New York. At the time, I was just going with it. Even though I'm 35 now, it's sort of a coming-of-age thing, you know? You know how teenagers leave their parents' home, and they try to see the world? It was kind of like that, and coming back to New York, it put me in a really good spot. But it's hard. As immigrants, we were taken away from our roots, and we already feel like we belong to the world. I belong to New York a lot, but if my parents decide to move somewhere else, I wonder what my connection would be. I have a lot of friends, but I have a lot of friends everywhere.

New York feels like it opens you up to act as you are. At least to me, I've always felt free to be myself. I've never felt judged in a negative way. Instead of saying, "Hey, you're weird," or "Hey, you're acting crazy"... nobody's ever said that to me in New York. Not just to me, but everybody. We're used to being each other, and all being different. I've traveled a lot, but I haven't come to a place that is quite like that yet. To me, as a person who likes to express himself, it's very rewarding to have been brought up in a place like that. I haven't found another place I would rather live, at least in America, and if I go elsewhere, I have to start over. Here, I know my life.