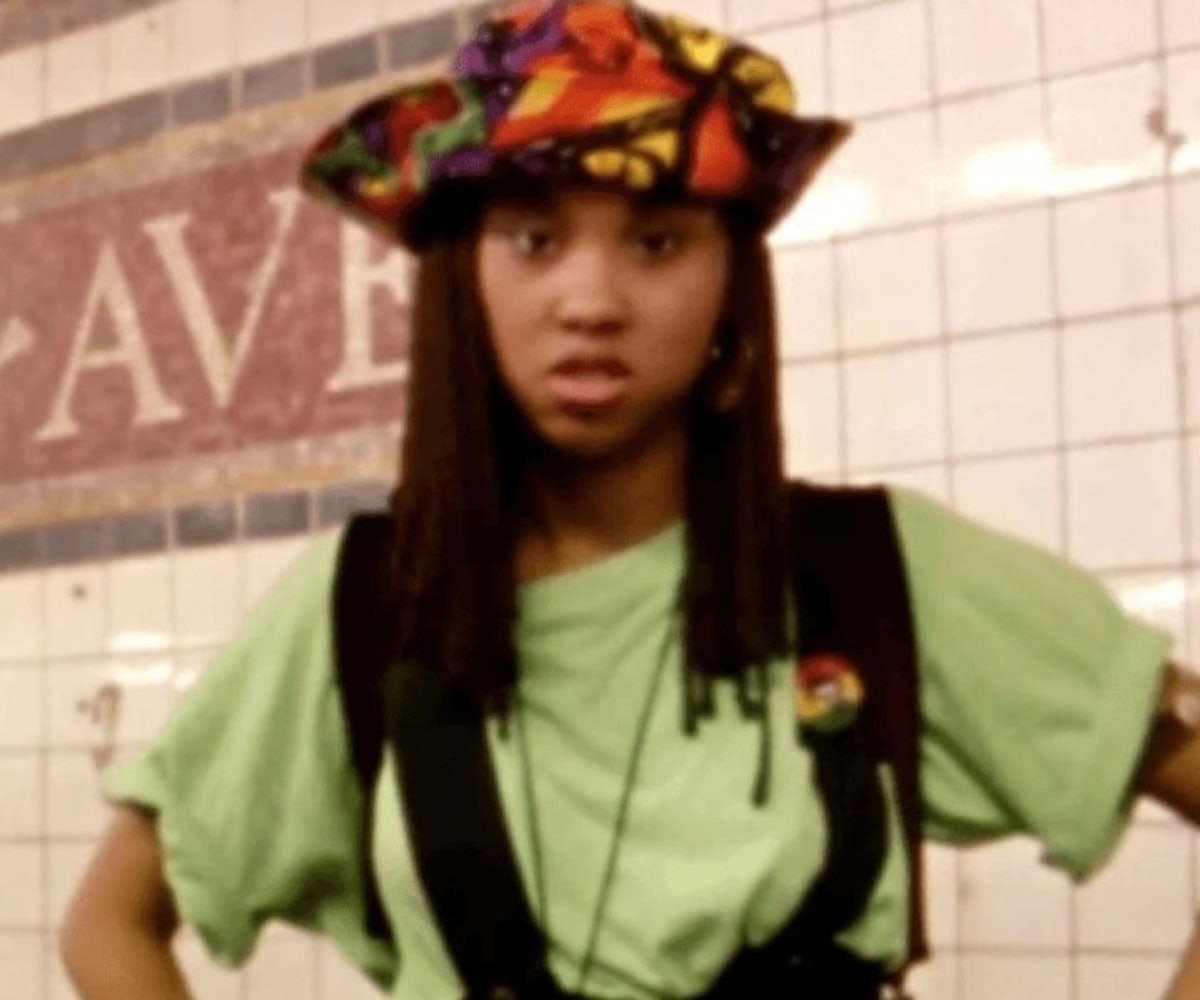 One day, during my early teen years, my best friend's friend's dad barged in on us as we hung out at her house. He held up a VHS cassette tape and began a short but impassioned rant: "Y'all need to watch this, so you'll know what happens when you go out there trying to be fast and have sex!"

We shared dismissive, knowing chuckles. I was already sexually active, and my best friend wasn't far from it. He walked out of the room triumphantly, as if he had just set us on the path of sexual purity, and minutes later my best friend and I were watching Leslie Harris' Just Another Girl On The I.R.T.

It might have been my first time watching the movie, but it definitely would not be my last—though, unfortunately for my friend's dad, neither of us internalized the main character Chantel's (Ariyan Johnson) unplanned pregnancy as a cautionary tale. Instead, Chantel was exactly the kind of Black girl we hoped to be; she was pretty and cool and smart. In this movie about an ambitious, sassy Black girl from the Brooklyn projects, dreaming of becoming a doctor, I saw myself and reveled in the idea that I too could make my own choices in life—for better and for worse.

Harris' 1993 feature film debut—which she wrote, directed, and produced—has since become a cult classic among Black women. When I saw it, the movie had already been out for nearly a decade, but it still felt like a breath of fresh air. When I spoke with Harris about the film recently, she reminded me of the onscreen landscape at the time of its release, saying, "I hadn't seen Black women authentically portrayed on the screen in a contemporary way. You have to remember this was before Moesha and a lot of these other programs came along. It was just a dearth out there. We just weren't seeing ourselves on screen."

Just Another Girl I.R.T. was released at the beginning of a wave of content about urban Black folks. On television, Martin was set in Detroit and followed the relationship, friendships, and career of radio personality Martin Payne. Living Single did the same with a quartet of Black female friends living in Brooklyn. Both series were about self-sufficient adults on their way to the Black middle and upper classes. In film, House Party and Boyz N the Hood were coming-of-age stories about Black boys. Just Another Girl was revolutionary, then, because, before it, Black girls didn't have an onscreen home, and certainly not one that kept it real like this.

"I didn't want [Chantel] to be an appendage to a guy," Harris says. "I didn't want her to be the mother, the sister, the girlfriend, the lover. I wanted her to have her own story." When she began writing Just Another Girl, Anita Hill's testimony against Clarence Thomas during his Supreme Court nomination confirmation proceedings was being televised. Harris told me she was struck by the visuals of a lone Black woman being forced to defend herself to so many white men. So when it came time to write Chantel's character, Harris tells me, "I wanted to break that fourth wall where we would see her speaking out for herself."

Chantel undoubtedly had what Black matriarchs call a smart-ass mouth. She wasn't afraid to unleash her quick wit and razor-sharp tongue on anybody. Neither her high school teacher who refused to teach accurate Black history; her principal who insisted Chantel wasn't "ladylike" enough to graduate early and go to college, despite her good grades; nor the condescending white woman in the checkout line at the grocery where Chantel worked were exempt from it. Her highly intelligent and expletive-laced tirades rained down on all of them—and the audience, as Chantel looked directly to the camera. These moments were cathartic for me as a Black girl who was conditioned not to push back on authority figures, and who got in trouble for having a smart-ass mouth way too often.

But for all the ways that Chantel was smart and fly, she was still human. For Harris, that meant she was inevitably "unpredictable, irrational, and mysterious." Chantel met Tyrone (Kevin Thigpen) at a party and was impressed by him because he drove a Jeep and was from a well-off family, unlike the guys who lived in her projects. Their relationship seemed idyllic to anyone who grew up reading urban fiction novels like Flyy Girl and Coldest Winter Ever… that is until Chantel became unexpectedly pregnant.

She met her condition with denial, going to extreme measures to hide it from her friends and her parents. She even chose to use the money Tyrone gave her for an abortion to go shopping with her homegirl instead. That Chantel, a girl with so much self-awareness about what kind of obstacles stood in the way of accomplishing her dreams, decided to forgo an accessible abortion haunted me for years. It was so out of character that I wondered if Harris opted for this outcome on moral grounds. Were there anti-abortion sentiments written into the fold of my favorite movie? Harris insists that there were not. She once supported a friend who became pregnant when they were in high school, and she merely wanted to "tell her story." Harris was enraptured by the curse of youthful naivete that makes us think we know better than everyone else. "You think you're smarter than [your parents and adults]," she says. "Then life comes, and you realize it's not as easy as you thought." Chantel's erratic behavior was a symptom of being faced with a challenge she didn't know how to handle, and that, Harris says, is a "human story."

It's really hard for filmmakers to find the resources to tell those stories, though, when the humans at their center are Black and/or female, and it's even harder for those storytellers to get the credit they deserve. Harris raised all the production money for Just Another Girl On The I.R.T. on her own. She walked away from studio funding when the executives asked her to make Tyrone a drug dealer, because it was important for her to show that class diversity exists in Black communities. Even after Miramax purchased distribution rights for the film, it was a struggle to get Chantel on the movie poster by herself, because they wanted to add a guy to the main promotional image. And, even today, Harris notices that roundups of films about pregnancy often don't include her iconic film: "They all mention Juno. They mention Knocked Up. But they won't mention a story about a Black woman."

This is undoubtedly an oversight, but in some ways I understand it. Just Another Girl On The I.R.T. is so much more than a pregnancy movie. It's one of the strongest takes on contemporary Black girlhood that exists. Thanks to this film, I did the exact opposite of what my friend's dad wanted me to do. I didn't try to avoid being like Chantel. Instead, I leaned into all the ways we were alike, navigating Black girlhood in a world that doesn't want to hear or see us. And I think I turned out alright, if I do say so myself.