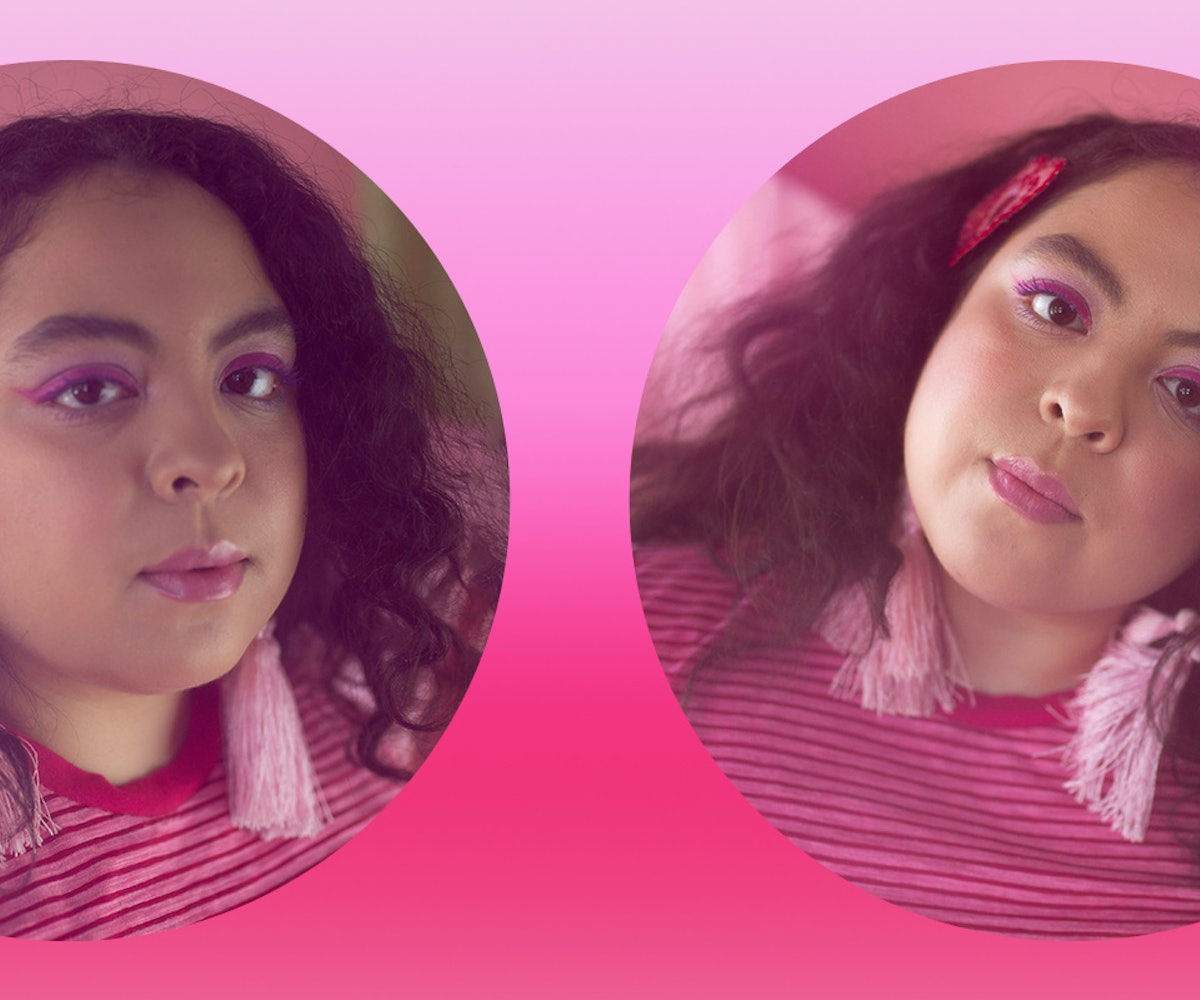 In a Chicago music scene built on camaraderie and community, there may be no stronger connective thread than Kaina Castillo. The 23-year-old singer and songwriter has immersed herself in the city's artistic culture for over a decade, integral but willfully outside of the spotlight.

"This is something I didn't realize about myself until [my team] told me, but I'm in such a centralized part of Chicago music. I don't fit in anywhere," she tells me over the phone. "I have friends who are rappers and taking over hip-hop, but I also have friends who are in the indie or alternative or DIY scenes. I get to just watch it all go down, and it's super cool."

When we speak—a little more than a week before her debut album, Next to the Sun, is released through local label Sooper Records—it feels like we're in the last days of KAINA being her hometown's best-kept secret. The record, which features songs she's written over the last six years, is a testament to the external influence of Chicago's diverse cadre of sounds, as well as her innate interiority and intellect.

She counts artists from multiple eras of Chicago music as friends and collaborators, and she says she's been learning lessons about how to navigate the industry without compromising her integrity since she was just nine years old. KAINA's peers range from Jamila Woods, who she has worked with in multiple capacities, including through the city's influential YCA writing program, to Saba, who she sang with on his standout track "FIGHTER," to ascendant talents like Burns Twins, who she collaborated with on the 2016 EP sweet asl. Even the music video for her single "Green," which KAINA describes as a "validate-your-feelings anthem," was directed by Chicago singer and rapper Jean Deaux.

"I was honored to be a part of it and have her allow me to tell her story," Deaux says. "She's an artist I'm constantly rooting for because her sound is so strong and genuine."

KAINA's closest collaborator and "best friend," producer-artist Sen Morimoto, was essential to the completion of Next to the Sun. He assists on production, guests on the standout trilingual track "Could Be a Curse," and simply understands the way that KAINA works, which involves ruminating on feelings and experiences for a long time, before finally putting them to music in a way that eschews any prescriptive process.

"I never sit down and think, Oh, this is my template or structure for the kind of music I want to make," she explains. "It's just like, 'Oh Sen, I want to make a salsa song. Can you play 500 instruments?' And then he does it."

While KAINA might not have a strict method for translating her ideas into records, she does describe how it feels to release music with consistency. After spending so much time contemplating her thoughts and feelings, there's a cathartic quality to turning them into art, and a finality to putting them out into the world knowing they no longer solely belong to her.

"Sometimes when I write songs, they're like an emotional release, and when I release them for other people to hear, then it's sort of like I'm letting go of that feeling. I'm super ready to put out this album, because there are a lot of feelings on there that I have been so analytical about and spent so long processing, and I'm over sitting with those feelings," KAINA says. "I just want them to go live their lives. They're like kids."

Next to the Sun opens with the elegiac "House," a song about the dissonant existence of many Latinx people in America. Their work is integral to keeping the country running, yet they're perpetually othered and pushed to the margins. The track's central metaphor is blunt but effective. In it, the United States is yet another home that couldn't function without the effort and care of people of color.

"Look how these brown hands cook all your meals/ But Momma says you want us all to disappear/ You like to keep this place so empty," she sings over warm, sustained chords.

KAINA, a first-generation American with Venezuelan and Guatemalan roots, says the song was inspired by her own family's struggles. For them, life without a lengthy lineage in the U.S. can feel like tenuous ground, but they still strive and show sincere, unshakeable compassion to those they encounter.

"I tried to think about if someone was racist to my mom and how absurd that would be, because my mom would still have love for them," KAINA explains. "She would still have a seat at her table and feed them."

Beyond simply supporting her daughter's career, KAINA's mother is heavily involved in the release of Next to the Sun, as she is cooking traditional Venezuelan food for a two-day pop-up restaurant that doubles as an album release celebration. As a tribute to the tribulations faced by her family and other Latinx people in America, "House" is a strong example of KAINA's writing skill, specifically her ability to paint scenes with a kind of aura reading-esque abstraction that still evokes a visceral response in the listener.

"One of the things I love about KAINA's writing is her use of economy of words, her ability to write hooks with beautiful short simple phrasing that allows them to easily get stuck in your head," says Woods.

KAINA illustrates that quality on earlier songs like "f*cked up" and album tracks like "Waiting on a Day" and "What's A Girl," the latter of which centers around an idea that informs much of both her personal life and her career as an artist just beginning to see years of hard work truly pay off.

"Sick of not having shit/ Stuck in between having everything and nothing at all," she declares, indignation building in her tone.

"What's a Girl" is one of the album's oldest cuts (along with "House"), so it's clear that the frustration which swirls on the opening lines is a feeling she knows well. Both tracks are informed by her family's experience in the U.S., as well as the contradiction of succeeding in an at-times hostile environment while still feeling like they "don't have enough to claim for our own." But KAINA approaches those topics from differing perspectives on each song, making Next to the Sun a richer project along the way.

"'House' is like my prayer for the world. It feels like a five-year-old kid who's like, 'Why is the world like this?'" she says. "Then 'What's a Girl' is kind of like the teenager who realizes that life is shitty and everyone sucks, and they're like, 'Why the fuck am I dealing with this? I'm going to wreak havoc because I can.''

Part of the magic of Next to the Sun is that the shift—from big picture, societal problems to the smaller ones that ping around our minds all day—never feels stilted or too stark, even as the record's first two tracks, "House" and "Ghost," deal with wildly different issues. That cohesion is the deliberate effort of KAINA, who stresses duality as the album's central theme and offers a truncated look at the inner workings of her mind as it navigates through troublesome waves of various sizes.

"We can talk about positionality and identity forever, but on top of that, I'm also a young woman who experiences, like, general feelings of love: Does my crush like me?" she says with a laugh. "So it's funny, because every day I wake up, and I'm like, This world fucking sucks. But at the same time, I think, Will I ever fall in love? Who knows?"

This sentiment is summed up in the title and hook of "So Small / So Vast," which KAINA describes as, "a 5am existential talk with your friend about the universe where you're like, 'Damn man, we're everything and nothing at once.'" There's dualism to the track musically as well, with her delicate vocals placed over a knotty bass line.

KAINA, who has shared stages with artists like Kali Uchis and Cuco, is touring this summer with The O'My's and Cuco in the fall. She says performing is her favorite part of being a musician and describes herself as an empath with an understanding of the give-and-take relationship between artist and audience that elevates a show to something beyond simple spectacle.

"Sometimes there are moments where a room wants to feel that emotion with you, and they want to talk to you about it and participate, and there are also moments where a room really just needs to hear those words and support from you as an artist," she explains. "I've had moments where I've had great shows by just being a voice that people like, and I've had others where I've had a great show because I was more of a performer. [It was] more like, 'Hey, we're here together. We're going to have fun. You're going to sing these lyrics with me.'"

After the world has had time to sit with Next to the Sun and explore the myriad of emotions KAINA lets loose in each track, those rooms she plays will only get bigger. But there's no question that—as an honor roll student of Chicago's music scene and a compassionate, soulful artist—she'll be prepared for the spotlight.