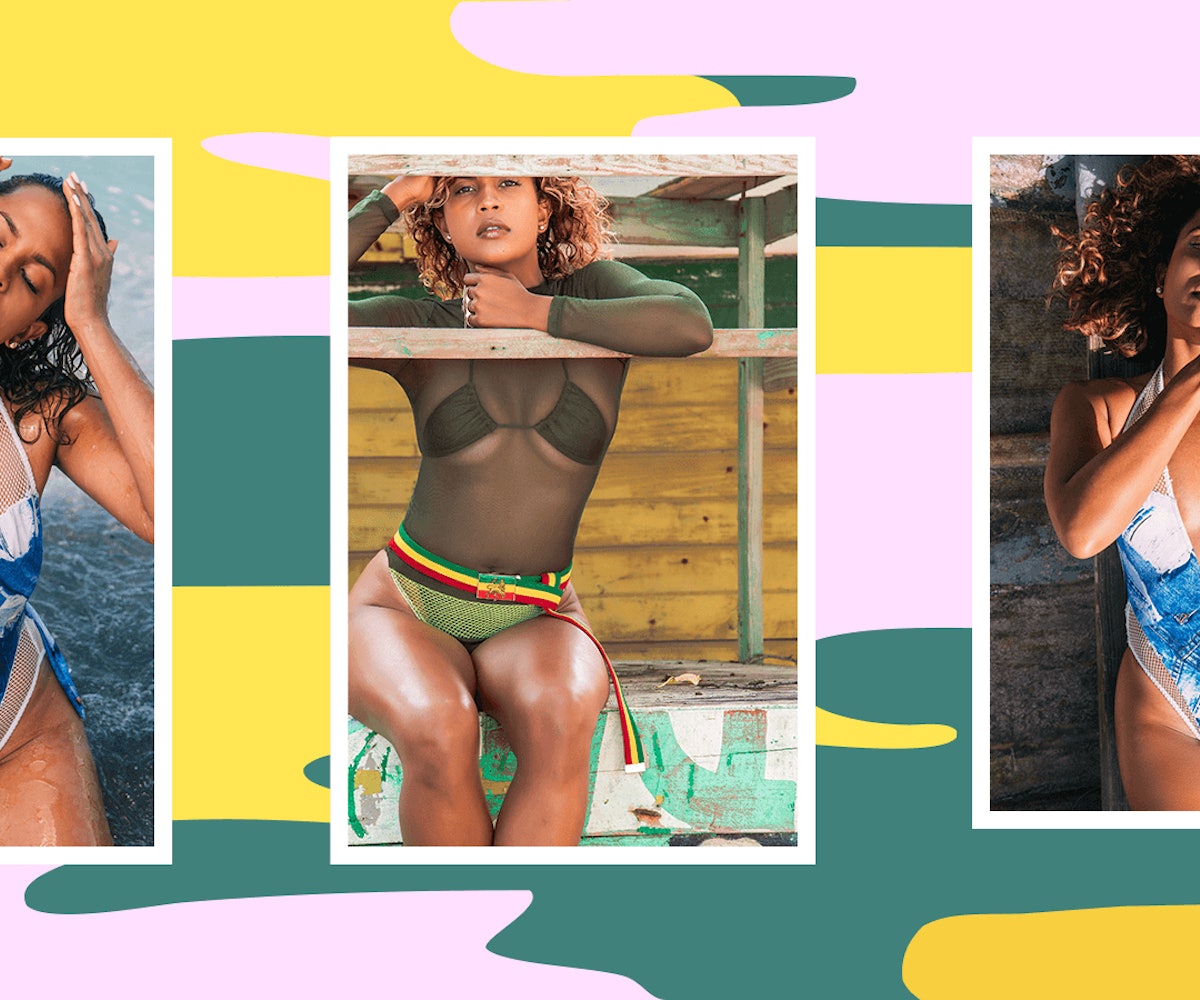 The greatest show on earth is not a Beyoncé or Rihanna concert (sorry, ladies!), but rather the vibrant and illustrious display of history, pageantry, and peak Caribbean design that takes center stage during Trinidad Carnival. Though there are carnivals all over the Caribbean and its diaspora, some with direct historic connections and some without, Trinidad's Carnival is deeply rooted to the history of its people, and every year is a celebration of its past.

Though Trinidad Carnival's aesthetic and practices have evolved over time, what's constant is the two most anticipated days: Carnival Monday and Tuesday. On Carnival Monday, revelers adorn themselves in "Monday wear," a muted-but-still-bold sister to the fullness that's displayed in Carnival Tuesday's costumes. But neither day is complete without having an inspired costume designer making inspirational looks, and that's where Keisha Als comes in.

If you're familiar with the Caribbean Carnival scene, then you've heard of Als; the Trinidadian-based trailblazer is widely known for her Carnival costume designs, particularly for her Monday wear costumes.

"The Caribbean has a plethora of amazing, talented designers," says Als. "The fashion is alive, and Carnival is definitely the center point for Trinidad and islands outside of Trinidad." With almost 10 years of design experience via Trinidad Carnival, she's been commissioned for other big festivals, like Barbados' Crop Over, and growing Carnivals in other islands and the diaspora, like Miami's Broward Carnival, Jamaica's Carnival, Notting Hill Carnival in London, and Sugar Mas in St. Kitts and Nevis.

Growing up in Trinidad, being indulged in Carnival and with a keen sense of curiosity, Als decided at 19 that she would try her hand at designing. "I was just talking to my friends, and I'm like, 'Guys, I'm just going to design a costume, and we're all going to play in it'. That thought just stuck and it never left," Als says. She flirted with styling before she settled on designing and has since been part of a growing wave of designers making power moves in creating gorgeous Monday wear designs.

We sat down with Als to talk about Trinidad Carnival, the science of Monday wear, how she stays innovative, and more.

What is your approach to making Monday wear?

Monday and Tuesday are completely different days. Tuesday, you're in your full glory. The star of the show. You're in your feathers, you're in your jewels, you're never wearing this piece again. You kind of max out on that experience of shining, but Monday there is versatility.

It gives you a chance to stand out in a different way because, regardless of how well you accessorize your costume on Tuesday, you still have a hundred other people in your piece, whereas Monday, there may be 10 other people. There's this chance to be a little more original on Monday.

In my experience, the pieces that have sold the best for me are the ones that offer masqueraders a chance to reuse that piece, so they know that when they're spending their money, they can use it as swimwear again, pair it with clothes, with a wrap or with pants.

How is your approach different when designing a full costume versus designing Monday wear?

They're two very different feelings. Costumes have sort of shifted along the lines of mirroring the body wear of Monday wear. If you look at a lot of Trinidad Carnival's frontline costumes [the more elaborate and expensive costumes, opposed to midline or backline costumes], they might have monokinis, which wasn't present five years ago. For the smaller island Carnivals, even though that's how we've evolved in Trinidad, I still like to give elements of a Trinidad-type carnival costume.

As much as I could have done a monokini for Queen of the Nile, I still wanted to do the [traditional] wire bra, that sexy, sexy type of costume because, to me, that's a costume. A monokini is not a costume. A monokini is a monokini. The costume that I did for Jamaica Carnival—the Queen of the Nile—[there are] Monday wear elements, the full-coverage monokini, and then you have a costume: two-piece wire bra and panty, the full works with the feathers. It's just beautiful!

Out of all of your designs, do you have a favorite?

I think my favorite would be a 2017 section in Yuma called INTI. I hadn't designed a costume for a few years because I was focusing on Monday wear. It just celebrated the moment that I was at in my life. It was fiery, but it was beautiful and sexy.

Talk to us about Tropix by Keisha Als.

Tropix started four summers ago, and I thought maybe I could do a little swimwear collection just to see how it works. I didn't really consider myself a swimwear designer. It wasn't something that I was prepared to do year-round. So I put it in my mind that Tropix would be something that I did specifically for the summer.

Every single one of my Tropix pieces is named after a tropical place in the Caribbean. Some of my best-selling pieces are JUJU, which is a beach in Barbados; another really popular one from Tropix season two is PORTIE, like Jamaica's Portland; and then Tropix season three's most popular piece is a monokini, it was called YARRA, and Yarra is a beach on the north coast of Trinidad. There's an energy in the collection that makes it a Caribbean product.

What does it mean to you to be on the frontiers of Trinidad's Carnival design scene, but also, by extension of your work, being a vanguard of Trinidadian culture?

This is the debate that comes up all the time. There is this one school of thought that [Carnival] belongs to Trinidad and, creating [costumes] for other islands or helping the other carnivals grow, it's almost like a betrayal of using your skill set to give another economy money when, in fact, that's a very armchair critic approach.

Trinidad Carnival started in Trinidad, it's flourished in Trinidad, but we have taken a festival of music, fashion related to Carnival['s] instruments, and we've been able to make it a home to people in the wider diaspora. The [other] islands have been inspired by us, even though [they] may not have historical [connections to] Carnival.

We have taken our culture, and our culture has been able to transcend hundreds and thousands of people over decades throughout the world from London to New York to Miami to wherever Caribbean people are, and that is a very beautiful thing. I would never stifle sharing that with the world, firstly.

Secondly, behind the scenes? The growth of other carnivals has created an enormous amount of revenue supply for local Trinidadian artisans: seamstresses, wire benders, featherers, designers, entertainers. The money is flowing in a way that it hadn't flown when I started to design. [During Trinidad Carnival], a seamstress now has a job. Right after Trinidad Carnival, she has hundreds of pieces to do for Jamaica. And then after Jamaica, she has hundreds of pieces to do for [other Caribbean and diaspora carnivals]. It is now year-round, and that is something that we have to give credit to growing our own economy, by supporting these small carnivals.