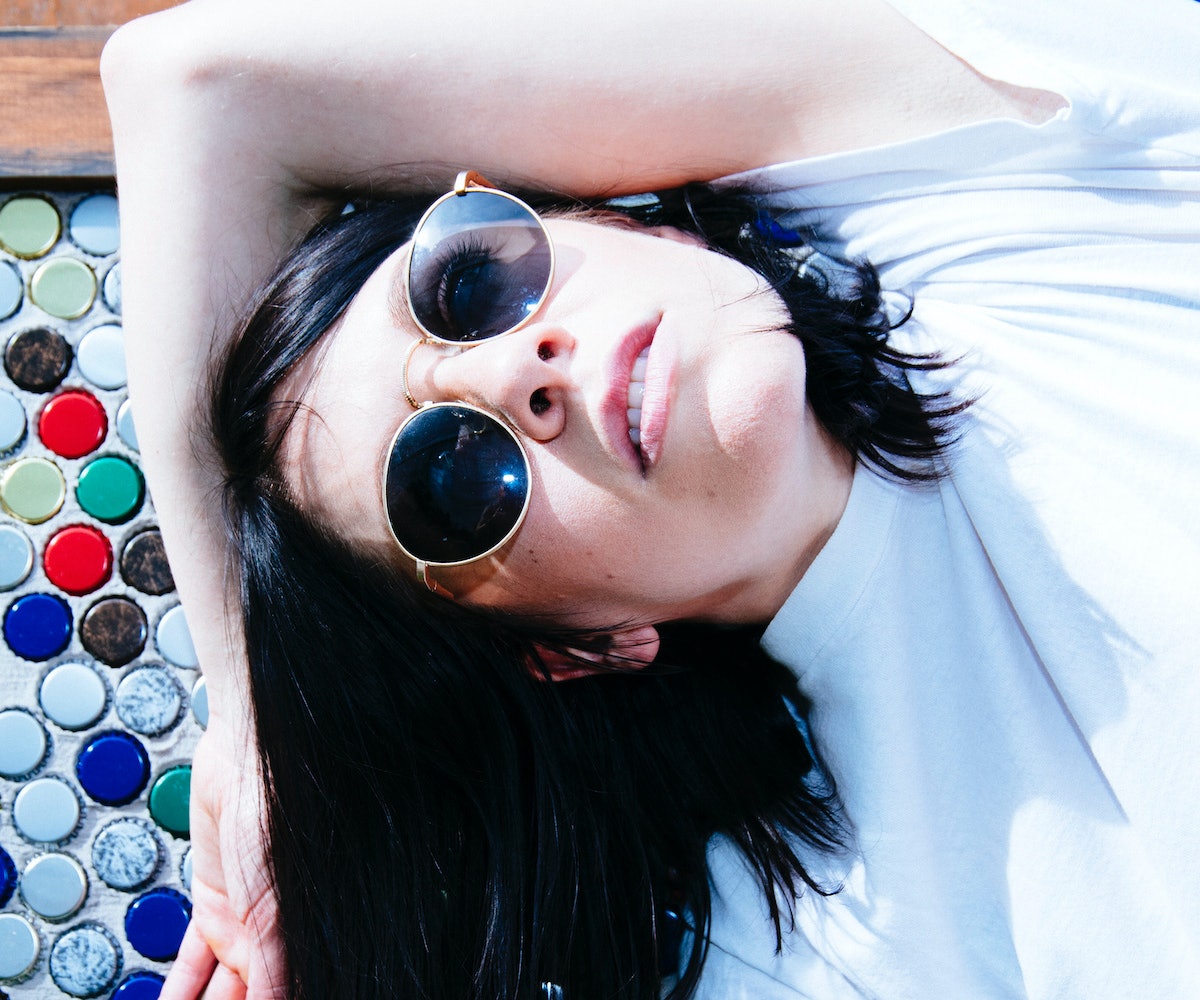 K.Flay is nothing less than fully authentic in her new studio album Solutions. Written after a long tour stint that left her a "broken woman," Flay, aka Kristine Flaherty, used the creative process to help discover the hope in her own life. Solutions isn't her first release—her major-label debut earned her two Grammy nominations in 2018—but Flaherty says that it's her most liberated. On it, she expands her signature style, experimenting with pop, rock, and hip-hop sounds within the 10 tracks.

With self-critical lyrics like "No I don't like myself some of the time/ 'Cause I fuck up a lot and fall behind" scattered throughout the album, the singer-songwriter holds nothing back, providing us with an honest look at the state of her relationships with her family, her girlfriend, and herself.

Ahead of the release of Solutions, NYLON chatted with K.Flay about the theme of the album, being vulnerable in her lyrics, and the political state of the U.S. Listen to Solutions and read the full Q&A, below.

This is your first album in two years, which is very exciting. What would you say is the album's overall theme?

The overall theme is the title. I feel like in the past I've explored problems. Instead of leaning into the problem side of things on this record—because all of the songs originated with similar moments of pain and anxiety and uncertainty—it was: How can I pivot and consider a different, possibly more productive way of reckoning with this feeling? Not just the pure catharsis of, I need to scream and say this, and this sucks. Thematically, on each song, I'm really just challenging myself to say: How can I find the catharsis in a more hopeful way, instead of the just pure emotion way?

I feel like you're very expressive and revealing in your lyrics, which I really appreciate. What would you say is your favorite lyric that you've written on this album?

I think it's from "This Baby Don't Cry." I have a line in there where I say, "I used to wanna say an early goodbye/ but I'm a disco queen/ I just keep staying alive." The more I live life, the more I really believe in that sentiment, which is that we all have these moments where it feels impossible to keep going. Somebody pointed out to me recently that when you wake up in the morning, one interesting way to view your life is that you've made it through every bad thing that's happened to you. I think it's actually a really empowering outlook. And it's a cheeky little fun line. My favorite thing to do is say something that's really serious but in a fun way. I'm basically saying like, "Yeah, there have been times I wanted to kill myself, but I didn't." I don't mean to minimize suicide or make light of it, but I think having a sense of humor about dark things is very important.

What is it like for you to be so vulnerable in the music you're putting out?

It's very liberating. It kind of feels like you're reading old diaries in public. That's a humiliating enterprise, you know? Even in private, you go back and read your diary from, like two, years ago, and you're just cringing. But when you're engaged in a constant state of humiliation, it becomes very, very freeing. It creates this state of unselfconsciousness, and that feels really good. It's so time-consuming and so annoying and—on some level—boring to be self-conscious. I feel really lucky that my job affords me the opportunity to eschew that.

In "Not In California," you talk about the state of the planet. Personally, how do you see us improving our reality?

I feel like this group of people that I interact with has a set of values and a way of living that is so fundamentally different to the set of values and the way of living of the people who are in political power have. The people around me are becoming more and more curious and open, more and more tolerant, more and more experimental, more and more conscious of the environment, more and more interested in how can we use technology for good. We have a president who is very old, incredibly privileged, and totally uncurious about the world—all these things that are just so diametrically opposed to what I see every day. I think the first step is being mindful of that difference. It's starting with a lot of people—young people, people of color, women, LGBTQ people—running for office. We need honorable leaders. That's what we're missing right now. I don't know, maybe I'll run for office.

We've had a variety of shows already this year, and we've been playing about half of the new record. I will say "This Baby Don't Cry" is really fun to play live. There's a sort of attitude in that song. It feels like it's meant to be performed on stage. Now, with another album, there's quite a bit of music to consider with my live shows, so I'm just really excited about creating a new live experience. I'm pumped to be out there and to create a space where people can scream and cry or stand still or be sad or be happy. Whatever people want to do. There's a space for all of it.

Where do you hope to see yourself in the next five years? Either music-wise or in your life in general?

This past year I've been doing a bunch more songwriting for different artists, which has been really fun. I'd love to keep doing that. It's hard to pinpoint exactly, but I guess just expanding. Never settling for anything, always just reaching for something new. Not because of material reasons, but because of my genuine interest in becoming a bigger person. Keep getting bigger.