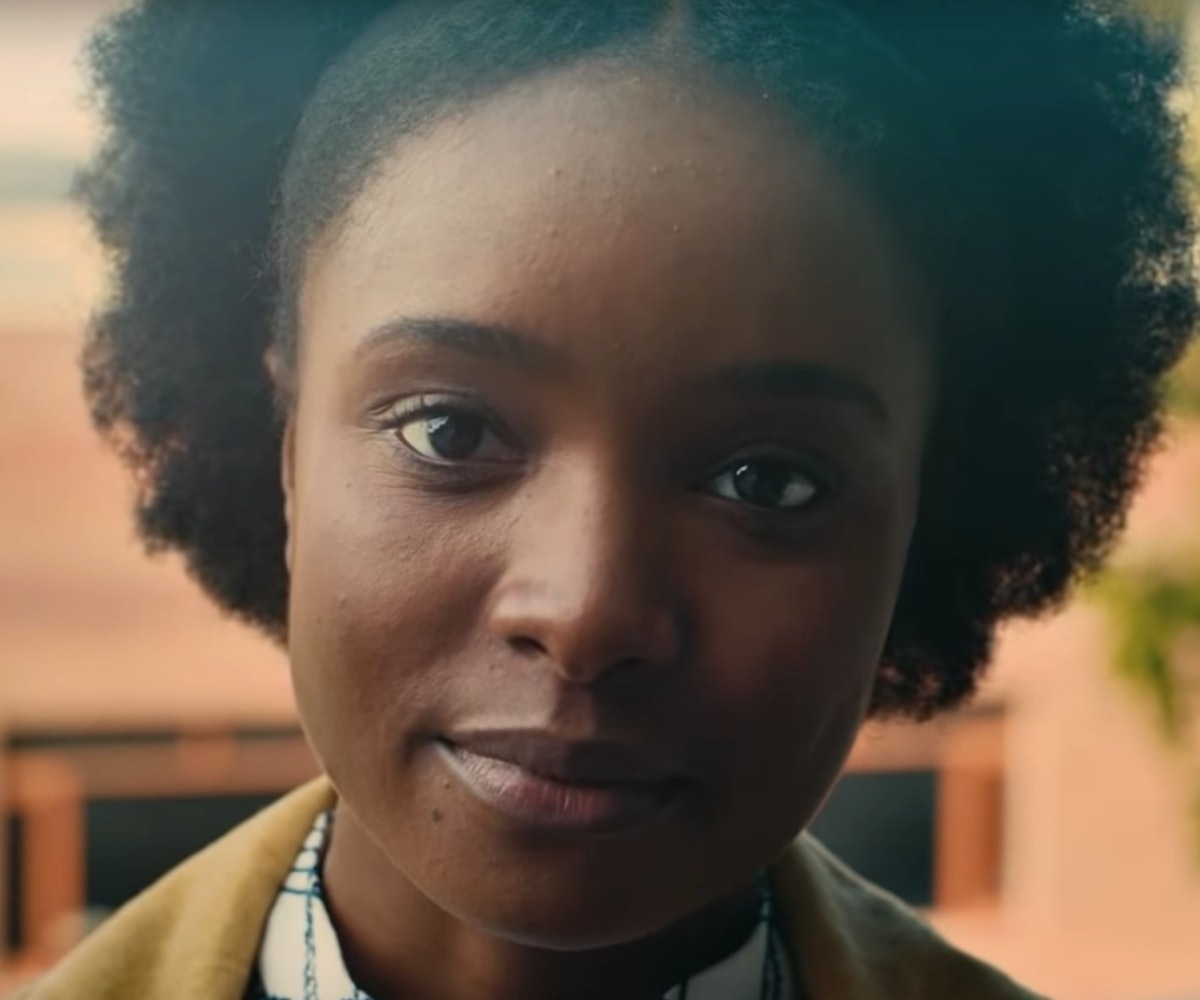 KiKi (short for Kiandra) Layne is from Cincinnati, Ohio, but you'd be forgiven for assuming she's from New York, a city where she spent a significant amount of time last year, working on Barry Jenkin's highly anticipated film adaptation of James Baldwin's If Beale Street Could Talk. Layne stars as Tish, alongside Stephan James's Fonny; they play a couple in Harlem, whose lives are torn apart after Fonny is arrested for a crime he didn't commit. He's sent to jail, and a newly pregnant Tish devotes her time and life to proving his innocence.

I caught up with Layne recently to discuss Beale Street, trusting Jenkins, and finding strength in being vulnerable.

But first: After our chat and before we parted, I asked Layne a question that's been on my mind: "Do people sing Drake's 'In My Feelings' to you a lot?" "Nonstop" she tells me while laughing. So, if you see Layne, resist the urge to sing Drake at her, and, instead, talk to her about what it was like to work on one of the most powerful movies of the year.

I read that Barry Jenkins auditioned over 300 actresses for the role of Tish, and it obviously took trust on his account to hand the role over to you, but, on your end, what about Barry made you trust him?

Watching Moonlight, I just recognized this patience in the film—allowing moments to live and linger—and I just thought that was so beautiful. Seeing all of these beautiful brown faces and having that patience for them to live in whatever it was that they were living in; I was just so blown away by the artistry that I recognized in Moonlight—the colors, the music. So, when I saw Barry Jenkins and James Baldwin, I knew it was gonna be something special. I hadn't even read Beale Street, but with those two names, there's no way this isn't gonna be something powerful.

Did you read the book after?

The relationship between Tish and Fonny was one of the draws for you to the film. What specifically about their relationship appealed to you?

They're soul mates, and I feel like we don't really see black people portrayed as soul mates, where there's, like, a soul-tie involved. I think Barry said something like, "If these two characters could exist in a vacuum, they would spend every moment together." And so I was just so drawn to that, and then the book is all these different colors about the history of them being five or six, that being where it all started. I just thought that was all so beautiful.

Their relationship is very intimate and close, and that comes across on the screen between you and Stephan. I'm wondering what it took to get to that place. What kind of preparation did you both do?

I mean we really didn't get any rehearsal or preparation. I just think Steph and I recognize that the relationship between these two people, it's critical to the film. It is the film. And so I think we both understood that and understood that serving this story to the best of our abilities meant letting some of our walls down a lot faster than what most people would do. And we just had to, you know, jump in. But thankfully we were willing to go there together, and then Barry created this environment on the set that just made it a really safe place. Even though Steph and I were strangers, the energy on the set and everything that Barry was giving us made us comfortable to portray these people who have been connected since they were so young.

You mentioned black love earlier, and, obviously, this isn't the first depiction of black love on film, but I've never seen it displayed so beautifully and nuanced. I'm wondering if you remember the first memory that you have of black love being portrayed on the screen?

Two things popped in my head: Love and Basketball and, actually, Fresh Prince. That was one of my favorite '90s sitcoms. So, Uncle Phil and Aunt Viv, and then Monica and Quincy. Love and Basketball particularly for me, because I was kind of a tomboy growing up, so I just thought it was cool that, like, tomboys can get love, too. And just seeing how their relationship formed and then they went away from each other and then it came back. I just thought it was really cool.

And then, well, Fresh Prince. To me, I think it was the whole family dynamic, which also Beale Street represents really well, what black family love looks like. I think with the Fresh Prince, there were all of these really interesting personalities and characters, and yet there's so much love in that household.

You've mentioned that vulnerability and intimacy aren't feelings that come naturally to you, that you don't evoke them as well as Tish does. What did it take to get you to tap into those emotions and feelings?

A lot of trust for the people around me—like, really trusting Barry and Stephan. I also just had to learn that there's so much strength in all of that love. I think I have an idea of strength as being able to do so much on my own, and just being really independent. So, in doing this film, I learned that if you have all of these people around you, that's powerful. And it's powerful to be connected to someone like that and have somebody in your corner like that and for you to be in someone else's corner like that.

The shots in the film are very beautiful but they're also capturing real intimacy. James Laxton, the cinematographer, often does these very close, very intimate close-ups, which I imagine for you, the actor, is very hard because you can't break character and any change of facial expression is obvious. What it was like to film those scenes?

Those moments came organically; none of those shots are planned. Barry, I think he describes it as "these moments where the divide between the character and the actor is just basically nonexistent." It's just, like, we are in it. And so, because that's when these close-ups happen, you're just in it.

The first couple of times, it was a little strange just looking into the camera, but still communicating all of these emotions and feeling so many things. So again, like I had to learn to trust that as long as I'm feeling it, which in those moments Barry recognizes I am, then it's gonna be communicated. Whatever it is that needs to be said will be said. But yeah, it definitely caught me off guard the first couple times.

You've described it as staring into a black hole.

Yes, which Barry Jenkins will never let me forget that I said that one time [laughs]. It's really just about the giving and receiving that's such an essential part of acting, and so when looking directly into the camera, you aren't really receiving anything, you know? Even being on stage, if I'm talking directly to the audience, I can see how you're reacting to what I'm saying, and that can thus inform what I'm saying. So, in those moments, I had to learn that it's about me just letting it be, just letting it out and being there, and that on the other side of that, these audiences will receive it. Watching it, I understood, I'm like, "Oh, that's what these moments were about." But those first couple times actually doing it, it was a little off-putting. Like, my scene partner's right there, why can't I just talk to my scene partner?

The movie is a story about criminal justice that's kind of wrapped up in this love story, and, throughout the film and the book, there's this push and pull of despair and hope, but the film ends pretty ambiguously. In just knowing Tish and Fonny's relationship, where do you see it going after that final scene?

She's waiting for him, and that's that. Like, they are going to be together, so that's where the hope comes from, because it's like, okay, his sentence has an end date. But the pain of it is that this was something they never should have had to wait for anyway. This is a circumstance they never should have even been put in, but you can see that their love is still surviving and definitely, once he's out, it's gonna blossom again. That final scene holds so much hope in it and still very much so much pain. But he's coming home.

Your next film is Richard Wright's Native Son. What was it like transitioning from Tish to your new role?

I definitely learned so much just about being on set and trusting myself more on the film set, which I think was very, very helpful in terms of me portraying Bessie. It was cool to be in more of this supporting role, because it's really a Bigger [Thomas] story, and Ashton [Sanders] is so phenomenal. I was a lot more relaxed and a lot more trusting from everything that I had learned playing Tish. But it was interesting to explore a different love dynamic. Like, there's still so much love between Bigger and Bessie, but there's definitely all these differences versus, you know, what Tish and Fonny have. So it's interesting to play in black love again, but with different colors.