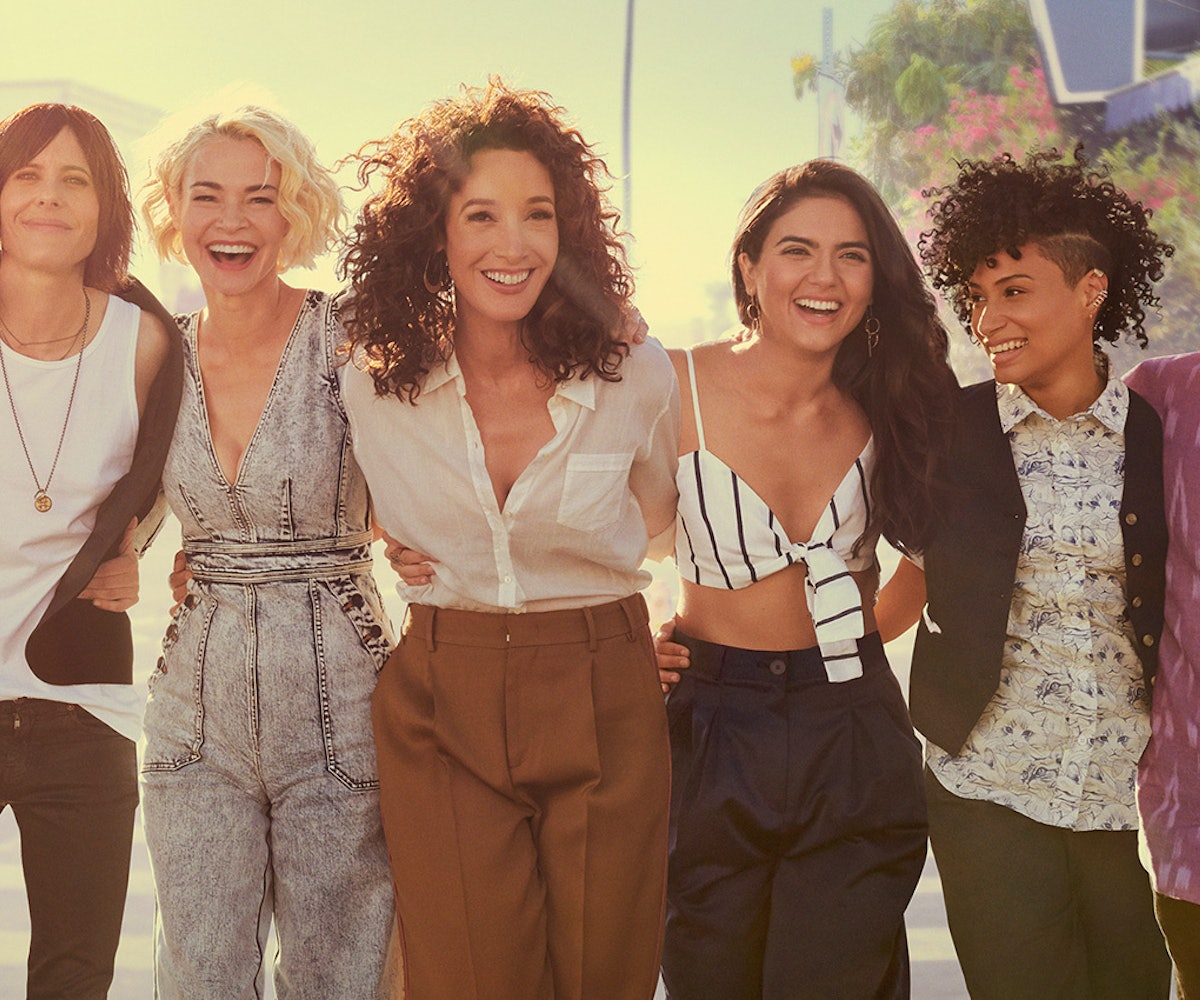 When the first season of The L Word premiered on January 18, 2004, it felt as though a huge boulder had dislodged from the entryway of a cave and the world's population of lesbians filed out of their hiding places, one by one, shaking dirt out of their asymmetrical hair, pulling their Ray-Bans down from on top of their heads, squinting at the world around them while their eyes adjusted to the sun for the first time in ages. Queer as Folk, Showtime's LGBT drama, which centered very primarily on the "G," had already been out for four years and, while that was fantastic, the "L"s of that equation had been starving for something to call their own.

Sure, there were exciting glimmers of hope in pop culture — that lesbians could weave together to make a whole out of many pieces — prior to 2004. We got to see Willow (Alyson Hannigan) kiss her girlfriend Tara (Amber Benson) a few times during the course of their three-season relationship on Buffy the Vampire Slayer, during half of which the showrunners gave Tara a mental health disability before finally just killing her off. Before that, we had Nancy (Sandra Bernhard) on Roseanne, who was primarily written in as a setup for the rest of the cast's "no homo" jokes, and eventually settled down with a man. So while there were a few characters on television that those who identified as lesbians could watch and attempt to squeeze some sense of belonging out of — and we/they did! — it wasn't much, and we never had any of the characters for very long. That is, until Showtime gave us the mother load, with a capital L.

When The L Word happened, it almost felt too good to be true, but there it was, in all its low-rise jeaned, tribal tattooed, dramatic shutting of a flip-phone'd glory. And we got to call it ours for six (should have been five) whole seasons. Now looking forward to the show's sequel, The L Word: Generation Q, which premieres on Showtime on December 8, the sun will shine on the talking, laughing, loving, breathing, fighting, fucking, crying, drinking, riding, winning, losing, cheating, kissing, thinking, dreaming lives of the lesbian and lesbian-adjacent community in a way that it hasn't since the premiere of the original series.

As exciting (REALLY EXCITING, MAKE NO MISTAKE) as that is, there's an underlying bracing for what's to come. The original series, while overtly well-intended, had its problems; it was accused of doing the LGBT community wrong in many ways, as seen by the backlash it received starting from episode one. The show was often criticized for white-washing, setting the scene in a West Hollywood that, according to the showrunners, had only like five people of color living in it, and for its cringingly bad handling of its sole trans character Max. This was in the early 2000s, remember. We were so young then. So naive. So ignorant. We've come, not a long way, but a measurable distance. We know so much more now. And with knowledge comes expectation, and a certain level of responsibility on the part of the sequel.

The little that we know about The L Word: Generation Q looks promising. The setting has moved from West Hollywood (think: Vanderpump Rules' SUR, celebrity home bike tours, Chateau Marmont) to the hipper, younger, queer-er, more diverse locale of Silver Lake (think: dive bars, ramen restaurants, Elliot Smith murals). The only original characters announced so far, Bette Porter (Jennifer Beals), Shane McCutcheon (Katherine Moennig), and Alice Pieszecki (Leisha Hailey) lead a brand-new ensemble of up-and-comers through a whole new cat's cradle of sexy drama and homo hijinks. Many faces have changed, but the biggest change is right there in the title itself. The L Word: Generation Q brings us into the present, in every sense of the word. During the years in which the original series aired — 2004 to 2009 — the word "queer" had a much different use in our vocabularies. Queer was, for the most part, still used as either a dig, as a way of describing something the person coming in proximity to it had no other association with, or, within the LGBT community, as a playful term of endearment. When the L Word first came into our lives, it was for lesbians, which there were still plenty of. Now, it would not be a stretch to say, not so much. In 2019, and forever onward, "queer" is the go-to for young people, and those of us following their lead, to describe what we all are, as a family, and so much less so as a smattering of disenfranchised members of, essentially, the same team. There is far less focus now on the titles of lesbian, and gay, and more on a general culture of queerness that brings the previously fractured, the sub-groups, the other-ness, into one big melting pot of inclusiveness.

This is new territory for the L Word, a show that was fine with dialogue like "Oh, Christ Alice! When are you gonna make up your mind between dick and pussy? And spare us the gory bisexual details, please." A show that was written by, and catered toward, a certain breed of '90s-era proud as punch lesbian, the sort to brag about gold stars, and turn their noses up at any sort of sexual fluidity that didn't very strictly fall under straight-up "lesbian." This is no longer the world we live in. This will be interesting to watch unfold, especially remembering what a difficult time the showrunners had with coming to even a very basic understanding of the trans community in the original series. If they struggled with "T," how the hell are they gonna deal with "Q?"

In its first run, we had Max Sweeney, formerly Moira, played by the talented and graciously patient Daniela Sea. The character was introduced in the third season as a plot advancer/love interest for Jenny (Mia Kirshner). We met Moira as a charming soft butch from a small town, and watched her get dragged to Los Angeles by Jenny and forced into a series of painful-to-watch fish-out-of-water scenarios. Later in Season 3, and into Season 4, Moira transitions into Max, the show's first trans character, but the character is never, in this writer's opinion, and that of many critics of the show, given the respect he deserved. A prime example of the mistreatment of Max is when Alice, the show's main bisexual, tells him that he can't be featured on her video podcast, OurChart, because it's just for lesbians, and he's trans, so he doesn't count. Those times, and that way of thinking, are over. Will the showrunners toe the line, knowing that their audience is now of the sort that will not, capital NOT, stand for it? We find ourselves wanting to be optimistic because even after all this time, the L Word is pretty much all we've got.

In an episode of To L And Back, an Autostraddle podcast that recaps each episode of the L Word, Riese, editor-in-chief of Autostraddle, and original co-host Kristin Russo, interview Guinevere Turner, who played the character Gabby Deveaux and was also a writer for several seasons. The hosts ask her to comment on the backlash the original series received, and Turner responds by saying that the showrunners, and cast themselves, suffered from "the burden of representation." When the sequel airs, that burden will be heavier than ever, when presented to the carefully responsible scrutiny of the LGBTQ community as it lives and breathes in 2019. We bitched and moaned about the original series, while still watching, eating up all the wins and losses hungrily. Would it be too much to expect better now? Enough time has passed to allow for a great deal of learning. Even understanding that, yes, this is television, and not every person will find themselves in these new characters. What will matter is the trying. Let's hope that with Generation Q, they tried just a tad bit harder. And let's hope, this time, we get to see Jenny's ghost waving from a waterfall. We need that, too.