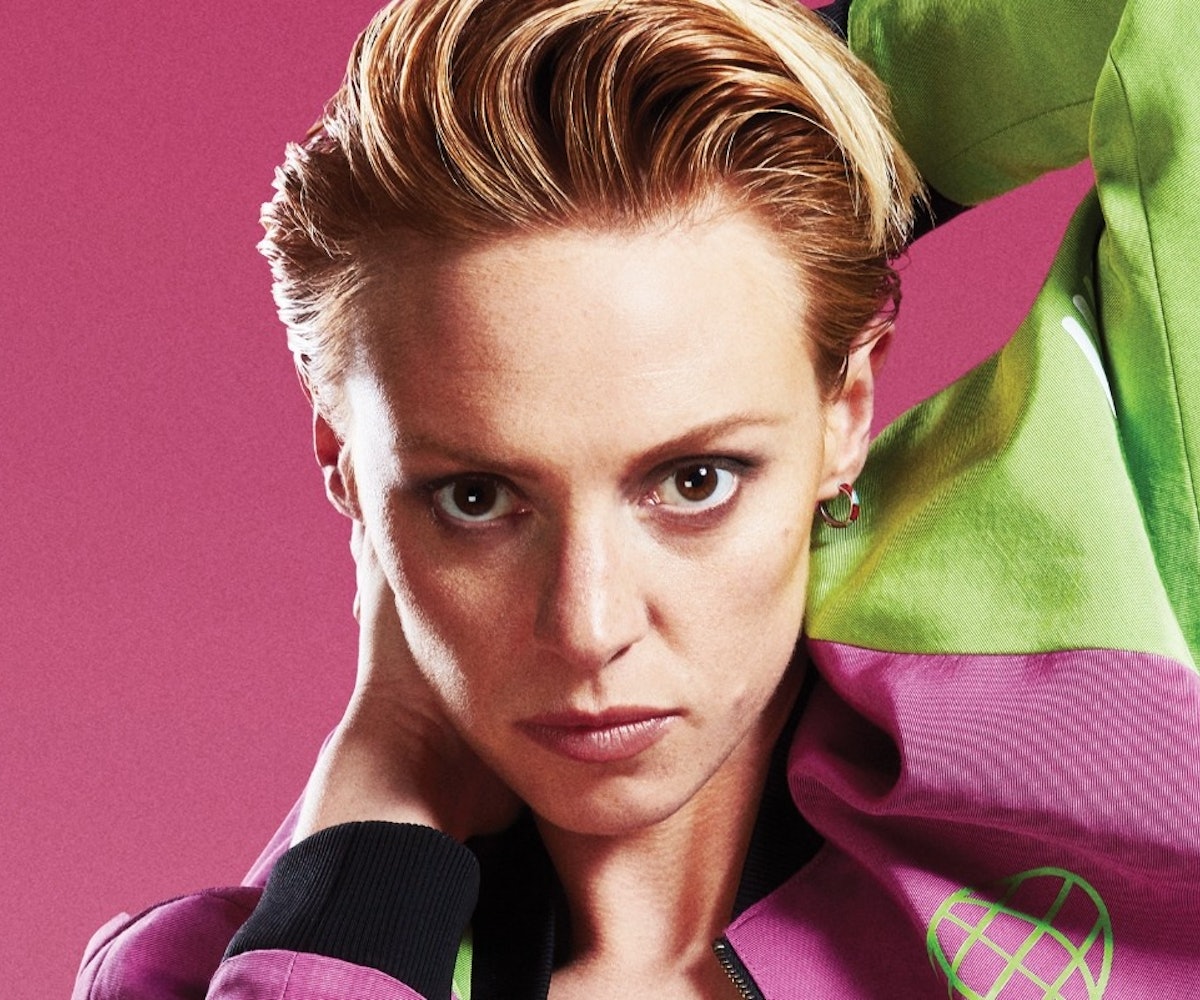 The story of La Roux's return to music after five long years of silence is a bad story, and a good story. Following the release of her 2014 sophomore record, Trouble in Paradise — which was only born after Ben Langmaid, the producer of the electronic pop duo, left the group in 2012, leaving Elly Jackson to wrangle the nine tracks into shape — Jackson found herself in a creative rut. "I was working on a record for three years, and it was starting to terrify me," she explains over the phone from her home in London, nursing the end of a cold. "[It's] energetic, personal pop music. It shouldn't be so painstaking."

Living up to the incredible success of La Roux's 2009 Grammy-winning debut album had already proven to be difficult once, and Jackson was falling into that familiar spiral creative paralysis. Working with different producers, she found herself feeling stifled and frustrated: the music was going nowhere she wanted, much less at the speed she'd wanted. So she scrapped everything, and tried again — that was the good part.

Supervision, which drops February 7, is the long-awaited result of the process, one that found Jackson fully taking back the creative reins and delivering eight tracks of pure, dance-worthy pop, including the infectious "Automatic Driver," the song and video of which she released on Thursday. Written around a difficult breakup, Jackson relates what happened with near scientific terms. Backed by a buoyant, thumping beat, it comes together like a lovelorn AI experiencing heartbreak for the first time. "It feels mechanical," she says of the song, "But it also gives [it] an edge. That's what La Roux has, [and] makes me what I am."

Below, Jackson recounts the long and hard road to get to where she is today, the lessons she learned from having to start over, and the difficulty of being an artist in the fast-paced age of streaming. And as for her, personally, "Do I expect to have a global number one type hit like the "Bullet Proof" situation again? God no."

What have you been up to in the last five years?

[Laughs.] Let me get the answer out of my bag. It's a bad story and a good story. The bad story is that I was making an album and I had to throw it in the bin, but that was also the best. So I was working on a record for three years, and it was just starting to terrify me that it hadn't felt like three years.

There's procrastination and there's perfection and then there's pretension. I'm not dismissing my music in any way shape or form, but essentially it should be energetic, personal pop music that shouldn't be so painstaking. I'm trying to make people feel good and write great bass lines and stuff, but all of that stuff is not necessarily better if it takes years and years and years. I started to realize that it wasn't my part of the job that was taking a long time, it was the person in control of the computer, that possibly had a procrastination issue. It was starting to really worry me because I felt like I was at the mercy of somebody's issues. I will say it was my own problem that I wasn't standing up and saying "Hey, what the fuck is going on?" Basically that's what took up most of the time. This album is a very small part of the story in the sense that really I just stopped what I was doing with that album, started making this album, and I had a great time and it was done. It's kind of weirdly simple.

When did the concept of Supervision begin to form in your head?

I think probably if there was a moment it was when, a friend of mine and my sister's friend were here and just hanging out at my house. I heard one of them say, "I've been supervised," but I heard it the other way. Nothing complicated about it, nothing clever about it, but it just felt so right for what I'd been working on. I knew I didn't want it to be any of the track names so I don't know, I just heard the word and it all sort of became clear from that point onwards. If I said there had to be a concept I would say it's balance. It's like finding balance within yourself, and this album is a process of me finding the balance.

Finding that balance, did you learn anything new about yourself or your creative process?

From a creative perspective I realized that for maybe, like, eight years, even though I was kind of writing, I kind of wasn't. It was like everything was from a place of trying, everything was very regimented, partly because of the person or the couple of people I had chosen to work with over that period. I've learned that me being in any environment that I'm not 100% comfortable with, and that I don't take full autonomy in, I clam up completely, regardless of how talented that person is.

It gets to a point in your life where you're still trying to find that feeling that you used to have in your bedroom when you were eighteen and you just pick up your guitar because you had to emotionally. I just felt like I hadn't had that. I felt like I needed to pick up the guitar for the sake of my career, for my label, to prove a point or something. That's where I got lost and that's what I found again on this record. But also learning, if you put your mind to it there's nothing that you can't do. Which is such a basic concept that we all get taught in childhood but I think to actually take it on properly is harder than it sounds. All the little tricks that I would've asked an engineer or somebody to do, now I just do them myself.

Did you have any worries or fears about coming back after a long absence?

Yeah, but at the same time there's kind of no point because it is what it is. Sometimes I'm like, Yeah, I'll never be a brand new artist again. I'll never have that currency of youth and newness and novelty that I had when I was 21, but the minute I stopped being 21 I stopped having that. I'm really glad that people are excited to hear my music and I'm not bored of my sound; I haven't oversaturated myself. So I try to focus on the positives rather than the negatives, which is that time moves a lot quicker now than it used to. The music industry's changed, all the platforms have changed. The way music is bought and sold has changed. And what's valuable has changed. But I can only be who I can be.

Do you ever wish it weren't that way? Maybe to find a path to work outside that system?

I think where the music industry's gone really wrong is that it's lost all faith in humanity. Back in the '60s, you used to have DJs and people that were almost like music pundits; they were the only vehicle for music to travel from nowhere to somewhere. You had to have good people with good taste at radio, who were like, Hey this band is shit hot, I'm gonna f*cking play it to all my listeners. Now, that is the opposite of the situation. Most of the things that radio DJs like, they're not allowed to play because they're not really allowed an opinion — the public is being patronized to the Nth degree! I've heard people say stuff like "People are too stupid to listen to that for more than 30 seconds before the chorus comes in." I think the level of impatience because of phones and technology has become unbearable. Even for me, sometimes I watch a teaser of something I'm gonna put out and I'm bored of [my] own teaser and it's only been on for five seconds. But people are not stupid. I think the level of risk assessment and fear and worry at labels, it's permeating music. I think anyone who believes in the energy flow of anything, can understand that if that's what you're putting into something, that's what's going to come out.

Do you have any expectations for this project that you're about to put out?

No I don't. Because of all the stuff I just said it's impossible to have expectations anymore. I think mostly what people want from [artists] is just to feel like they're doing their thing and they don't want to stop doing it, and I think that's the best place an artist can be in. As long as I'm making music that I love, and I'm doing things that I am passionate about... I won't go away for five years again because that definitely wasn't intentional. I kind of just have to do what I'm going to do and people are going to receive it how they're gonna receive it. Do I expect to have a global number one type hit like the "Bullet Proof" situation again? God no.