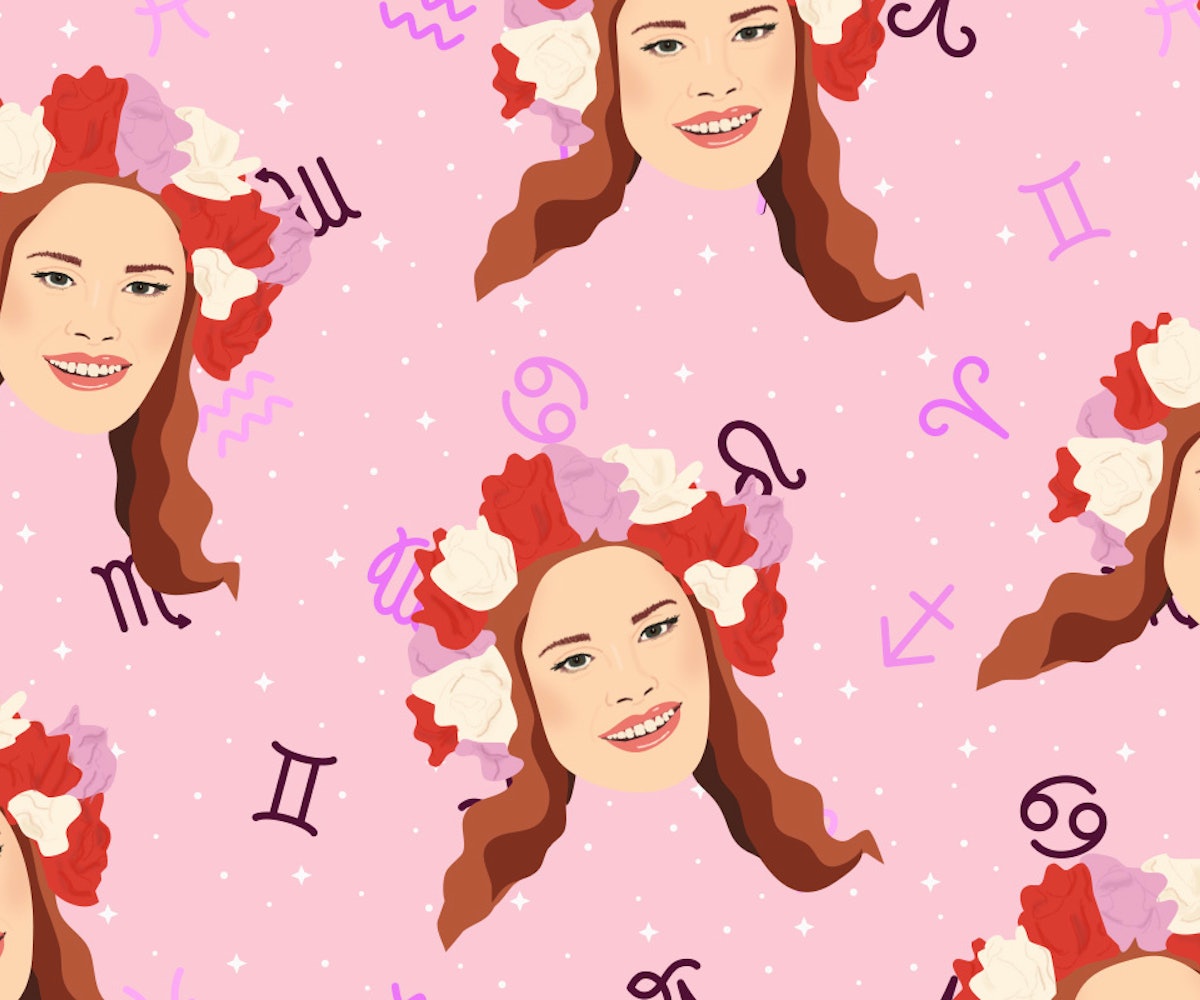 There's something inherently mystical and ethereal about Lana Del Rey's songs. The singer-songwriter's music is atmospheric, crafting a new world that's unlike ours — where feelings take on colors, Diet Mountain Dew and Pepsi Cola taste like love and sex, and summer is a season of sadness. While her lyrics don't ever cross into overt astrology territory, they often reference the sun and moon and stars, as well as feel like they could both predetermine the future and give clarity to the past. So much so that there seems to be a Lana Del Rey song for every zodiac sign.

Now, I am no expert in astrology (for that, please see the musings of NYLON's resident astrologer Gala Mukomolova), but I am one in the lyrics of LDR. I also share a birthday with her, which I believe adds some astrological credibility to my choices... though I am a Gemini and not a Cancer like Del Rey recently revealed herself to be. While we're on the subject, of course Lana is a Cancer. What, with those emotional lyrics that flood and overwhelm all senses, that can get even a stoic Capricorn in their feelings? But also, wouldn't it be such a Gemini move to claim to be a Cancer just to see people get heated up?! But I digress.

Below, read on for the Lana Del Rey songs that best describe every astrological sign.

Only an Aries, a sign that's used to always getting what it wants, would ask a lover to "come to California [and] be a freak like me," as LDR does on "Freak" from the Honeymoon album. The rebel of the zodiac, an Aries would also be comfortable with saying something like "screw your anonymity/ Loving me is all you need to feel" in the name of love. And with an Aries loving as fiercely as they typically do, maybe it's really all one needs.

A sign that enjoys everything beautiful and luxurious in life, a Taurus would take pleasure in the things Lana lists on Ultraviolence's "Old Money": "Blue hydrangea, cold cash divine/ Cashmere, cologne, and white sunshine." And while a Taurus is a complete boss on the surface, it doesn't mean that they aren't prone to falling hard for someone and losing control. Similarly, the song starts with the illusion of control before spiraling into a plea for a love: "If you send for me, you know I'll come/ And if you call for me, you know I'll run/ I'll run to you, I'll run to you."

Geminis are notorious for their dualities, which would make "West Coast" from Ultraviolence, a song that sees two different sides to Lana Del Rey, the ultimate twins song. Take these lines, for example: "You pull me close, I push away, I'm feeling hot to the touch/ You say you miss me and I wanna say I miss you so much/ But something keeps me really quiet, I'm alive, I'm a lush." Even LDR herself, in a 2014 statement, commented on the seemingly contradictory nature of the song: "It's so wrong and exquisite." That's exactly how the air sign would describe themselves.

Leave it to the emotional Cancer to get "that summertime sadness" during a season that most others see as joyful and carefree. While obviously Cancerian in its lamenting of the end of warm-weather days, "Summertime Sadness" from Born to Die: Paradise Edition is also a reminder of how "electric" and "sizzling" these water signs can be — when they finally choose to leave their homes and attract every single person in their wake. These are lyrics from a Cancer on a mission to dazzle the world: "I got my red dress on tonight/ Dancin' in the dark in the pale moonlight/ Done my hair up real big, beauty queen style."

"Um, do you think you'll buy me lots of diamonds?" — this unabashedly confident line alone is proof that "National Anthem" from Born to Die: Paradise Edition is the ultimate Leo song. Statement-making, self-assured, and powerful, these signs would declare, "I'm your national anthem," and we would be happy to accept it as fact and rise. Also, only a Leo would follow that statement with a "Can we party later on?" Spoiler: "He said, yes."

Now, I know what you're going to say. Why would you choose Honeymoon's "High by the Beach" — a song about, as the title suggests, getting high on the beach — for the control freak of the zodiac?! Here's my answer: Because every perfectionist needs a day off, for someone to "take the wheel," because they "don't wanna do this anymore." What do they want to do instead? "Get high by the beach, get high." That's why.

Can "Video Games" from Born to Die be anything but a Libra song? Well, yeah, it can belong to Gemini who loves playing any game. Or Cancer, who has a romantic flair. BUT, with its timeless quality and lyrics that will feel just as relevant in 10 years as they did in 2011 when the song first came out, it has to belong to the most balanced and fair sign of the zodiac. One who would look at the words with some healthy skepticism while appreciating the dreaminess: "It's you, it's you, it's all for you/ Everything I do... Heaven is a place on earth where you/ Tell me all the things you want to do... They say that the world was built for two/Only worth living if somebody is loving you."

Not the most subtle when it comes to astrology signs, a Scorpio is constantly "fresh out of fucks, forever," which is how Norman Fucking Rockwell's "Venice Beach" starts. Scorpio's go-to signature look, like the song suggests, includes "jeans and leather." Wielding the power, always, they would come back into your live after years of absence with the words, "It's me, your little Venice bitch," and disappear again with, "Signin' off, bang bang, kiss kiss."

A Sagittarius loves a good story. Not only is "Young and Beautiful" from The Great Gatsby,based on F. Scott Fitzgerald's classic novel, but it sets the scene right away: "Diamonds, brilliant, in Bel-Air now/ Hot summer nights, mid July." It then tells the tale of a young love — "When you and I were forever wild/ The crazy days, city lights/ The way you'd play with me like a child" — before looking at the future: "Will you still love me/ When I'm no longer young and beautiful?" It's a story a Sag can get behind.

Even though it may appear that a Capricorn is too pragmatic for a song called "Love" from an album titled Lust for Life, we have previously argued that Capricorns make the ultimate cult leaders for the way they can inspire generations of people to follow them. There is something very Capricorn-like about the way the song seems to sing to a captivated audience of listeners hanging on to every word: "Look at you kids with your vintage music/ Comin' through satellites while cruisin'/ You're part of the past, but now you're the future... Look at you kids, you know you're the coolest/ The world is yours and you can't refuse it." Any Lana song with a "daddy" reference is automatically a Capricorn song too.

I have known thatNorman Fucking Rockwell's "Hope is a dangerous thing for a woman like me to have - but I have it" is an Aquarius track since after I read this Billboard interview with Lana in which she said that "it was staggered with references from living in Hollywood and seeing so many things that didn't look right to me, things that I never thought I'd have permission to talk about, because everyone knew and no one ever said anything... The culture only changed in the last two years as to whether people would believe you." Altruistic and humanitarian, an Aquarius has a hard time tolerating injustice. Also, that Sylvia Plath (who was an Aquarius rising, BTW) reference? Made with an Aquarius in mind!

Creatures of the water, Pisces would fall for all the references of the color blue on Ultraviolence's "Black Beauty": Oh, what can I do? Nothing my sparrow blue," Life is so beautiful, but you don't have a clue, sun and ocean blue," "Darling you can't let everything seem so dark blue," etc. Sensitive and romantic, this sign would also appreciate the love song aspect of it, where Lana pleads for her lover to see the world like she does: beautiful and blue.