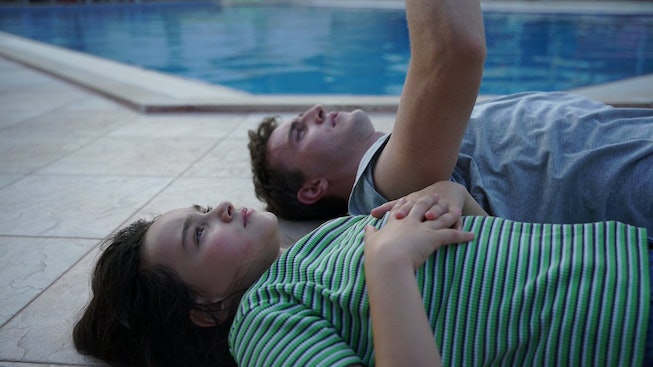 In under two minutes, the trailer for Aftersun is hitting some specifically fragile corners of people’s hearts. Fair warning: The trailer for the new A24 film starring Paul Mescal will threaten to tenderly poke the wounds of your inner child, particularly if you’ve ever had an aloof parental figure both disappoint and dazzle you.

The film, which is the directorial debut of Charlotte Wells, which is partly told in nostalgic film footage, stars Mescal as an adrift father on vacation with his 11-year-old daughter Sophie (Francesca Corio) in Turkey in the late 1990s. The narratives converge as a present-day Sophie Celia (Rowlson-Hall) reflects on the tense trip with her father 20 years prior.

During the trip, Sophie asks if he will ever move back to Scotland; he declines. “There’s this feeling once you leave where you’re from that you don’t totally belong there again,” he tells her. “You can live wherever you want to live. Be whoever you want to be.”

Nevertheless he tries his best, performing “weird slow motion ninja moves” and playing the cool dad role: “You know you can talk to me about anything,” he says. “Whatever parties you go to. Boys you meet. Drugs you take.”

Aftersun premiered at Cannes this year to an audience that included a tearful Moonlight director Barry Jenkins, and is already gaining praise for how emotionally riveting it is. Any of us who have ever spent time with a single dad know the boundless goofiness, cluelessness, and love they can all hold at once. (Need we revisit Ethan Hawke’s aloof single dad performance in Boyhood?) Combine aloof single dads with the 1990s and there is certainly a tender nerve being hit.

Though the film is not autobiographical, Wells mined her own relationship with her father to write the script. “The original idea was a young father with his daughter on holiday,” she told Deadline. “That was definitely always the core of it. I think it was inspired by just flipping through old family photographs, and it coincided with the point at which I was thinking about what my first feature might be."

As if Mescal needed another film that makes him look irresistibly aloof and handsome to a Sally Rooney and Phoebe Bridgers-obsessed fan base, Aftersun is actually the second concurrent A24 film Mescal is starring in. He also stars in God’s Creatures, a gloomy psychological drama set on the Ireland coast.

Aftersun is in theaters October 21. In the meantime, you can watch the full trailer here.