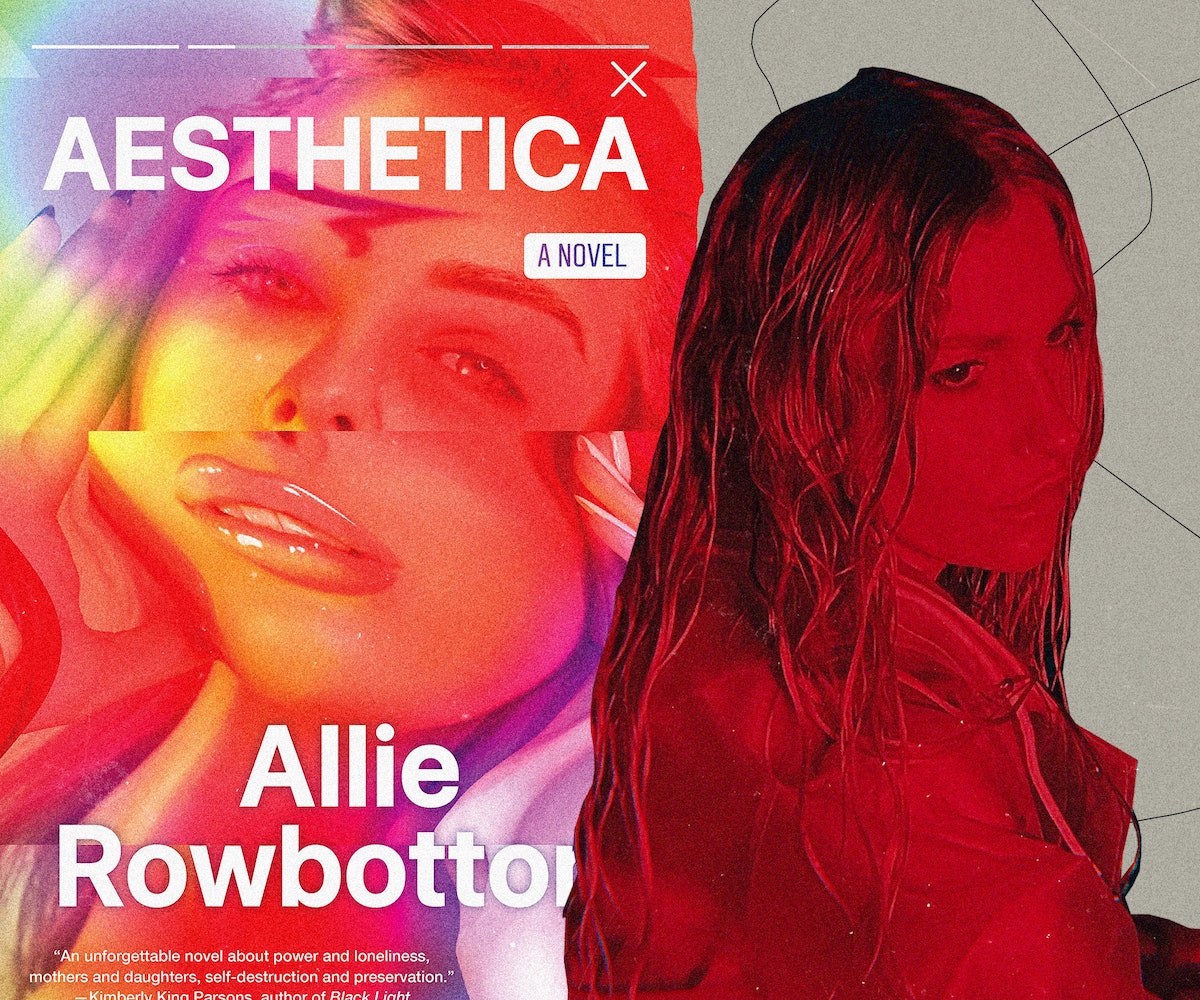 Allie Rowbottom’s novel Aesthetica takes place in worlds both physical and digital. The digital world is the one you, me and Rowbottom’s protagonist @annawrey opts into when she scrolls through her Instagram feed, spying on the weightlifters turned DTC leggings ambassadors, the kale salads and turmeric tonics of farm-to-table restaurants. In the physical world, the novel takes place in the hotel room of a castle-shaped, past-its-prime Los Angeles hotel and in the cramped quarters of the Texas home of a Lean Cuisine-single mom. It takes place in cramped apartments with wannabe actor roommates who turn their noses up at the word “influencer,” and in the private jet of a cannabis company with too much money and not enough morals, and in plastic surgery offices with crystal chandeliers.

But today, Rowbottom and I are in Central Park. It is peak foliage. We are looking at the lake, but I am thinking about where my phone is. In this case, I am considering whether or not it's close enough to record our conversation over the sound of children shuffling and buskers playing John Lennon songs. In Aesthetica, much like in life, Anna Wrey always knows where her phone is, which is one of the more inconsequential, but deeply astute things Rowbottom captures about what it’s like to be a person deeply on Instagram. “I am on my phone,” the book begins. “Of course I am.”

Aesthetica, an edgy, whip-smart page-turner that does in fact keep you off your phone, follows Anna Wrey, an instagram influencer who meets Jake, with a mouth that tastes like “Dentyne Ice, mezcal,” who becomes her manager and encourages her first boob job, beginning a years-long plastic surgery addiction. The novel toggles like a before and after photo between Wrey at 19 in 2017, building her Instagram following and taking care of her chronically ill ex-opioid addict single mother – and at 35 working the cosmetic counter at the “black and white store,” peddling anti-aging products. She’s back in LA to undergo an elective experimental surgery called “Aesthetica” to undo the procedures of the past 16 years as she debates whether or not to help a reporter take Jake down in a #MeToo story.

For the last decade, a lot of media has stumbled with depicting Instagram. You can bet there are TV execs gleefully patting themselves on the backs for how they depict characters in YA shows sending each other DMs with some emoji acumen. But no piece of media captures the obsessive claustrophobia of being on the platform in the way Rowbottom does.

“When the pictures posted I catapulted from 6,000 to 20,000 Instagram follows, earned $4,000 dollars. So much growth, so quickly,” Rowbottom writes. “Like the solution to an ailment I hadn't known I suffered, a power I’d known was possible, but hadn’t anticipated would be easy to claim.”

Hell, even Caroline Calloway calls it “the best book about influencers I've ever read.” At a release party for the book, Calloway made an appearance via video, where she sang Rowbottom’s praises and may or may not have read an excerpt from her forthcoming book Scammer. “I hate reading,” she said over video from Florida. “But I agreed to do this because I think that what Allie wrote is just so kind.”

“Ultimately, our core wants and our core ambition isn't really about social media. Even if it is, I want to get a hundred followers or a hundred thousand followers, it's like, what does that really mean? It's, ‘I want safety and I want approval and a kind of enduring love that I imagine that these people will give me.’ That's the real stuff.”

But the tracking of Wrey’s phone came later in the book, as did the addition of the models Wrey obsesses over on Instagram, as did the “Aesthetica” procedure itself, the latter of which Rowbottom added only in the last six months of writing the book. That’s because Aesthetica isn’t really an Instagram book. Sure, Instagram is the backdrop of everything like an unseen, omnipresent force, like a god you never asked for and resent having to acknowledge. What Aesthetica really is is a book about self-preservation, about the warring schools of feminism, the many, conflicting ways there are to Be A Woman, and about a mother and a daughter both in search of self and survival.

“Ultimately, our core wants and our core ambition isn't really about social media,” Rowbottom says. “Even if it is, I want to get a hundred followers or a hundred thousand followers, it's like, what does that really mean? It's, ‘I want safety and I want approval and a kind of enduring love that I imagine that these people will give me.’ That's the real stuff.”

Mothers and daughters and generational remaking of feminist trappings that both exalt and entrap us is well tread for Rowbottom, whose first book, the memoir Jell-O Girls contends with the relationship between her, her mother and her mother’s mother. Rowbottom says she largely wrote the memoir for her mother. Aesthetica, on the other hand, she wrote for herself.

“The mother-daughter relationship that's in this book is much more from my perspective as a young person trying to individuate and move forward and make a life with a mother who is chronically ill and just feeling so frustrated with her a lot of the time, and then later feeling super guilty for how frustrated and sort of terse I would be with her at times,” Rowbottom says. “I just wanted to nail that dynamic of loving your parent, feeling stifled by them, and then later feeling you wish you could go back and do it over again, and do it better, even though it was kind of not your job in the first place.”

Through Anna’s relationship with her mother Naureen, Rowbottom was able to explore different waves of feminism free and fail us through two generations, with Naureen parroting second-wave ideology and Anna doing the work of third/post-wave.

Wrey calls Naureen a “misogynist” for suggesting she’s on Instagram for the attention of men. When Naureen gets scammed by a naturopath, Wrey calls the woman a b*tch, to which Naureen scolds: “Women don’t call each other the B-word.” When reading about a surgery that changes the lids of natural Asian eyes, Wrey reads a testimonial from a woman who writes: “Day one and I’m already thrilled with my open, brighter expression, to which she asks: “What sort of woman would I be if I wasn’t happy for her?” It’s this last one that best captures the moral high ground involved in post-wave feminism: What kind of woman should I be? What am I supposed to think? What do I really think?

In one of the best sections of the book, Wrey gets Botox for the first time, and we see both the gentle prodding that gets her there, the communal feeling she experiences, and the ultimate high.

We both celebrate Anna’s agency and are concerned for her; we can understand how the communal feeling soothes the loneliness of a new city, how there is, in fact, something tender, almost motherly about the needle. In Aesthetica, surgery helps and hurts Wrey; surgery isn’t a cure-all nor does it destroy; surgery is a neutral.

Rowbottom knew plastic surgery, particularly the fact that Wrey gets a boob job, might be a tough sell for publishers. “I really couldn't think of any other books that were dealing with this subject matter,” she says. “I was like, why is nobody writing about this? It's so pervasive. It's such a big theme in our culture right now.”

Rowbottom has long had a fascination with Instagram accounts that show how ubiquitous celebrity plastic surgery is. She created the Instagram account @annawrey, which she uses to promote the book and repost accounts showing drastic photos of celebrities before and after surgery, often with quotes denying they’ve had work done.

“I just want to spread that around, because people don't actually know. It's so hard not to look at a picture of Kim Kardashian or whatever and just be like, ‘Wow, she really does look like that.’ Even if you know that there's a lot of editing that goes on, it's still hard to remember,” she says. “You don't have to say what you did, just say that somebody's doing something.”

Rowbottom considered having the “Aesthetica” procedure be one to reset Wrey’s face back to a childhood self, reverting a 35-year-olds face back to that of an eerily young person, but realized that wasn’t the message she wanted to send, nor would it be what Wrey actually wanted.

“What is it that she would want? It would just be to look natural,” Rowbottom says. “Sometimes the more sh*t you do is not for the better. And so how to take it away and remove those layers is a really interesting question.”

How Rowbottom writes about surgery is also influenced by her own experiences with it. The first time she got Botox, it was so easy; it was over in a couple of minutes and she saw the change instantly. But that excitement and agency was lost when some of her lip filler started to migrate, setting off a domino effect of dysmorphia: You end up losing that control that felt so good.

“I would get so anxious when I had that weird filler in, because I was like, how bad does this look? I could not see what was real anymore,” Rowbottom says. “And that really set me off, so I tried to put a lot of that angst into the book.”

The Instagram of today is different from 2017. Everyone and their mother is posting flat tummy tea #ads, but we are all recognizing that it is not that serious. As much as Aesthetica is a time capsule for Instagram now and the more clear-eyed hope of the Instagram of 2017, the novel will outlast the app’s Explore page. It marks our current moment of feminist ideals and how they fail us; it makes the many ways we’re sold healing and more importantly, the ways we find it.

“I do feel like Instagram will change or is already changing,” Rowbottom says. “That works for me, because I'm ready to go home and write my next book and not be online so much.”

Aesthetica is out November 22 from Penguin Random House.