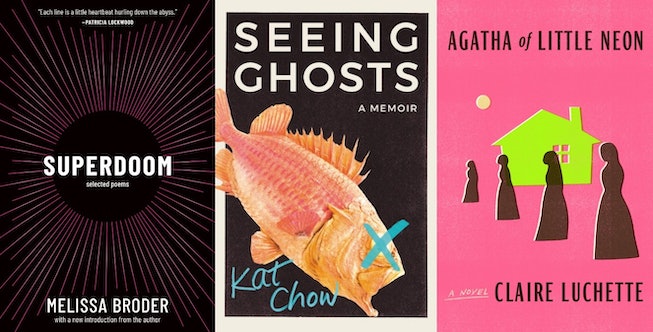 We’re in the thick of a hot, smoky summer. By this point you’ve either bulldozed through your list of must-read books or have a stack of ones you’ve half-read at the beach before tossing them aside to drink a lukewarm beer and talk about the latest Bennifer news with your friends. Either way — there’s a whole new crop of books coming out in August that are worthy of adding to your stack, even if you don’t get through them until it gets cold out.

From a poetry collection about celebrities misbehaving to a novel about how Millennials can’t afford apartments, here are the August book releases we’re excited to add to our summer reading list.

This short story collection tells nine darkly funny stories about the Cambodian-American experience, focusing on queer characters, all set in the smoggy Central Valley of California. The collection is a highly-anticipated debut from Anthony Veasna So, who tragically died of a drug overdose in December at the age of 28.

Made In China by Anna Qu - Catapult, August 3

In this debut memoir, a teenager is forced to work in a sweatshop in Queens and calls child services on her mother, in a decision that changes her entire life. (Does enough therapy exist?!) Twenty years later, she deals with the trauma of abandonment, estrangement, and examines the costs of immigration on her and her family.

In the genre of cultural Catholicism, Agatha and her three sister nuns have to move out of the Catholic parish they’ve lived in for nine years and move to a former mill town, where they take care of a neon-painted halfway house and Agatha becomes a math teacher in this deadpan novel about self-actualization, loss of faith, and the meanings of sisterhood.

Something New Under The Sun by Alexandra Kleeman - Hogarth, August 3

Alexandra Kleeman, author of the hilarious and devastating cult favorite dystopian novel You Too Can Have A Body Like Mine returns with her third book. This time, her work contends with climate change, the dark side of Hollywood, and what happens to a Los Angeles that isn’t destroyed, but has become “gradations of badness that felt more like home.” Timely!

It took debut novelist Nawaaz Ahmen a decade to write this book, after he left the computer science world to become a writer. (The range! I respect it!) The novel takes place in Obama-era California, where Seema, who was exiled by her father after coming out, now works as a consultant for Kamala Harris’ attorney general campaign. Now pregnant, she reconnects with her mother and devoutly religious sister, in this complex novel about three generations of a Muslim India family — all told from the point of view of her child at birth.

What To Miss When by Leigh Stein - Soft Skull Press, August 10

Leigh Stein — dubbed the poet laureate of The Bachelor — gave up alcohol for 30 days (an American hero!) during quarantine and wrote this collection of poems, about celebrities misbehaving, wellness influencers, disassociation, and other things we’ve come to know all too well over the last year and a half.

Combining Melissa Broder’s three cult favorite out-of-print poetry collections: When You Say One Thing but Mean Your Mother, Meat Heart, and Scarecrone, as well as selections from Last Sext, Superdoom is the perfect way to bite right into the profane, grotesque, and lush world of Broder’s words.

Sometimes I Trip On How Happy We Could Be by Nichole Perkins - Grand Central Publishing, August 17

Pre-order this book before it’s all over your Instagram feed. In this debut essay collection with a title I can’t stop thinking about, poet, podcast host, and former BuzzFeed writer Nichole Perkins examines the effect music, media, and the internet of the last 20 years has had on her as a souther Black woman — exploring everything Prince to her crush on Niles from Frasier (again, I respect the range) with wit and unflinching honesty.

A founding member of NPR’s Code Switch podcast, Kat Chow tackles the emotional fallout of the unexpected death of her mother to cancer. She writes about the grief that follows her extended family as they emigrate from China and Hong Kong to Cuba and America, and traces the story of her mother’s life in his emotional memoir. Buckle up.

Virginia Woolfe said a woman must have a room of one’s own, but Jo Hamya’s debut novel looks at what happens when that’s just economically not feasible. Set over the course of one year, a recent grad moves from her own apartment, to a stranger’s couch, and eventually back in with her parents in this Millennial novel about everything that’s trying to underpin our sense of security. Whew!

A New York PR firm employee has to figure out how to escape his work’s Slack after his consciousness is uploaded to the channel, in this extremely meta debut novel that feels like just the right amount of triggering after working from home for the last 17 months.

NEXT UP
Life
October 2022's Must-Read Book Releases
Life
Pamela Anderson To Release "Unfiltered" Memoir, 'Love, Pamela'
Life
Read An Exclusive Excerpt From I’ve Had To Think Up A Way To Survive: On Trauma, Persistence, and Dolly Parton
Life
Gabi Abrão's Notes On Shapeshifting Will Soothe Your Existential Woes