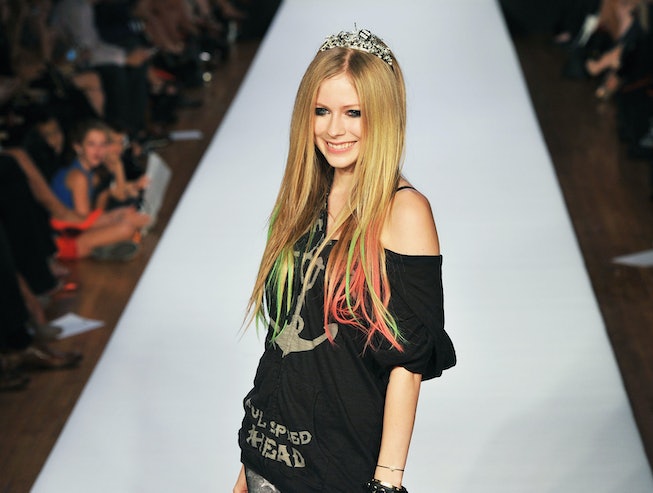 For most people, learning about the Avril Lavigne replacement conspiracy theory isn’t a “where were you when?” moment, like where were you the night of the 2016 election, or the day Brittany Murphy died (just me?). But I’ll never forget standing in the kitchen of my friend’s duplex on a winter night, when I first heard that Lavigne had died and was replaced by a doppelgänger named Melissa. It was 2015, a good 10 years after I’d stopped listening to her music regularly. I’d had a few drinks, but felt instantly sober. I noticed I suddenly had full body chills. I left my friends in the kitchen and sat alone on the couch while I read every word of the blog where the theory originated until someone took my phone away from me.

In case this conspiracy theory hasn’t taken your brain hostage, here’s the rundown: In 2011, a Brazilian blog post titled “Avril Esta Morta,” was published, a title that still makes my stomach drop. (Drama, but true!) The theory is that Lavigne died by suicide in 2003 after a deep depression stemming from the death of her grandfather. Lavigne was wildly successful at the time, so instead of announce her death, a doppelgänger named Melissa Vandella was hired, who is responsible for all of Lavigne’s work after Let Go. The blog cites evidence like the disappearance of moles and skin blemishes, changes in handwriting, a change in Avril’s nose and personal style (Avril wears Dickies; Melissa wears dresses) and a promotional photoshoot where Lavigne has the name “Melissa” written on her hand. Needless to say, Lavigne has denied this rumor many times.

I was surprised at how much the theory, which was so obviously false, disturbed me. But like so many other girls who grew up in the 2000s, Lavigne had been my hero. As a stubbornly pop-averse tomboy, I’d never gotten into Britney Spears or the Backstreet Boys. But when my best friend Raven played Let Go on repeat at her 10th birthday party, six months after the album was released, my world was quite literally rocked.

I remember dragging my stepmom into a Claire’s to buy me black jelly bracelets as “Sk8er boi” blasted on the tinny speakers. I remember defending the spelling of “Sk8er” and “boi” to my dad. (It’s high concept art, people!) For my own 10th birthday, Raven and I wore neckties and went to her concert and sat in the very last row as my dad begrudgingly sat through Simple Plan as the opener, but remarked he liked her cover of “Knocking on Heaven’s Door.” I was so obsessed with Let Go that I had to buy a replacement CD after mine was scratched beyond repair from listening to it on my Walkman on the way to school every day.

Lavigne’s power was her angst. I, too, felt sad and isolated, and I felt like she got my loneliness. Not because of her black eyeliner or her black Converse, but because of lyrics like: “She wants to go home/ But nobody's home/ That's where she lies/ Broken inside.” Some real pop-punk poetry right there! So when I learned about the conspiracy theory, I thought it was dumb, but I was disturbed. Lavigne’s sadness was what drew people to her, but was there a possibility that sadness had also swallowed her up? It wouldn’t have been shocking: Growing up in the Northwest, learning about the deaths of Elliot Smith and Kurt Cobain is basically required curriculum.

I should probably be clear that no part of me ever believed the conspiracy theory. The proof is flimsy, the writing style deluded. Its meme equivalent is the It’s Always Sunny in Philadelphia crazed mailroom conspiracy theory scene. I don’t recommend the blog for its literary merit, nor for its powers of persuasion. Most of it involves a graduate-level reading of lyrics mean to be intentionally vague as to apply to a broad swatch of listeners.

But I do think it missed its biggest form of proof: Avril’s misguided, offensive Harajuku era. “Hello Kitty” was released in 2014, three years after the blog’s post, but if fans were skeptical of Lavigne’s alleged changes before, “Hello Kitty” could have been enough to ignite a conspiracy theory of its own. In the video, she wears a skirt covered in fabric cupcakes, yells “Kawaii!” and “Hello Kitty!” at strange intervals and eats sushi while a dubstep beat drops.

This is where the motivation for the conspiracy theory starts to become more clear to me: I want to believe so badly that Lavigne would never have made “Hello Kitty.” Like the author of “Avril Esta Muerto,” and the people who perpetuated the conspiracy theory, I desperately want her to remain the person who would not make this song. People are uncomfortable with a celebrity changing without their permission, especially if a celebrity happens to be a young woman. The author of “Avril Esta Muerto” would rather believe the singer died rather than get a nose job, get highlights, or do anything besides be 19 years old.

“I've never seen a singer change her style of singing, writing, dressing and behaving as much as Avril Lavigne did, and everyone was talking about it at the time. Everyone was talking about the sudden and radical change in Avril's style and personality! It wasn't just the style or the way of dressing that changed. Her style is different, her musicality is different, the lyrics follow another line, in short, she is “someone else.”

But that’s the thing: She did become someone else. She changed, like people do. Employing the doppelgänger theory is taking the cliché of saying you like an artist’s “early stuff,” to its most absurd level. Lavigne’s original image is so precious to us, that rather than accept that she’s changed, the conspiracy theory conveniently kills her. That’s what’s dark about it; instead of believing Lavigne changed, we’d rather kill her.

On “...Ready For It?” the first track of Taylor Swift’s Reputation, the singer does the killing herself. “The old Taylor can’t come to the phone right now,” she says in a demented, sing-song lullaby cadence. “Why? Oh, ’cause she’s dead.” Swift knew she had to acknowledge the shift between her old self: the long, blonde curly hair Taylor strumming acoustic songs about Tim McGraw to the red lipstick-black sequin jumpsuit pop star Taylor.

It might be too easy of a jump to compare the doppelgänger theory to our treatment of other young, female stars, but it feels relevant to me. We desperately wanted to keep Hilary Duff as Lizzie McGuire, so much so that she felt pressured to keep her “good girl” image far longer than necessary. She’ll probably be asked about Lizzie in interviews forever. Meanwhile, we skewered Lindsay Lohan and Miley Cyrus for growing up. Lavigne was never caught with a bong or issued a DUI; she never did anything that changed her perception in such a drastic way. She just grew up and made some questionable artistic decisions, and that made people uncomfortable.

Luckily, the conspiracy theory hasn’t had any real consequences for Lavigne, except that she has to talk about it in interviews every few years, and her SEO results will be forever wrecked. But the effect of the theory is that “Melissa” has turned into shorthand for whenever Lavigne isn’t the person we so badly want her to be. If she gives a less than stellar performance or says something strange in an interview, we get to blame it on “Melissa,” like a warped Hannah Montana plot line. “Melissa” becomes shorthand for everything the singer has become that doesn’t match our conception of her. Melissa gives us a demented, unearned hope — that rather than accept that Lavigne has changed, we can always wonder if it’s even her at all.