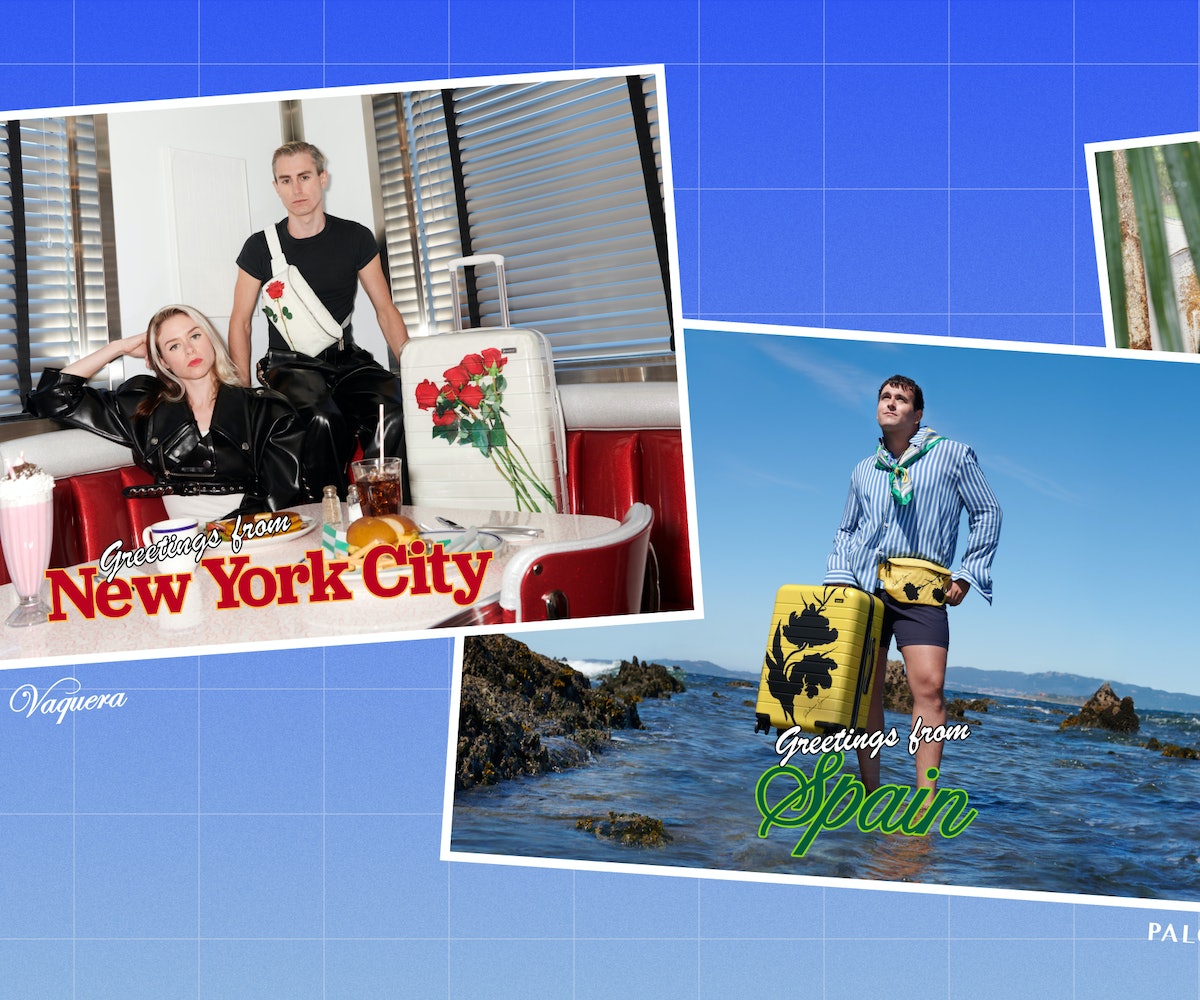 If you have to leave town for a wedding once every month (just me?), you might as well have a good suitcase. Away streamlined the luggage industry a handful of years ago to offer simple, functional luggage in peaceful neutrals to make even those of us who pack at the last possible moment look cool at the airport. Away’s luggage is famously understated, made to go with the chicest or most disheveled of traveling outfits — but now, they’re partnering with designers to make luggage distinct enough to avoid any possible moment of confusion at baggage claim, in bold, bright designs from three queer designers.

Away is partnering with fashion designers Palomo Spain, Vaquera, Ashish who will put their designs on Away’s Bigger Carry-On and the Sling Bag for limited edition collections launching on October 4.

In the spirit of jet-setting, each of the three designers chose a location that matches their essence. Alejandro Gómez Palomo of Palomo Spain created a black and yellow laminate floral print. “I wanted to incorporate the Spanish DNA of our brand, so we utilized our signature florals that have become one of the most recognizable symbols of our designs,” Palomo said in a press release.

“When I started the brand, I felt the need to make clothes that could be embellished with embroideries, feathers, and rich fabrics that weren’t traditionally seen in men’s collections,” continued Palomo. “I translated this same ethos to my collaboration with Away by creating a set of luggage that diverges from the idea of a simple monochromatic dark suitcase and instead is bright, colorful, optimistic, and chic.” If there are two words that will serve you while navigating the nightmare that is any airport terminal, it is “optimistic” and “chic.”

Patric DiCaprio, one half of New York City-based Vaquera, gives way to whimsy and romance with his design, which includes photo-realistic roses printed on nylon to make it look like there’s a bouquet in an empty suitcase. “We like that our bags will stand out in baggage claim — a place where there is often so much uniformity and homogeneity,” DiCaprio said in a press release. “We wanted to make something that could also be a conversation starter at the airport — who knows who you could meet!” Romance? In a post-9/11 airport? Beautiful!

The third design from Ashish Gupta of Ashish features a crayon-like graffiti-esque scribbles. “I love when people customize their suitcases so they no longer look pristine,” said Gupta of the collaboration. “I really like a good scribble and I wanted to bring that unrestricted creative mentality into my collection.”

This marks Away’s second foray into designer collaborations; last year the brand worked with New York City-based designers Sandy Liang, Tia Adeola, and Ji Won Choi. The Limited Edition products in Away’s Designer Collection range from $155 to $295 and will be available exclusively on awaytravel.com, as well as in Away’s 13 retail locations throughout the US, Canada, and UK, beginning October 4. Interested parties can sign up for notifications to snag their dream luggage as soon as it drops.

NEXT UP
Ask A Witch
Ask A Witch: How To Survive The Holidays With Hoodoo Magic
Culture
The White Lotus Will Return For A Third Season
Culture
Gucci’s Alessandro Michele Era Is Officially Over
Culture
Lindsay Lohan’s New Style Era Is Sweet Redemption