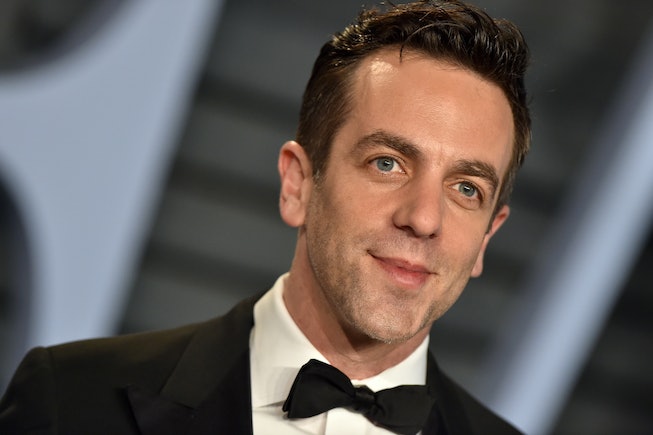 B.J. Novak’s face is everywhere, from a bottle of Calvin Klein Encounter perfume in Sweden, to a package of face paint in Uruguay to electric razors in China to knee-length ponchos in Europe — he just never knew it was happening. The actor posted a series of photos on Instagram earlier this week showing the bizarre and unconnected products which feature a stock photo of his face, complete with tousled hair and some stubble.

“Years ago, someone mistakenly put an image of me on a public domain site, and now apparently I am on products all around the world,” he wrote on his Instagram stories on October 26. “But I am too amused to do anything about it.”

As reported by the New York Times, a stock image of the actor has been in the public domain for years, making it eligible to be used to sling random products across the world without any compensations or notification for Novak. It’s unknown who took the photo. (If it’s you, please let us know!) The paper talked to some legal experts who said he could technically sue the companies or send a cease-and-desist order, but who cares?

To be fair, I kind of get why generic product execs would select Novak’s face while browsing Creative Commons. There’s something familiar and comforting about it; it has sort of an everyman quality. He’s got gentle eyes and a little smile that convey an unintimidating easiness — and if you didn’t know him by his character Ryan Howard on The Office, he could very easily just be some guy.

As noted by the New York Times, Novak has been aware of this widespread use of his face since at least 2014, where he posted a photo on Instagram of his face on boxes of cologne, with the caption, “I am #blessed to announce the launch of my fragrance, available now in a Swedish department store.”

The stock photo model to actor pipeline is real. Actors need to get paid, and shooting stock photos are easy ways to make some cash. The actor Simu Lu of Marvel’s Shang-Chi and the Legend of the Ten Rings posted an array of ads featuring stock photos of him that he was paid $100 to shoot in 2014. What can we say? Nothing is sacred, especially on the internet.