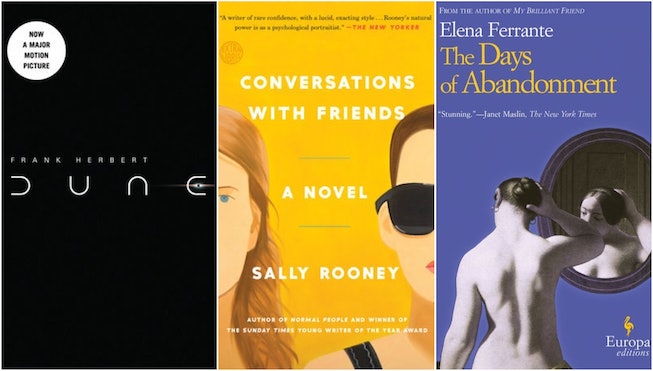 It feels like the world is riper than ever for book adaptations, especially thanks to the rise of celebrity bibliophiles like Kaia Gerber and Reese Witherspoon, the latter being the queen of recommending books through her book club, and then adapting (and starring in!) them for the screen — such as Big Little Lies, Wild, and Little Fires Everywhere.

Get a jump on reading the books that are going to suddenly hit the best seller’s list in the next year or so when their screen adaptation are released — with stories ranging from a look at the Vietnam War starring Pete Davidson, a novel about divorce starring Adam Driver, and a murder mystery that might star Armie Hammer (TBD!)

Conversations With Friends by Sally Rooney

After the 2020 Hulu adaptation of Rooney’s light-BDSM novel Normal People got everyone talking about Ireland and full frontal, the world might be ready for the next Sally Rooney adaptation. This time, it’s Conversations With Friends, her debut novel, which is about two couples navigating relationships in Northern Ireland, starring Alison Oliver, Sasha Lane, and Jemima Kirke.

The Lost Daughter by Elena Ferrante

Lots of good adaptation news for fans of absolutely devastating-in-the-best-way Italian novels: Maggie Gyllenhaal is directing the adaptation of the mysterious Italian author Elena Ferrante’s novel The Lost Daughter, a psychological horror novel about a mother and daughter, in which Olivia Colman and Paul Mescal will star. (In the case of Ferrante, do not judge her books by their cover designs.)

Days of Abandonment by Elena Ferrante

And in other Ferrante news: Natalie Portman will star in and executive-produce the film adaption of the novel The Days of Abandonment for HBO Films. The novel, which is Ferrante’s first, is about a woman’s psychological collapse after the dissolution of her marriage. Devastating and salacious!

The Power of the Dog by Thomas Savage

This film adaption based on the 1967 novel of the same same is about two Montana ranchers, which means reviews will likely include the phrase “the American West.” The film stars underrated acting queen Kirsten Dunst, along with Benedict Cumberbatch, and Jesse Plemons.

Death on the Nile by Agatha Christie

This thrilling Agatha Christie murder mystery that takes place on a boat on the Nile River stars an absolutely wild cast that includes Annette Bening, Russell Brand, Gal Gadot, and, reportedly Armie Hammer. (Although we’ll see if they keep Hammer in the film?)

The release of this highly-anticipated adaptation of every college sophomore’s favorite novel was pushed back because of the pandemic, but that’s fine because Timothée Chalamet and Zendaya definitely deserve a big screen! It will now be released in theaters and on HBO Max in October, but in the meantime you can skip the David Lynch version for Jodorowsky's Dune and see just how intensely the book shaped science-fiction as we know it.

This biographical drama is based on the 700-plus-page 2000 novel about Marilyn Monroe, which The New Yorker called the book “the definitive study of American celebrity.” Monroe will be played by rising superstar Ana de Armas in the upcoming Netflix film, but you can watch Michelle Williams’ excellent performance in My Week With Marilyn while you wait.

Where The Crawdads Sing by Delia Owens

Speaking of Witherspoon — the actor will produce the adaptation of this wildly hyped, and also controversial, novel about an orphaned girl growing up in North Carolina marshland and half courthouse crime drama. Daisy Edgar-Jones will star in the adaptation, set to release in 2022.

The Things They Carried by Tim O’Brien

You probably read this collection of short stories in high school, which traces the lives of several soldiers during and in the aftermath of the Vietnam War. The adaptation stars Tom Hardy and our goofy fave Pete Davidson and Euphoria’s Angus Cloud.

Noah Baumbach’s latest film will unsurprisingly star Adam Driver and Greta Gerwig, in the adaptation of this 1985 postmodern novel about — what else?— divorced families!