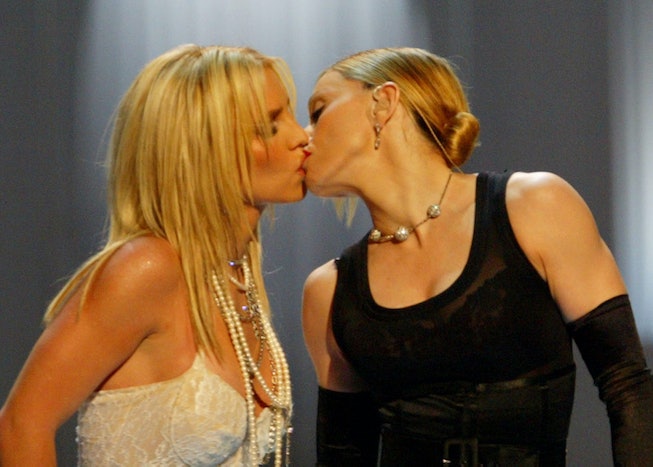 The ever-growing NFT market isn’t just getting more bizarre every day — it’s also its own kind of dark digital time capsule, reminding us of major pop culture moments over the last two decades only when the people who helped capture these moments decide its time to cash in. Today, that moment is the iconic Britney Spears and Madonna onstage kiss at the 2003 VMAs. According to TMZ, Los Angeles rock photographer John Shearer is auctioning off his photo of the iconic kiss on the NFT marketplace, Cryptograph, where he’ll undoubtedly make a ton of money off things you can’t hold in your hand: a .jpeg file and 2000s nostalgia.

The iconic kiss is memorialized in many a “best of the decade” list and was huge for so many reasons. This was the Bush era, and a post-Justin Timberlake ripping off Janet Jackson’s shirt during her Superbowl performance era, when the FCC was cracking down on MTV for airing videos like Blink 182’s “Miss You” where two women kissed — so much so that they had to air a version that didn’t include it.

If you don’t remember the details surrounding the moment, let’s take a minute to revisit: Britney Spears, Christina Aguilera, and Madonna (the holy trinity of the year 2003) performed “Like A Virgin” and “Hollywood,” with Britney and Christina dressed as the semi-virginal brides to Madonna’s black catsuit groom. At the end of the performance, Britney and Madonna kissed, and Christina and Madonna actually also kissed, but the Britney kiss has gone down in history, as has Justin Timberlake’s reaction to the kiss. Oh, and Missy Elliot closed out the performance with “Work It.” Insane.

The moment is well summed up by Daisy Jones for Vice: “It was a performance so specific to a particular place and time, that when you see all four artists together on one stage, it's like you can taste the discontinued Pepsi Blue, you can feel the cargo pants you once wore, and you can hear the Budweiser ‘Wassup’ advert echoing throughout your cranium. This was 2003, and this was iconic.”

You can watch this pivotal piece of pop culture without owning it, below.

The auction starts October 7 and will last 72 hours. A portion of the proceeds will be donated to GLAAD.