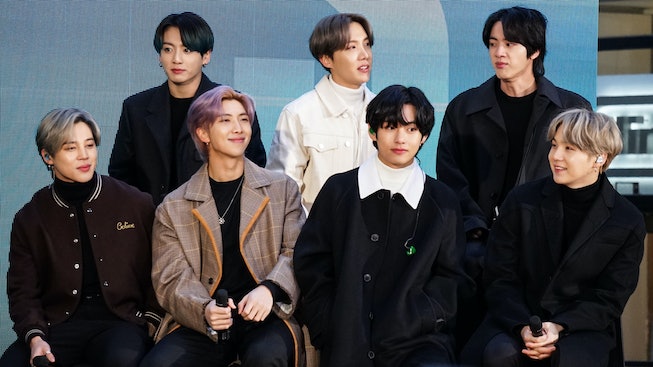 In their first appearance on BBC Radio 1’s Live Lounge, BTS performed a cover of Puff Daddy, Faith Evans, and 112’2 “I’ll Be Missing You,” with some luminous, goosebump-inducing harmonies and new verses in Korean.

"This right here goes out to everyone that has lost someone/ That they truly love," RM rapped before starting in on the opening verse.

Released in 1997, the track is off the Notorious B.I.G. tribute album No Way Out and famously interpolates the Police’s 1983 earworm song “Every Breath You Take.” BTS’ cover of “I’ll Be Missing You,” joins a growing list of other songs the band has famously covered, including Coldplay’s “Fix You,” and Jimin and Jungkook’s cover of Charlie Puth’s “We Don’t Talk Anymore.”

BTS is having a wildly successful summer, with their song “Butter” just having hit eight weeks in the No. 1 spot on the Billboard chart, tying Olivia Rodrigo’s “Driver’s License” for the longest time a song has charted at No. 1 in 2021. It was briefly replaced by “Permission to Dance,” making BTS the first musicians to replace themselves at No. 1, and then do so again the following week. If all of that isn’t enough — their single “Dynamite” surpassed one billion streams on Spotify last week.

You can watch their performances here: