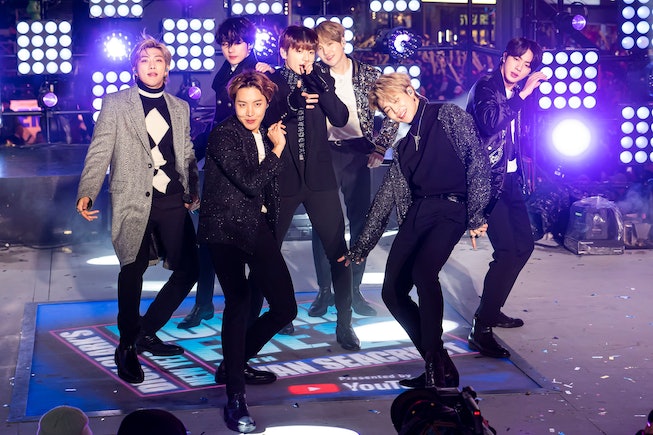 In the summer of 2020, BTS released the criminally catchy “Dynamite,” its first English song, which immediately skyrocketed to No. 1. Soon after they released the English sones “Butter” and “Permission to Dance,” which also reached No. 1. Despite having to cancel a world stadium tour because of obvious reasons, everything seemed great for the group: The songs marked the first time songs by an all-Korean group hit the top 10 of Billboard’s Mainstream Top 40 Airplay. Now, members of BTS share that not everyone was on board with singing in English, despite Shin Young-Jae, president of BTS’s label Big Hit Music saying otherwise.

“I think it’s a testament to the band’s strengths, the way they can come to a friendly resolution and be mindful of the company’s needs,” he told Billboard. Every time an exec is referring to the “business” part of the music business, you can bet there’s some artistic liberties being given up.

BTS member RM disagreed with Shin’s claims: “There was no alternative,” he told Billboard. And BTS member Jin told the magazine that singing in English felt unnatural. “The English I learned in class was so different from the English in the song,” he said. “I had to erase everything in my head first.”

Releasing songs in English wasn’t ever part of BTS’ plan. In 2019, the group told Entertainment Weekly, “If we sing suddenly in full English, and change all these other things, then that’s not BTS.” Nevertheless, they cashed in and recorded those three megahits — it appears at the pressure of the management company, a saga about capitalist and artist interests that’s all too familiar. (Just watch any episode of VH1’s Behind The Music.)

In the Billboard interview, RM went on to say that he thinks BTS needs to maintain its “outlier position” and continue to make music predominantly in Korean. “I don’t think we could ever be part of the mainstream in the U.S., and I don’t want that either,” he said in the interview. “Our ultimate goal is to do a massive stadium tour there. That’s it.”

There’s no word yet on whether future songs will be in English — but Jin talked about the burn- it-all-down energy the group felt in 2018, when they renewed their contract with the company that owns Big Hit Music. “We ended up telling each other that because we worked so hard up to that point, let’s see how far we can go,” he told Billboard. “I don’t know if I should say this, but [we said], ‘Screw the agency, screw everything. Let’s just put our faith in the members and the fans and start again.’”