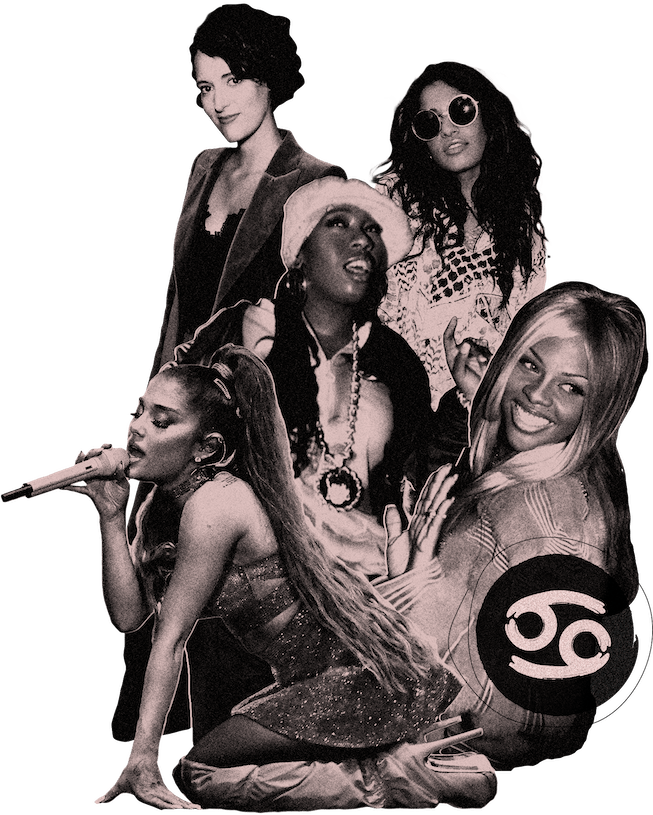 The gag of the last century went down in 1989, when, in a pediatric AIDS unit at a hospital in Harlem, Princess Diana reached down and hugged a 7 year-old patient. With one act of compassion, the public discourse around AIDS, and false fears of transmission through close contact, were changed forever. This is the work of a Cancer.

The first three signs of the Zodiac — Aries, Taurus, and Gemini — awaken the calls of the body as the sensual world blooms after a long winter. But Cancer marks the arrival of the soul. Gemini season launches you out into a manic shuffle of experiences; Cancer collects those experiences and makes them into something more: a history, an identity, a story. This is the domain of the moon, Cancer’s ruler, which, through its phases of birth, death, and regeneration, enacts a cyclical saga, imparting lessons for the next monthly ragnarok.

The moon embodies the divine mother archetype, and Cancer’s base of operations are the mammary glands. The essential directive for any Cancer is to give. On the base level, a Cancer must establish a sense of safety, nourishment, and security for herself and for her loved ones. The “mother’s milk” of Cancer is belonging, the context of DNA passed down to make every new arrival know that they have come home. Before Leo can claim its solar throne, embodying the wisdom it has gained, Cancer constructs the castle, and chooses with whom to populate it. Without the family of Cancer, Leo would be an ego with no ethos, a star with no constellation. Every soul needs a tribe.

This battle for survival, for better or worse, is Cancer’s bread and butter. When is the next meal? Where will I live? Who is going to love me?

The close-knit clan of Cancer is endangered in the world of its diametric opposite, Capricorn, sign of the state and governance. The battle of the raw feminine, thrust into a Mark Wahlberg masculinity terror panopticon, has brought us some of our greatest Cancer paragons: Princess Diana fighting to assert kindness over the rigidity of the Crown; Simone Veil affirming her love of God while in exile from the Catholic hierarchy. In her comedy, Kate Berlant, in the guise of a late-capitalist inspirational speaker, proclaims that after being “forced into an economy in which you have to pay for your own subjectivity,” women deserve to steal cosmetics from Sephora. The clash, or dance, with the devil (Capricorn’s traditional avatar) makes for the grand guignol of Penny Dreadful, as Eva Green fights to save herself from damnation.

This battle for survival, for better or worse, is Cancer’s bread and butter. When is the next meal? Where will I live? Who is going to love me? At their core, every Cancer is a little bit Fleabag: tapped into a higher emotional spectrum and unable to secure a feeling of safety, prone to spinning out, dissociating, and not leaving well enough alone. “I think you know how to love better than any of us,” Fleabag’s father tells her. “That’s why you find it all so painful.” Enter Ariana Grande, whose songs “Needy” and “Greedy” sum up the endless agony. Though she wishes to be the heroine of “Bloodline,” she can’t live without meeting the core Cancerian demands: “Let Me Love You” and “Love Me Harder.” What happens when they go unmet? Grande’s heart remains ever-broken, gushing the blood of life for the rest of us to drink, awakening us from the grave.

Not every Cancer is willing to live in liminal pain — just ask some of its male all-stars. Under the threat of contemporary masculinity, some Cancers cleave to the crab’s baser tendencies: clawing its way to success and never letting go, and hiding its feelings in an impenetrable shell. The need for security with no mode of advanced emotional expression becomes a totally selfish tenacity, embodied through 50 Cent’s Get Rich or Die Trying ethos. The stories Cancer tells, meant to be the lifeblood of its people, are warped into self-serving hero narratives, as George W. Bush, in the wake of 9/11, sold propaganda about an America that never was, and a war that was never worth fighting. Fortunately, Lana Del Rey has come to tell the story of a new America, one just as fictional but based on a pastiche of love. The mother has returned, and she’s on the back of a Harley Davidson.

Are Cancers destined for self-sacrifice? Actually, that’s the destiny of Pisces, the sign of Jesus Christ himself. For Cancer, the job description is more Jewish mother than martyr. Powered by the sun, Leo sits back in its eternal splendor, wanting nothing from nobody. But the moon cannot generate its own heat — only absorb and reflect the light of the sun. There is no independent expression — everything is enmeshed and received — which can tint its nourishment with bitterness, neediness, or passive aggression. Look at how much I’ve given for you.

Even when the gifts are their purest, they can still make the individual recipient feel smothered. Playing mother to a weary nation, Marianne Williamson has gone into attack mode against the corporatist-political establishment, deliberately taking a hit in her presidential run for the sake of imbuing the race with the compassion of her sign. Williamson’s interview podcast perfectly suits the frustration of a Cancer: She has so much to say that she often subsumes her guests entirely. As the vessel of A Return to Love, she has too much to give.

But for those who have been underfed, who don’t know where they belong, or how they fit into the larger monomyth of now, this is the food of life. “Let me give you the walk through, show you what you do and you don’t do,” says Lil’ Kim, at the start of “Lighters Up,” her anthem to her neighborhood of origin, and the people who populate it. The song begins in her sub-borough and expands to hoods all over the country, creating a gestalt American backstreet and a new unity, with Kim as the guide.

This is M.I.A.’s “World Town,” where future children party in the ruins of colonialism, capitalism, and racism. If the crab carries its home on its back, M.I.A. carries the stories of those without one — her Sri Lankan family, the culture she cultivated as a brown girl in South London, and the conditions of refugees, “terrorists,” exiles, and hustlers forever without a place. Though she populates her music with sounds from around the world, she is telling one story. M.I.A. follows fellow Cancer Missy Elliot, who creates music video dream worlds, where entire subcultural lexicons, styles, and movements are forever immortalized.

“Have I outgrown this old town?” Roisin Murphy asks, in “Murphy’s Law.” Never, so long as she tells the story of the Cancerian soul-shtetl, where we learned to love, and to lose. This is the living room of Wendy Williams, and the bedroom of Phoebe Waller-Bridge, where we’ll always feel safe, where we can always come back to remember who we are. This is home.

This article was originally published on June 21, 2021