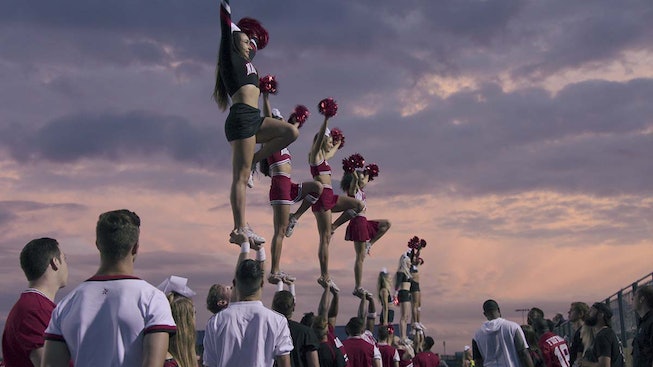 What if I told you that Cheer, the Emmy-winning Netflix docuseries about a Texas college competitive cheerleading team that everyone was talking about until Tiger King came out — is a relic of pre-lockdown life? The show premiered in January 2020 and had Squid Game-level hype rivaled only by the insanity of a man with tigers as pets, which all the round-off back-handsprings in the world can’t compete with. But in the two years since the show premiered, it’s catapulted its stars — particularly coach Monica Aldama and team members Lexi Brumback, La’Darius Marshall, Morgan Simianer, Jerry Harris and Gabi Butler — to fame that went beyond the viral TV trend cycle. Now, the show is set for its Season 2 premiere next month and from the trailer, it looks like the season deals largely with the effects of that fame on the town and the team.

“When we arrived at Navarro to film Season 2, it was impossible to ignore their fame,” says director Greg Whiteley. “It was such a big part of their lives that it would have been dishonest not to account for it when filming.” But the trailer hits at so many storylines it’s hard to tell what the arc of the show is going to be.

“We don’t see each other as celebrities,” coach Monica says in the trailer, hinting at how the lives of so many on the team has changed drastically. We also see police raiding the house of Harris, who faced a 15-year sentence for multiple federal sexual misconduct charges, including soliciting child pornography. We also get some of what made the initial season so popular — how the team functions as a place of refuge for the precarious home lives of a lot of its team members. “I don’t know where I’m sleeping tonight, but I do know that at 6 o’clock, I’m going to cheerleading practice,” one cheerleader says.

But the main plot appears to revolve around a competing team: Trinity Valley, who as a hotshot coach who says, “My mindset was how it is in football: I’m here to destroy you.” They also have a cheerleader who’s described as “the Simone Biles of cheerleading,” as she’s seen doing back handspring layouts. Competition! Drama! Stakes!

The second season started filming in January 2020, but was shut down for safety concerns, as was the 2020 NCAA National Championship. Filming started up again in September 2020. And we have more Cheer to look forward to this year: The show was also expanded from Season 1’s six episodes to nine episodes in Season 2.

Cheer premieres January 12. In the meantime, watch the full trailer, below.