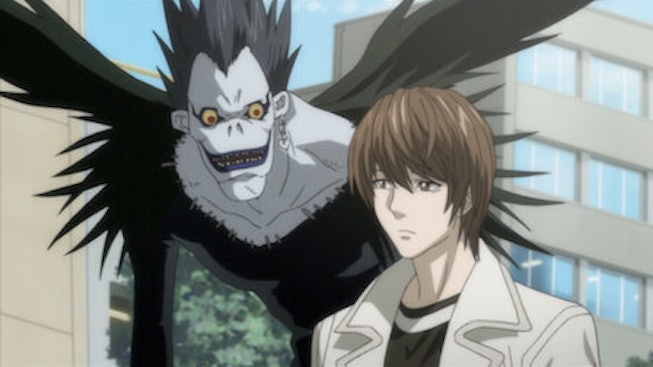 Fresh off the success of the insanely popular Stranger Things which has resurrected Kate Bush to her rightful place in pop culture, the Duffer Brothers at back at work adapting a live-action Death Note series from the popular manga and anime franchise.

Death Note is about a high school student who discovers a supernatural notebook that grants its user the ability to kill anyone whose name they write down, and has gained a cult following for its disturbing look at just how quickly one can descend into pure, unadulterated evil. It’s got a chokehold on pop culture, which has seen many an adaptation of the story.

We don’t yet know a lot about the series, which was reported by Deadline, but it is part of a string of announcements from Matt and Ross Duffer, who also announced they have formed Upside Down Pictures, a new production company to develop film and TV projects as part of an overall deal with Netflix. The company will produce the live-action Death Note series.

The Duffers have some sweet aspirations for their company. They want to tell “stories that take place at that beautiful crossroads where the ordinary meets the extraordinary, where big spectacle co-exists with intimate character work, where heart wins out over cynicism,” they said in a statement. Cute! Not sure how much a deeply dark anime about an unlikely serial killer will do that but we’re looking forward to their take anyway.

Here’s everything else we know so far about Death Note.

Death Note has been around for nearly 20 years

Originally published in 2003, Death Note was a manga written by Tsugumi Ohba and illustrated by Takeshi Obata. That spawned a 2006 anime series, a 2006 live-action film, a 2015 live-action series, and a 2017 American live action film adaptation.

Netflix is one of the many Death Note devotees. The platform produced a failure of a live-action Death Note film in 2017 with a randomly stacked cast that included Nat Wolff, Lakeith Stanfield, Margaret Qualley, Shea Whigham, Paul Nakauchi, Jason Liles, and Twitter’s latest obsession, Willem Dafoe. There was also a 2006 live action Japanese film.

The Duffers may have a different approach to the story

According to Deadline, the Duffers version will be “an entirely new take” on the story. We’re guessing it might become a little more PG? Netflix famously and shamelessly will back anything that will get them those streams.