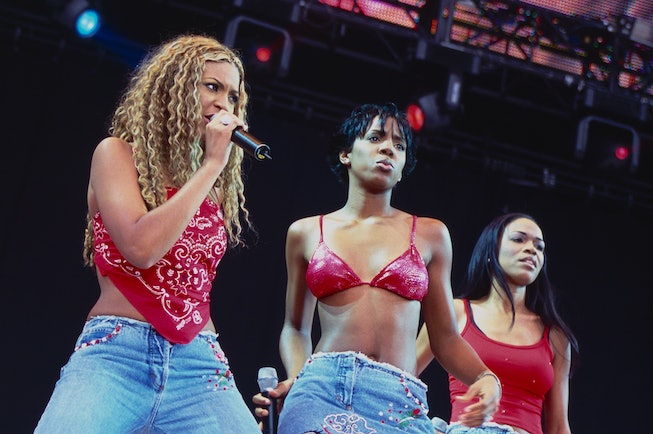 Everything good from the 2000s is back: emo, Ed Hardy and body glitter. It’s only right that Destiny’s Child come back too, after the iconic group’s 2006 split. At least, that’s what hopeful fans are speculating may happen, after Destiny’s Child simply changed their header image on Facebook and Twitter to a new logo, prompting fans to lose their minds over a possible reunion.

Destiny’s Child was trending on Twitter yesterday, with fans speculating about reissues of old music, a tour or even new music. (We’re not worthy!) There’s nothing besides the header image change that would indicate any new music, but that didn’t stop fans from absolutely freaking out, because we all need something to hope for right now. (Fingers crossed for another stimmy check in case we do need to shell out big bucks for a reunion tour!)

Destiny’s child last formally reunited at Coachella in 2016 where they performed a medley of “Lose My Breath,” “Say My Name,” and “Soldier.” But they were also together in May, when Kelly Rowland posted a video to Twitter of the group talking to support the release of Rowland’s new book Checking In: How Getting Real about Depression Saved My Life – And Can Save Yours.

We do know there’s going to be new music from at least one Destiny’s Child member and I bet you can guess who it is! Beyonce recently confirmed in an interview with Harper’s that she is making new music — no doubt the biggest day of the year for the BeyHive, who has been eagerly awaiting new solo tunes (that have nothing to do with The Lion King) since Lemonade — which at this point was two presidents ago.

“I’ve been in the studio for a year and a half. Sometimes it takes a year for me to personally search through thousands of sounds to find just the right kick or snare. One chorus can have up to 200 stacked harmonies,” she said in the interview. “Still, there’s nothing like the amount of love, passion, and healing that I feel in the recording studio. After 31 years, it feels just as exciting as it did when I was nine years old.”

Of course, Destiny’s Child hasn’t weighed in on any of the rumors, but in the meantime, you can revisit the group’s best Y2K fashion moments, which they better bring back if there is a reunion.