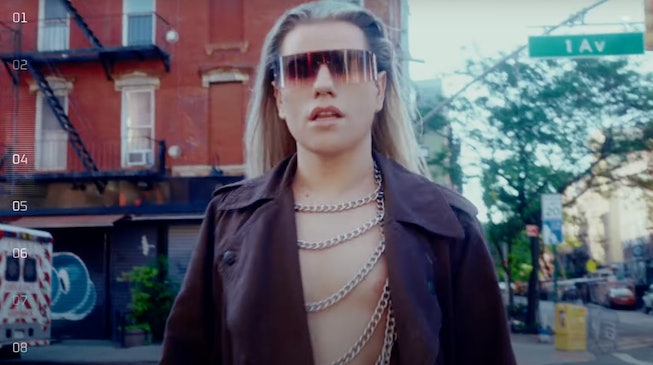 Living in New York can feels like a perpetual video game — descending flights of subway station stairs, dodging small animal carcasses, and facing new and unprecedented bosses like raising rents or yourself in a mirror on a 90 degree day.

In the music video for Manhattan-based musician and DJ Dexter Driscoll’s latest single “Pretty Boy,” a “very stupid banger about identity in isolation,” New York is a video game you might be destined to lose, but one in which you’ll learn something about yourself along the way. Looking hot along the way is crucial.

The video, directed by Emmanuel Nuñez, welcomes the viewer into the world of “Pretty Boy” with a gaming countdown, which reveals Driscoll’s POV, as we see them don wraparound glasses. Clad in a plaid Catholic schoolgirl skirt and a ripped black crop top that later gives way to a slinky silver body chain, we see Driscoll dance along the West Side Highway and in front of the Astor Place Cube, shaking Rapunzel-esque golden locks with headbang abandon, while singing, “I'm a pretty boy and I dance and I sing/ Show a little skin, live a lot of dreams.”

“The Pretty Boy video gives the option to share in the glory of my isolation and identity in New York City, my home and my favorite place on Earth,” Driscoll says to NYLON. “Follow the rules though. You may not know what they are yet but the only thing you can't escape are consequences.”

Driscoll wrote the song, which is, in fact, a banger, with as much a nod to bright early 2000s indie rock as it is to bassy club beats, during quarantine, a period that felt “very natural.”

“My tendency to isolate and fantasize has always kept me separate and safe from the world around me. The bad and the good. So it was very jarring to see how the rest of the world experienced the near universal isolation of lockdown,” says Driscoll. “Once lockdown was lifted a man, at a gay bar asked me if I had grown my hair out to be more femme during the pandemic. I seethed. I did not. I was cruelly angry that my hermitage was reduced to the social permission of quarantine. I had earned it!”

It was during this time that the metaverse also started to become mainstream, a word that more than just Mark Zuckerberg and crypto fiends were throwing around, which made Driscoll think about the idea that anyone can be anyone they want, wherever they want.

“Desire and whim trumps birth and experience to at least some degree quicker than ever before,” Driscoll says. “Yet I still have earned my identity. ‘Pretty Boy’ is about that.”

Watch the video for “Pretty Boy,” below.

NEXT UP
Culture
Pretty Sick’s NYC Show Was A Raucous Party To Remember
Culture
Aly & AJ's "With Love From" Video Is A Postcard Of Melancholy
Culture
Spotify Wrapped Is The Only Social Media That Doesn’t Lie
Culture
Not One, But Two BTS Documentaries Are Coming