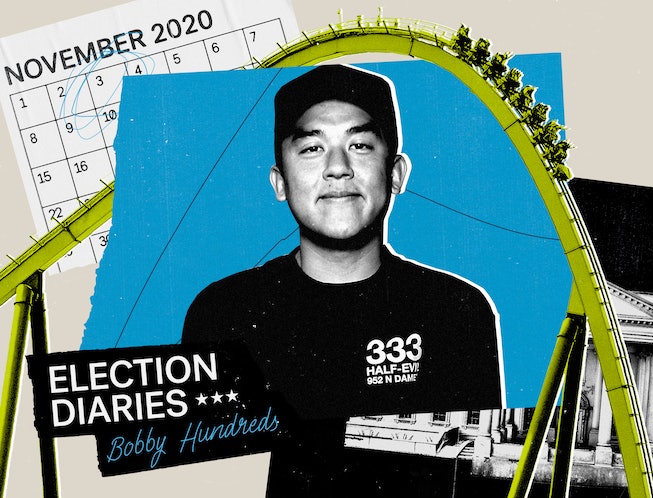 Welcome to NYLON's Election Diaries, a new series of political op-eds. Leading up to the 2020 presidential election, we're asking some of our favorite voices in music, fashion, and pop culture to write down their thoughts leading up to this monumental day, including their hopes, fears, and everything in between. Today, Bobby Hundreds, co-founder of The Hundreds and author of This Is Not a T-Shirt, shares his essay "In The Same Boat."

I was terrified of roller-coasters when I was a kid.

Yes, the pretzeled Six Flags variety with the dangling legs and corkscrew loops. I was most scared, however, of the Pirates of the Caribbean at Disneyland (which, can you even classify it as a roller-coaster?). The underground boat ride courses through a labyrinth of unpredictable drops in the dark. The muggy air, the grotesque animatronic characters… they all triggered a roiling dread. I was baffled by how much fun my brothers were having, alarmed by the passengers’ shrieks that signaled a confusing blend of fear and thrill. I was isolated in a private hell down in those churning tunnels, left for dead in an echo chamber of laughing skulls and misogynistic pirates.

As I got older, I realized that as horrifying as the experience was, I wasn’t alone in the journey. The awareness that I was sharing a fiberglass boat with tourists in Mickey Mouse ears assuaged my insecurity. If I plummeted over the falls into nothingness, so would they. If one of those red-hot cannons fired a steel ball into our raft, we’d collectively explode into a million pieces. On a positive note, there were enough of us to fend off the monsters and rescue each other from drowning. We were in this together — my family and the motley assortment of Disney-goers: Taiwanese newlyweds, grad night teens, a Mormon family of six from Michigan.

Most of us cultivate an awareness of others and shared social identity as we grow up. As kids, we are the center of our universe. Our consciousness only goes so far as our own nose. I used to lie awake in my childhood bed, wondering whether my life was a Truman Show of staged events and robots. What if this was all an experiment and I was the only sentient being? As I met more people and my empathy developed, I was relieved to disprove this theory. It was both harrowing and onerous to be the lone subject of a simulation. Life was more fun and fulfilling when shared. It was also impossible to succeed without asking for help. I found bravery and confidence in the company of others.

This year has played out like the climactic finale of a four-year roller-coaster.

This year has played out like the climactic finale of a four-year roller-coaster. There have been relentless twists and unanticipated dips and just when you think it’s over, the car is accelerating into an oncoming wall. We’re barreling toward The Most Important Election of Our Lifetime™ and closing our eyes, fingers crossed. In the raging quiet, it all feels very desolate and hopeless.

I’m scared if he wins; I’m scared if he loses. Not that we’ll have an answer in hand. The upsetting reality is that this won’t be an Election Day, but an Election Month (if not Months), as the results get tied up in the courts and media punditry and social media madness and violent flare-ups. Meanwhile, we’ll confirm what we were afraid to admit all along: That just as the pandemic won’t come to a screeching halt at 11:59 p.m. on New Year’s Eve, our sociopolitical existential crises don’t start and stop with presidential elections. Our problems were germinating long before a President Donald Trump (it’s still surreal to see those words together), and regardless of what happens in November, the nightmares will mutate and metastasize throughout a broken nation for years to come.

The blame game. We can wag our finger at social media for exploiting us and pitting Americans against each other in an ongoing digital civil war. I prefer to attribute our societal ills to extreme wealth inequality. If the top 1% of the country own half of the assets, of course we’re going to fight amongst ourselves. There’s an argument that a diseased government has eroded our trust in leadership. Or that without faith and moral guidance, we’ve not only lost something to believe in, but community. I mean, we’ve lost something to believe, period. Who knows what is real anymore? The news? Science? Who is telling us the truth? Brands and institutions have lost credibility, artists sell out, even our own sense of value is tethered to a scoring system that hinges on mysterious algorithms. Everything is mushy. As hell’s definition goes: Nothing is connecting with nothing.

Everything is mushy. As hell’s definition goes: Nothing is connecting with nothing.

I’m back in the Pirates of the Caribbean again, disembodied and floating in humid space. This time, however, I reach out and hold fast to my mother’s hand. I turn to my family, my next-door neighbors, and my friends at work. I switch my phone flashlight on and see the boat is as big as my neighborhood, my city. In here, I have my customs and culture, my commitments and relationships. It’s easy to be misled by the darkness, to be fooled into thinking that you are left behind. It’s an abominable lie. In this great, endless world, you are never alone. You’re bound to a mosaic of others.

No matter which side of the political fence you sit on, half a country stands with you. For every red hat, there’s a BLM sign. For every anti-vaxxer, there’s a pro-vaxxer. For every ballot box, the GOP has planted three illegitimate ones (sorry, too soon). Actually, I’d dare to say that the majority of us are politically homeless at this point, sickened by the in-fighting and corruption, disenchanted by the theatrics. We are united in being divided, and that’s a start towards reconciliation, isn’t it? COVID-19 came along at the worst time, really. Everyone burrowed deeper into their holes when we needed each other the most. Instead of retreating to our social media corners, we should be comforted by the presence of community. Take solace in the fact that in the dark, there are millions of others who empathize with your plight. It’s hard to see them right now, but they’re ideologically by your side and they’re searching for you. I’m one of them and I need us to be brave right now.

I can’t do this without you.

NEXT UP
Life
On Repeat: Vaquera’s Away Collaboration Is Brought To You By Britney Spears B-Sides
Life
Away’s Second Designer Collection Will Have You Traveling In Style
Fashion
The 13 Buzziest Moments from Paris Fashion Week
Fashion
The Latest Lingerie-Inspired Runway Trend Is Wearing Bras As Shirts