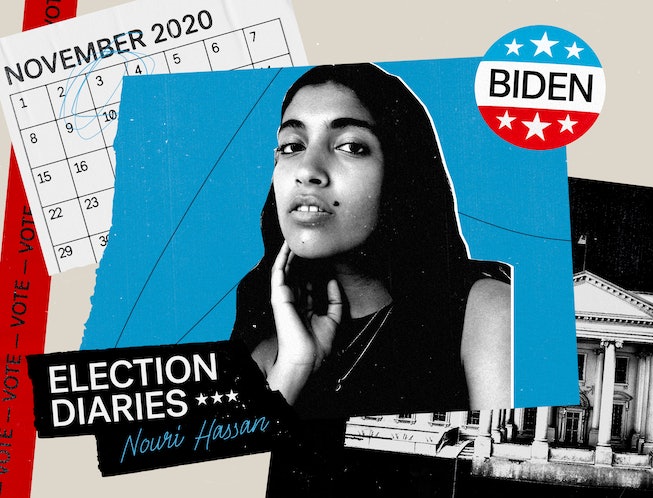 Welcome to NYLON's Election Diaries, a new series of political op-eds. Leading up to the 2020 Presidential Election, we're asking some of our favorite voices in music, fashion, and pop culture to write down their thoughts leading up to this monumental day, including their hopes, fears, and everything in-between. Up next, IMG model and XYNE Agency founder Nouri Hassan on exercising her right to vote for the first time.

"This is the first time I'll be voting, which is exciting. I'm 21, but I missed the cutoff when I turned 18 for the last election. I wish I could have voted in the previous election, but I think there is more riding on this one and I'm nervous. We're living in such a scary and unprecedented time, and with that, this election is very significant. There are so many issues that we're facing, and we're voting for a chance at redemption.

In response to COVID, we were extraordinarily unprepared and also the most affected country in the world. But aside from that, we're voting to dismantle systemic racism. We're voting for education reform, housing reform, women's reproductive rights, LGBTQ+ rights, fundamental human rights.

Everything has so much weight to it — whether we're talking about ending white supremacy, finding a miracle vaccine to end this pandemic once and for all, or even making plans to invest in clean energy, research, and innovation. The future is so bleak to me right now. I've been feeling hopeless, and I think a lot of [other] people are.

I'm voting for Biden. He isn't the end-all, be-all to solve the issues we're facing, but he has sensible aspirations for the country. He has plans for protecting communities of color, strategies for combating COVID, and making healthcare more accessible. He believes in clean energy and doesn't think that climate change is a hoax. It's a lot of things that seem like common sense. He's not the perfect candidate — I wanted Bernie, most of my friends wanted him, too. But it's anything but Trump, anything but him.

I am urging everyone I know to go out and vote. When it comes to my parents, my mom has always voted, and even though my dad is a citizen, he chooses not to vote. It bothers me that he, plus some friends of mine, think that their vote doesn't matter. With this mentality, we are losing out on so many people who could be contributing to the voter count. Regardless of where they're from, whoever they decide to vote for, their vote matters. We have the right, so we need to exercise it.

Also, even though New York is a Blue state, anything could happen at any time, especially now with mail-in ballots and the complete uncertainty around it. I'm going to vote in person though, I feel like that's the safest way to do it.

We need to get people excited to vote and make it fun: Go and cast your vote with friends so it won't feel like a chore. I think everybody's feeling pressured to vote (as they should), since all that we hear is, 'Vote, vote, vote,' but let's take it seriously. We need to vote like our life, and our rights depend on it, because they do."

As told to Maria Bobila.

Are you ready for Election Day? Start by registering to vote and making a plan for Nov. 3.

NEXT UP
Life
Away’s Second Designer Collection Will Have You Traveling In Style
Life
TikTok Toasts To Latinx Heritage Month & More Party Photos You Missed
Life
How To Dress For Your Birth Chart, According To An Astrologer
Life
All About The Age Of Aquarius