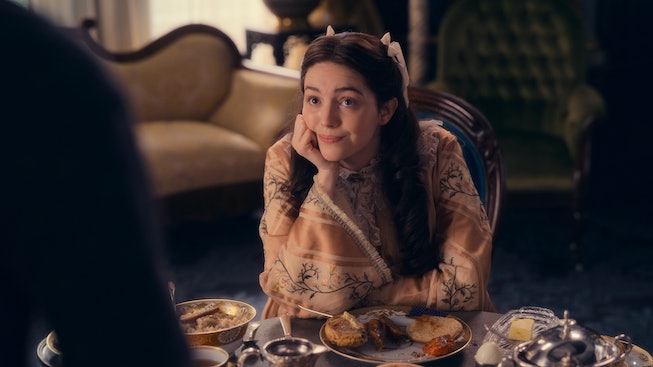 Ella Hunt is obsessed with the rule of three, she says. As the third and final season of Dickinson premieres, she’s getting ready to release Triptych, her debut EP containing three songs exploring the breakdown of a long-distance relationship, along with a video accompaniment.

For the last three years, the 23-year-old has starred alongside Hailee Steinfeld in the Apple original series about the reimagined life of Emily Dickinson. The show stylishly blends eras in a universe that gels traditional costumes with a modern soundtrack and contemporary dialogue and speech patterns to create a stylized, offbeat world that feels wholly original. Steinfeld’s Emily can be awkward, unlikeable at times, sentimental, self-righteous, strange, and sad. (In one episode, she’s referred to as “the original sad girl” to capitalize on our current Sad Girl Fall obsession.) Hunt plays Sue, who in real life was married to Emily Dickinson's brother but is said to have had an affair with Emily for years — and it’s the representation of their relationship that’s earned the show an LGBTQ+ cult following.

“The more I think about the show, the more I see it as a three-act play: the third and final act is the meatiest,” Hunt tells NYLON over the phone from New York City. “We go to the darkest places with the characters. We see them at their greatest highs too.”

Dickinson’s third season premieres November 5, but as one chapter ends, another begins: Triptych is going to be released later this year. Hunt has been acting professionally since she was a child and writing songs forever, she says, but her professional foray into music is more recent.

“I’m laughing at your tweet,” Hunt tells me, before reciting: “I’m not in his DMs, but I am on the Ultimate Guitar app, which is worse.” Hunt can relate: She says she’s been using an app called Guitar Tricks. “I’ve played the acoustic badly for a long time,” she says. “Recently I bought a really beautiful Telecaster electric guitar and have told myself I'm actually going to get good at it.” For someone who's had a successful acting career for the last decade, it’s funny to hear Hunt talk about being mediocre at guitar. Her approach to talking about music is less polished than when she talks about acting, which she’s done for most of her life.

“Music was my first love,” she says. “I’ve been so nervous about talking about music stuff. With acting I’ve done the junket so many times, but with music I’m just like, I don’t know how much of a script I want there to be,” she says.

It’s fitting that Hunt is pursuing this new chapter of music as the show ends. Dickinson is ultimately about boldly following your dreams and pursuing art against all odds; it’s about how when the world is falling apart (in Emily’s case, hostilities between the Union and the Confederacy), art can save us.

I know you have an EP coming out. Tell me about that and your journey to music from acting.

I’m so excited about this EP. Having been writing music for a long time all through my childhood, music was my first love. It's taken me quite a long time to work out how I want to introduce my music, both sonically and visually. I’ve been working on a full-length LP for a while and somebody suggested the idea of the triptych, like three songs all exploring the same theme from different perspectives. I was excited by the idea of making a short film in three parts that could stand alongside the tracks because three tracks adds up to classic short film length of 12, 13 minutes, so that ended up being an exciting way for me to introduce the emotional landscape of the music to people. I’m so excited about getting it out.

I haven’t seen the triptych as a concept in music before. What inspired that?

I grew up in a family of artists and triptychs are a big thing in visual art. In religious paintings, you’ll often see three paintings. The term is less familiar. Francis Bacon has done some incredible triptychs. The idea can be explored through visual art, writing, music, and there are some musicians that have done triptychs in the past, but I was just looking for a unique way to introduce the emotional landscape of music. I grew up on film sets too, so the visual aesthetic of the music is always going to be important to me, so this felt like an exciting way to say hello.

Who inspires you musically?

My ultimate musical hero is Loudon Wainwright III, who is a fairly old country folk singer and I just think he’s the greatest lyricist of our time. When I was 14, I was starting a new school and my best friends were really into British indie music and they sweetly introduced me into it and it took me a minute to get into it. They were all really in love with Bombay Bicycle Club and I was like, “I can get down with this but it’s not my favorite thing ever,” and they had one track and I was like, “I really like this.” I went on YouTube to watch a live version and this one track — “Motel Blues,” — it wasn’t their track, it was a Loudon track, and I found myself in a deep Loudon wormhole that lasted for years. I am super influenced by people like Joni Mitchell and Bob Dylan, and more contemporary influences, Phoebe [Bridgers] is a huge influence. James Blake, Bon Iver, that old school of atmospheric, experimental, but very focused on storytelling, that really excites me and I’d love to be a part of it.

I started acting at such a young age and I used to go into audition rooms and casting directors would ask me classic platform questions like, “What have you been up to, Ella?” and I’d ramble on about my dog and weekend and best friend’s pet iguana that had just passed. My mom caught wind and was like, “Ella’s rambling in casting,” and wrote me a script of how I was supposed to answer those sorts of platform questions and it led to a broader conversation with my parents, who are in the arts, about how slightly annoying it is, but a big part of the art is talking about the art and making peace with that side of things. I feel really grateful to have had parents that taught me how to do that at a young age. Before the Dickinson press junket, I sit down and think through the season and I write myself a little script. I’ve been so nervous about talking about music stuff. With acting I’ve done the junket so many times, but with music I’m just like, I don’t know how much of a script I want there to be, but I need to somehow know how to talk about the music.

On that note, how does it feel to be wrapping up Dickinson?

We've all thrown around the word bittersweet a lot. That is the most accurate word for the emotions we’re going through. It does feel like a momentous moment in my life. It's such a big closing. It’s a closing of what has been such a big chapter for me as an artist and as a person.

When I got Dickinson, I’d just turned 20. I was moving to New York. I had never been to this city; I didn’t know who I was or how I wanted to identify. I’m still answering those questions on a daily basis, but Dickinson created such a safe space for me to try on different versions of myself and get to learn and play amongst the most amazing company and inside the most creative, playful writing from Alena [Smith, Dickinson’s showrunner], writing that's been such a joy to sink my teeth into and it's one of the things I’m most sad about letting go of is playing within Alena’s sphere. It’s such a treat to get to work with writing as good as Alena’s is. She really writes for the actor; she’s a playwright at heart. The more I think about the show, the more I see it as a three-act play: the third and final act is the meatiest. We go to the darkest places with the characters. We see them at their greatest highs too. The universal feeling for the whole cast is that this season is the most fun of all.

In this season your character is pregnant with Emily's brother’s baby, but she still loves Emily. Situations like this were the reality for so many women in this time who couldn’t come out. What is it like to hold those two things as an actor? Why is that an important story to tell?

I was delighted that Alena chose to take Sue’s story in this direction this season. There is a world where we could have avoided Sue getting pregnant, but I’m really glad we didn’t avoid that because it was a fact of her life. It did happen in this time and there’s so much growth that happens with Sue between Season 2 and Season 3 of the show, and a huge amount of that is accepting her love for Emily. It allows Sue this new sense of ease and playfulness and messiness, and acceptance of the messiness of her life, and it’s beautiful to see these characters that are so repressed feel things. Having this pregnancy storyline allows us to have these conversations about non-traditional family dynamics, which is always going to be a conversation within the queer community and as humans these days. I have so many friends in completely non-traditional parenting dynamics and it’s such a fact of our day to see people grapple with co-parenting in a non-traditional way and it was really exciting for Hailee and I to play with how both Emily and Sue are approaching the idea of womanhood in unconventional ways. Emily feels strongly that she doesn't want children and Sue, having not envisioned it for herself but accepted it was part of her lot as a woman, is not conjuring any way of being a mother. She’s allowing herself to see that motherhood doesn’t have to mean she can’t be with the person she loves who happens to be a woman. There’s lots of conversations that go on about, “Why can’t a baby have two mothers?” Just because it’s not what’s done [at that time] doesn’t mean it’s not what’s possible. It’s such delicious material to dive into and it gives me so much admiration for LGBTQ history and the journey we've gone on to get to a point where we can create family dynamics in all the ways we want to and identify and feel safe in outwardly expressing our identity.

There’s a line in the show about how Emily Dickinson was the original sad girl. That’s so funny. What do you think about that? What else can we learn from Emily?

I think what the show wants us to learn from Emily is to be fearless in our life choices and in our artistry and to not let the world put you in a box. I think it is about empowering the women of today to take courage in our artistry, because look at this woman in 1850, who all the odds are against her. Everyone thought she was crazy. She didn’t do things by the book and she wrote some of the greatest poems of all time because she was different. She was extraordinary. Because she was brave enough to be guided by her instinct, we have some of the greatest poems of all time. I think that is at the core of the show.