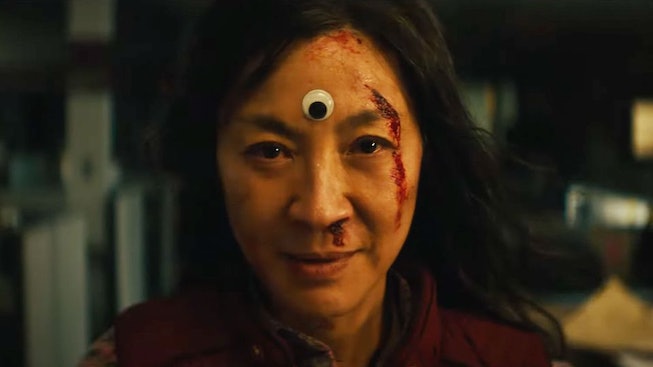 A24 teased the latest and greatest in their universe on Tuesday: the upcoming sci-fi kung-fu adventure flick Everything Everywhere All At Once, starring Michelle Yeoh, Ke Huy Quan, James Hong, Jamie Lee Curtis, Harry Shum Jr., and comedian Jenny Slate, which will be released March 25.

From the trailer, it’s a little hard to tell what the film is about. In a synopsis, we get that Yeoh stars as Evelyn, “an exhausted Chinese American woman who can’t seem to finish her taxes.” We see her talk to an unrecognizable DMV-energy Jamie Lee Curtis, then bounce around to different universes via a rolling office chair, where she’s shown as a chef, among other less distinguishable things. Yeoh is told there’s a “great evil,” and she “might be our only chance at stopping it.” Dun dun dun! We love a film that make you clutch the knee of the person next to you in disbelief, disgust, and mostly joy — and from what we can gather so far, Everything Everywhere All At Once will be the same.

Here’s what else we know about the film so far.

The film is directed by the directors known as “Daniels,” who A24 describes as “mad geniuses” in a tweet promoting the film.

“Daniels” are made up of Daniel Kwan and Daniel Scheinert, who are most known for their music videos (for bands like Passion Pit and The Shins, but also DJ Snake’s “Turn Down For What,” a song whose title you can’t read without immediately being teleported back to 2014). They pivoted to films a few years ago with Swiss Army Man starring dark horses Paul Dano and Daniel Radcliffe, which won them an award at Sundance.

It opens South by Southwest

The film will be in wide release on March 25, but will open SXSW on March 11. “We are thrilled to premiere Daniels’ latest work, which is fantastically inventive, entertaining, emotionally grounded, and crammed with the exceptional creativity that makes their projects so satisfying,” said Janet Pierson, Director of SXSW Film, in a statement. “Audiences are going to have their minds blown by this extraordinary feat of filmmaking.”

Awkwafina was originally signed on

Awkafina was originally signed on to star in the film (though it’s unclear which role), and Daniels even directed an episode of Awkwafina Is Nora from Queens, but she had to drop out due to scheduling conflicts in January 2020.

Deadline reported in 2017 that the Daniels had landed their first major film deal to write, produce and direct a science fiction film allegedly “as original as Swiss Army Man.” With A24 on board, we have no doubt that’s possible.

The trailer is a high-octane ride

As we eagerly wait the film’s March 25, 2022 release, you can watch the trailer in the meantime, below.