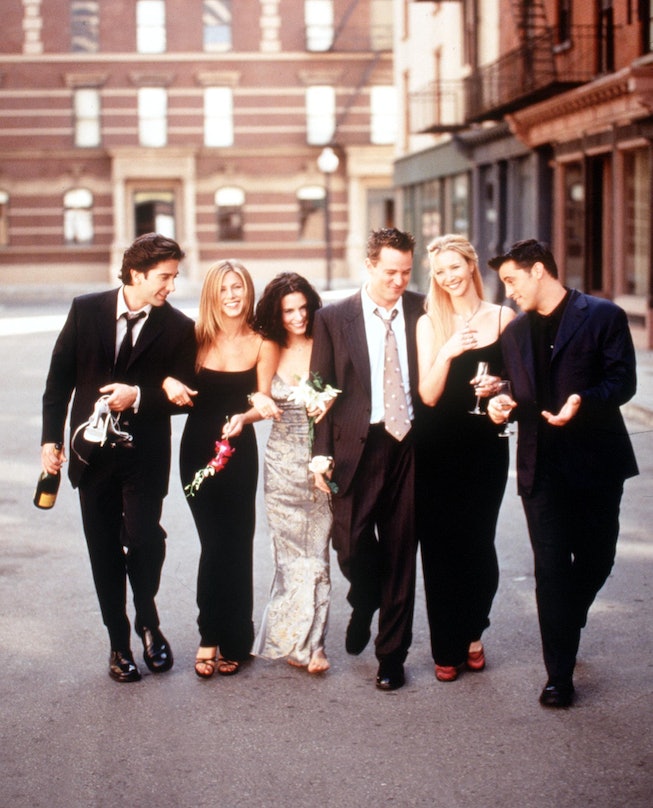 Nearly 30 years after Friends aired, the apologies for all the ways it failed its viewers are still leaking out. The series’ co-creator Marta Kauffman has in the past apologized for the show’s lack of racial diversity — even going so far as to donate $4 million to the African and African American Studies department of Brandeis University, her alma mater.

Now, Kauffman is apologizing for misgendering Chandler’s transgender mother. The character of Helena Handbasket, Chandler’s mother was always dealt with as a clunky joke, as well as the sole reason of his intimacy and trust issues. (Because we love to blame men’s mothers for all their issues!) Chandler frequently deadnames her, calls her “dad,” and refuses to accept her transition. Helena was also a bonafide star with her own Vegas residency with shirtless dancers wearing rubber rain boots, but nobody talks about that!

"We kept referring to her as Chandler's father, even though Chandler's father was trans," Kauffman told the BBC in an interview that runs next week. "Pronouns were not yet something that I understood. So we didn't refer to that character as 'she.' That was a mistake."

Surprisingly, the show had some self-awareness of a misunderstanding around pronouns, which is actually written into the script. In “The One With Chandler’s Dad,” a server at Chandler’s mom's cabaret show asks Monica if she’d like a drink, to which she responds: “She did. He did. She? I’m sorry, I’m new.”

I’ve seen every episode of Friends probably three times and I didn’t even realize Helena was trans because they never acknowledge her as such on the show, instead referring to her as gay or a drag queen.

“How they approached with me with it, was ‘Would you like to be the first woman playing a man playing a woman?’ I said yes, because there weren’t many drag/trans people on television at the time,” Kathleen Turner, who played Helena and is cisgender, told the Gay Times, adding that she thinks the show “hasn’t aged well.” (An understatement!) In a 2019 interview with Watch What Happens Live with Andy Cohen, she said she wouldn’t accept the role again, “because there would be real people able to do it.”

"I've learned a lot in the last 20 years," Kauffman told the Los Angeles Times in 2020. "Admitting and accepting guilt is not easy. It's painful looking at yourself in the mirror. I'm embarrassed that I didn't know better 25 years ago."

All of this being said, Helena’s Vegas cabaret show is worth a revisit. Watch it, below.