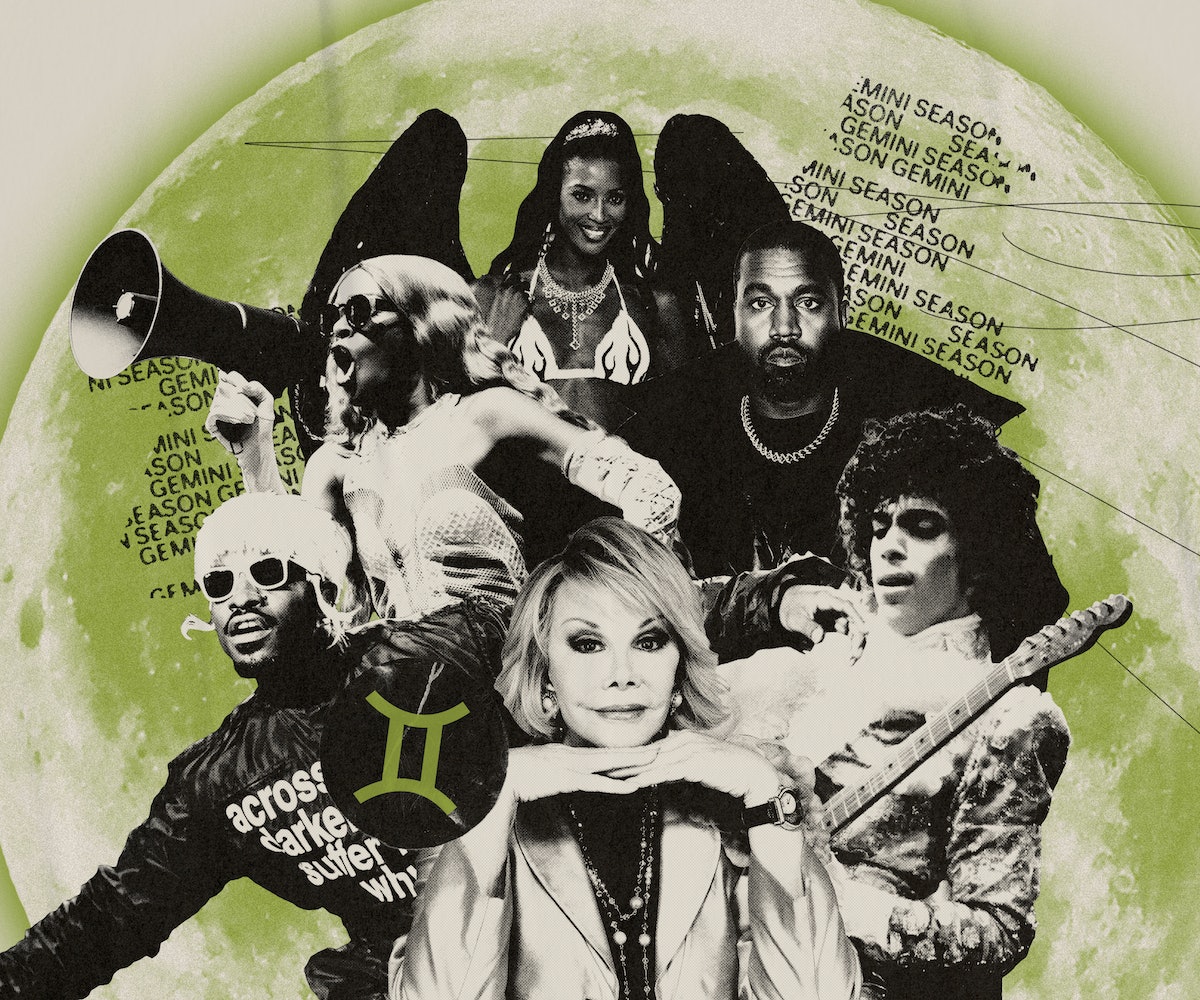 Aries emerges at the start of the zodiac like a dazzled infant: Everything is up for grabs, so long as it satisfies his immediate impulse. Next comes Taurus, eager to claim anything for her own, and, especially, to take it away from her siblings. And then, with the first peach fuzz of adolescence, there’s Gemini, craving only experience, with little regard for the consequences. The Gemini is John Connor at the start of Terminator 2, stealing cash out of an ATM and hitting the mall arcade. This is the sign of action at its purest.

Along with siblings Virgo, Sagittarius, and Pisces, Gemini is a mutable sign, meant to close the themes of one season and ready us for the possibilities of the next. Gemini arrives at a key point of metamorphosis — from May 21 to June 20 — as the final strokes of spring build to the surging release of summer. From the intense cramming for final exams come the graduation ragers to follow. There is one form of being, and then the other, and no in between. Everything is split.

In traditional astrology, Gemini owns the intellect. As ruled by Mercury, the messenger of the Gods, its true emissaries are the masters of the written word: Think Andre 3000, The Marquis de Sade, and Jewel. But the word, once given form, is no longer of the body. By putting their inspirations down, Geminis lose them in the exchange. They retain nothing in the exchange of wisdom.

And so it is inevitable that Morrissey, or Boris Johnson, or Kanye West will say something outrageous, inflammatory, and nonsensical. Don’t they realize how it conflicts with what they said yesterday? Aren’t they aware of how many people they are offending? No, they aren’t, and stop embarrassing yourself by trying to teach them a lesson. Geminis exist purely in experience, and, when the dust settles, they’ve already moved onto the next event. Cancers keep history; Geminis live it.

At the Gemini stage of evolution, the astrological self is formed only of what it sees, feels, and desires in the moment. Fellow air signs Aquarius and Libra, when operating at their most efficient, seek to unite all people, either interpersonally (Libra) or globally (Aquarius). What Aquarius transmits, Libra receives, making Gemini the transmission itself, the message at its most essential, ricocheting through the air waves. It is voice embodied, expression without context. Perspective would leaden its wings.

Such intensity of presence can make Geminis the best there is at what they do, if they can stay in place and do it. Prince, Tupac, Naomi Campbell, Judy Garland, John F. Kennedy, and Joan Rivers did it, definitively and supremely. The point to remember with Gemini is that there may not always be a point. The drive, the focus, and the ability to act as vessel may be beyond reproach, but what is the endgame?

Gemini’s clear channels of communication reveal more of the truth than we can handle. And so come the Cassandras of the sign: Anne Frank, Edward Snowden, and Azealia Banks. They are burdened to serve as portals, vessels, oracles. And they couldn’t close the transmissions if they wanted to.

Azealia Banks may be the ultimate Gemini avatar, if such a flaky sign could have just one. See her feud with Cardi B, which showcases the Gemini greatest hits collection: a head-first dive into avoidable chaos; unmatched intellectual rigor; annihilating turns of phrase; deflections of trite moralism; and, by the time it’s over, the impulse to move onto the next controversy. And there will always be another controversy. Last December, Banks pulled a Beth Harmon and engaged the entire pop-girl pantheon in concurrent Mortal Kombat, showcasing, once again, the untouchable volume of Gemini’s creative release. Get out of the way.

In celebration of her sign, let’s not deal with the right and wrong of Banks’ statements — which could take several years, and several lawsuits, to sift through — but instead focus on the accuracy, and the exactitude, of what she hits on. Though she unleashes her views in endlessly creative, increasingly outrageous ways, there’s likely some truth to them, no matter how uncomfortable it makes us. As Banks progresses through her Saturn Return — in full swing through October — her truth, or its style of deployment, may find refinement. For a Gemini like Banks, the words come fast, strong, and with devastating effect. But that’s second nature. Subtlety must be learned.

Is Gemini godless? Or is it that the twins are so close to the divine that they don’t even realize it? Gemini, like Virgo, is ruled by Mercury, planet of communication, and messenger of the Olympian Gods. For Virgo, Mercury acts as the doer, or fixer, of the pantheon; but the Mercury of Gemini is an agent, or ambassador, the direct voice of the Almighty. Mercury is a one-way channel. Sagittarius, at the other end of the spectrum, can clap back at the call of the gods, and seek meaning in their revelations. But Gemini is the word made whole. It is Alanis Morissette, God incarnate in Dogma, turning up in a tulle skirt and flip flops, blowing off the head of Ben Affleck. What further explanation is necessary?

To break down this connection to the divine, consider the four mutable signs: Virgo represents the body of Christ, suffering on the cross; Sagittarius flings him to the heavens in perfect apotheosis; and Pisces readies us for his return. Leave it to Gemini, then, to represent the living years, in which his actions were immediate and personal, before he had a movement or a meaning. To be a Gemini is to live. Leave the consequences to the other signs.

NEXT UP
Astrology
Get To Know Aquarius, The Certified Freak Of The Zodiac
Astrology
How to Use Astrology to Access Past Lives
Astrology
Your February 2023 Horoscope Is A Breath Of Fresh Air
Culture
Spice Girls May Reunite For King Charles’ Coronation
Style + Culture, delivered straight to your inbox.