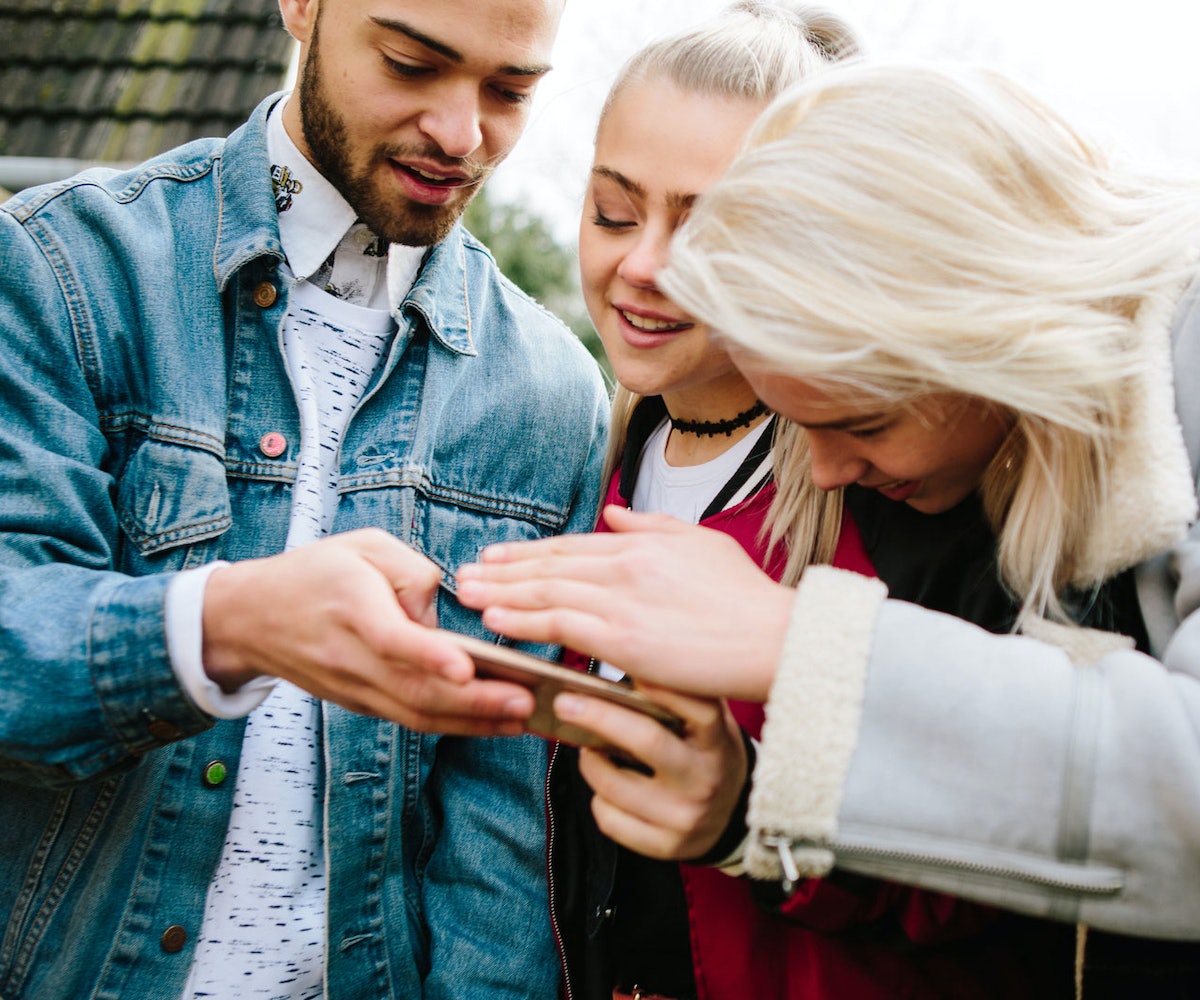 Instagram was fun. The app launched while I was still in high school, and my friends and I marveled at the opportunity to masquerade as photographers who clearly had an eye for all that was worth posting. Later, when Instagram stories were introduced, I effectively behaved like I was some sort of small-scale influencer. (I, of course, influenced no one.)

As a Gen Zer, I’ve grown up on social media platforms; first, the now defunct social network Piczo, where I ran fan pages dedicated to Disney Channel stars like the Jonas Brothers, and in my teenage Tumblr, where I was furiously dedicated to thriving K-pop fandoms and Taylor Swift. I’m used to apps being my world and then slowly fading to the background. So when I decided to archive all my posts on Instagram, remove almost all my followers, and go inactive before making a new account, I thought I had outgrown social media platforms entirely.

But then came TikTok in 2019. I felt free and entertained; my anxiety of being perceived on social media wasn’t as much of a worry when it was a constant conversation on TikTok. Instagram suddenly felt boring, exhausting, and generally not fun compared with it. And then, global lockdowns hit, and as TikTok quickly became the most downloaded app in 2020, it also officially became my most used social media platform.

Last year, TikTok hit 1 billion monthly active users globally, and according to a recent study in the United States, more Gen Zers now use TikTok over Instagram. Though TikTok is often wrongly understood as an app where young people just learn dances all day or make fun of millennials, for some members of Gen Z, the promise of the app is largely dependent on it serving as a better alternative to Instagram. As Instagram continues to shift its focus its video-sharing feature “reels,” creators have been frustrated with the move; while some have stayed and adapted, others have moved over to TikTok and grown their brands there. Some have limited their use on Instagram, only posting rarely.

TikTok is an easier place to go viral or attract thousands of followers. This is due to the famous TikTok algorithm and the curation of your own personal For You page, or FYP, explained by TikTok in a press release last year as a way to “reflect preferences unique to each user” through adjusting videos based on what you may or may not be interested in. The algorithm looks at content you may have engaged with before, the sounds you use, and even your location. The TikTok algorithm that creates your own personal FYP based on your likes and watched videos, combined with the fact that there isn’t much of an expectation for influencers or content creators to always look perfect, means that some TikTok creators feel more motivated to post on TikTok.

“On TikTok, you can get viral much more quickly and reach way more people than on Instagram,” says 18-year-old Jessie Mae Alonzo, TikTok creator and actor based in Nottingham, England. “I don’t post much on Instagram because I feel like my posts need to be of a really good quality to do so, but on TikTok, if I do a lip-sync video and it’s not really perfect, I’ll post it because nobody cares. Plus, I don’t want to feel forced to post content for the sake of posting.”

For Alonzo, who has more than 800,000 followers on TikTok, it’s easier to post more regularly on TikTok due to the app feeling less pressured than Instagram.

Hana Ali, an 18-year-old university student from London, England, and a TikTok creator, echoes this. For her, TikTok has served as a better alternative mainly because Instagram is “too serious” and feels like people mostly use the app to show off their accomplishments or best moments in their lives. Ali, who regularly posts chatty and comedic videos on TikTok, has more than 25 million likes across her videos.

“Who goes on their phone and says ‘Yes, I am going to go on Instagram and have a good time’? No one says that! People go on Instagram to watch other people. On TikTok, I have half a million people watching me, yet when I post a photo on my Instagram account with nowhere near as many followers, I am shaking.”

For Ali, who has a love-hate relationship with Instagram, there seems to be somewhat of an unspoken rule that your posts need to be good enough to post; you need to have makeup on and look presentable. On TikTok, though, her understanding is different: “On TikTok, I couldn’t care less how I look; people are generally there for your personality and to laugh. The way I present myself on TikTok is a way more accurate reflection of who I am when compared to my Instagram profile,” Ali says.

During the height of the global lockdowns, while our Instagram feeds were being inundated with home-baked banana bread and celebrities attempting relatability by posting themselves in their pajamas in their massive mansions, TikTok became somewhat of a safe haven. A place where you could just have fun learning dances but also poke fun at the chaos in a way that only others on your FYP would understand. As a result, content creation on TikTok became less pressured and more casual.

“On TikTok, I genuinely have fun,” says 22-year-old TikTok creator and influencer from London Victor Kunda. “TikTok is all about personality. The app has created this new kind of influencer, one that is more down-to-earth and more accessible. The app just feels more low maintenance than Instagram. As sensitive as TikTok can be, it feels like a safe space.”

Kunda says that when compared with Instagram, TikTok feels more like a community, and so content creation is more fun there because the app feels less formal and rigid. For example, on Instagram, brand sponsorships just feel like a drag, for both the influencer and the followers. It’s almost as if you can see the sponsored post requirements all over the caption and the influencer is almost being held against their will to make this post, whereas on TikTok, popular creators will poke fun at their sponsorships and ask their viewers and followers to support, despite it sometimes coming across as cringe.

Although TikTok is not a perfect app with growing issues on shadow-banning or censoring content from Black creators for posting Black Lives Matter content, for young creators on the app, the promise of a more politicized app is something that is easier to identify with than the often tone-deaf, an-infographic-a-day-makes-you-an-ally Instagram feed. For 20-year-old Isobel Dye, whose activism videos have been liked more than 14 million times, the FYP curation is a plus since you can control what you see. This in turn makes it easier to be a content creator on the app, since the algorithm favors your video with others who have similar interests.

“It’s hard to gain traction on Instagram, but on TikTok, it snowballs. As soon as I found my niche, my profile grew online,” says Dye. “One of the main reasons I use TikTok more is because you don’t feel like you need to always post content where you are the best version of yourself. Plus, Instagram is embarrassing.”

There’s been a shift regarding the definition of “aspirational,” certainly among the Gen Z community. “Instagram-worthy photos” created the perfect storm for a platform filled with pretending, something that even the rise of “photodumps,” curated, slice-of-life photos across a period of time, can’t undo. On TikTok, while influencers still opt in for some element of romanticization of their lives, there is a need for something beyond pretty photos and exclusive breakfast spreads. TikTok has evolved more quickly than its lifestyle competitors can hope to compete with, opening up a space for millions to connect over shared “Am I the only one who noticed?” thoughts. On TikTok, you can get your moodboard inspiration and your favorite creator informing you on what’s happening in the world, all neatly packaged in your FYP. And unlike on Instagram, you can do it without feeling like you’re the only one who is a mess.

NEXT UP
The Art Issue 2022
True Life: My Partner Is Obsessed With NFTs
Culture
Allie Rowbottom’s Novel Aesthetica Isn’t About Instagram — It’s About Survival
Culture
An Exhaustive Breakdown Of The Balenciaga Controversy
Culture
Spotify Wrapped Is The Only Social Media That Doesn’t Lie