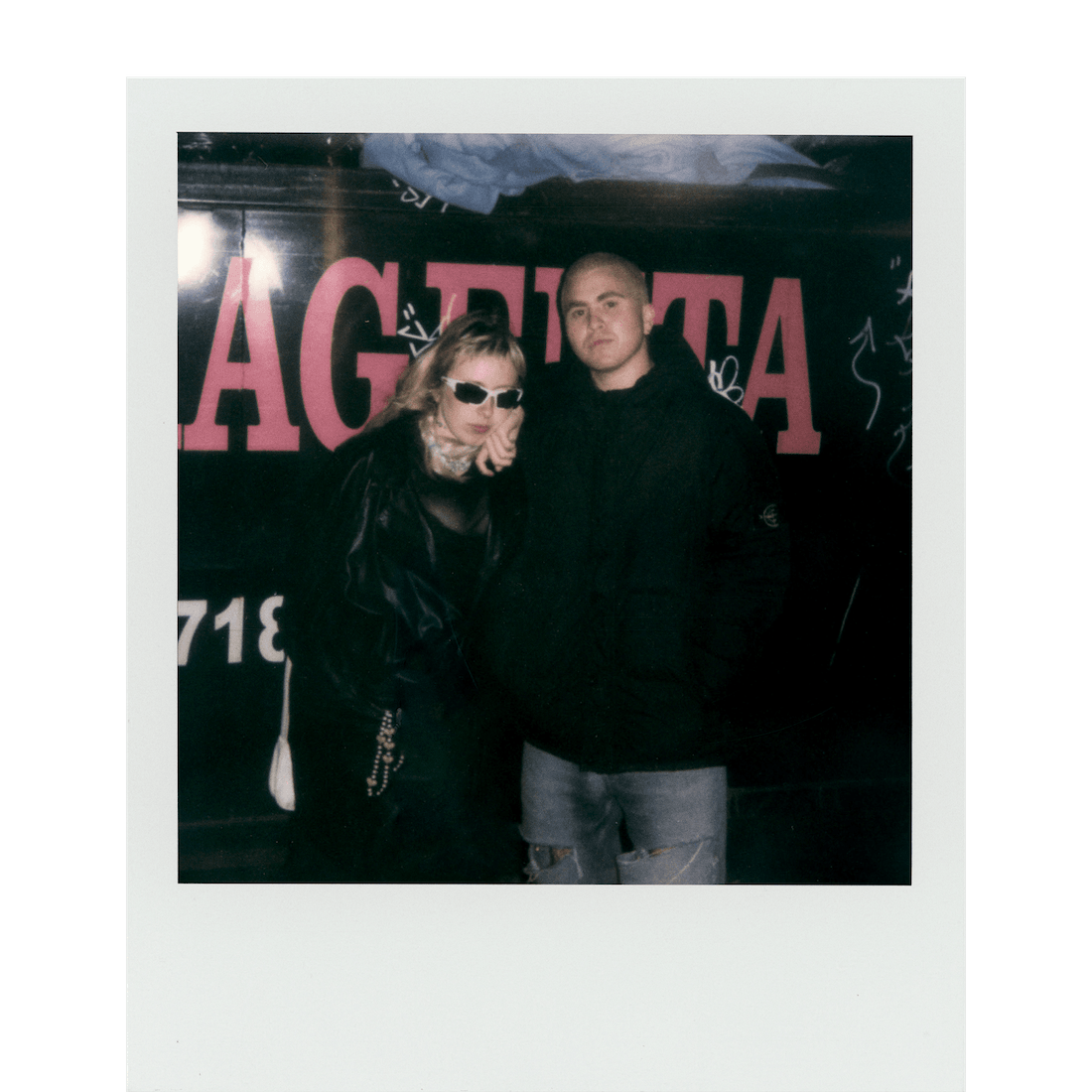 A Night Out With Girlpool

Girlpool’s ‘Forgiveness’ Is Their Most Expansive Rock Yet

Inside ‘Forgiveness,’ Girlpool’s fifth studio album and the beginning of something raw and new.

During a three-hour dinner with Avery Tucker and Harmony Tividad, the duo behind the Los Angeles-based band Girlpool, there was rarely a silent moment. We started talking even before we were supposed to meet up at the Bowery Hotel’s Gemma, in an emoji-filled group text where all three of us were, thankfully, running 10 minutes late. Tucker and Tividad pepper their conversations with constant affirmations: “cute,” “love that,” “beautiful,” they say as they show me and each other photos of everything they’ve done in New York in the past few days. There’s the best tiramisu of Tucker’s life, pygmy monkeys from the Bronx Zoo that Tividad notes “weigh less than an iPhone 6,” and the wholesome ritual Tucker and his girlfriend have recently found themselves in, of sharing a cookie every afternoon.

They’re not doing any of this for my benefit, by the way. Though they’re in New York to play an album release show for Forgiveness, their fifth studio album out April 29 on ANTI- Records, which they played earlier that week at Baby’s All Right, they're just genuinely catching up — even though it’s only been a day since they last saw each other.

The essence of Girlpool has always been the sweet friendship between Tucker and Tividad, which has been described as “telepathic” on more than one occasion. At Baby’s, all they had to do was share the same microphone, tooth gems glistening under the stage lights, for half a song to prompt 50 iPhone cameras to pop up into the air like hungry prairie dogs.

But hanging out with Tucker and Tividad doesn’t feel like third-wheeling: It’s like hanging out with the type of friends you trust instantly because you know you’re both down to get real — an experience that listening to any of their albums mimics: a feeling of being seen for all your ugly, complex feelings as well as your joys. As people who long to get closer to the heart of the world tend to be, they were as curious about me as I was about them. “I feel like I'm talking so much for an interview that’s about you,” I tell them as they hold my iPhone and scroll through the Instagram of someone I met on Tinder. “He’s hot,” “love this for you,” they nod in approval. “I love what we’re doing here,” Tividad announces as she sticks a fork into a wheel of calamari. “I’m just really down to be open.”

After a round of Aperol spritzes, Tividad inspects one of the Polaroids I've taken: “We look blissed out,” she says as she positions her iPhone over it to take a photo. I suggest it's the feeling that happens after you polish off a plate of burrata, which she’d described as “insanely good.” But for two artists with a highly anticipated album being released in less than a week — one that takes more sonic risks than any prior release — Tividad and Tucker seem at ease in themselves, like the anxieties they sing about in their songs don’t wear them down.

Part of this is because they both excavated a lot of those anxieties on the album, with the untethered candor and honesty that’s essential to Girlpool. On the opener, the delicate and biting “Nothing Gives Me Pleasure,” Tividad’s voice rings out in crystal-clear Auto-tune over glitchy drum programming: “Do you even want me if I even have to ask?/ Break it to me gently with your fingers up my ass.”

“All the songs I wrote about with guys or whatever, I was, like, not OK,” she tells me. “I was in a dark place and I was doing a lot of stuff to get attention or feel the love or try to push the limits of it.”

Wedged into a booth, sitting across the table from me, wearing a mesh top over the corset that’s become a signature look for her, she explains that she started sexualizing herself more, and felt less reliant on her intelligence or her sense of humor. “My whole life I felt like, I have to be smart or funny because I’m not ‘hot,’ and then eventually I was like, I am hot; I can play with this and hence the spiral of toxic and bizarre sexual experiences,” she says. “There was an era where a lot of the songs for Forgiveness that I wrote were fueled by my inner negativity with myself and trying to feel positive.”

Similarly, on “Faultline,” a dream-like waltz, she sings gut-punch lines in a singsongy cadence like: “My body's just a landscape for your sin,” and “I loved you so traumatically that I/ Can barely lift the world you left for me.”

“I remember saying to Avery after ‘Faultline’ was coming out that I felt like I would end up being in a healthy relationship or something because ‘Faultline’ felt like this is a huge part of my personality that has been a burden to me, and same with ‘Nothing Gives Me Pleasure,’” she says. “Both of those represent things in myself that I think are ugly or cause me a lot of suffering or are a cycle of suffering that I continue to interact with.”

The memoirist Lisa Jones once described writing as building a structure out of your own discomfort so that others may take shelter there, which is what any good art does. Intimacy and candidness are key parts of how Girlpool shows up in the world, and in their songwriting, Tividad and Tucker toe the line of what feels just uncomfortable enough to share.

“Both songs are so intimate, almost too intimate to share, like really bordering a point I actually can’t show people,” she says. “But I have to speak my truth or whatever and now I’m in a very wholesome, beautiful, loving, not complicated situation with a really wonderful partner. It feels like a product of the healing that that writing process was for me. It’s not random.”

I ask if it ever feels like too much pressure, if either of them ever feels like something is too personal to share. While a number of Tividad’s songs deal with excavating self-delusion and desperation around relationships, Tucker explores his relationship to his masculinity after transitioning in 2018, particularly on the acoustic ballad “See Me Now,” where he sings: “When I was young/ for a girl, I was tough/ now I’m figuring out/ how you see me now.”

“Maybe that’s the whole point,” Tucker says, describing the song as a “postcard from a feeling.” “Going all the way there, so that it's the most f*cked up you can be.”

“Sometimes I'll write a song and be like, I didn't know how badly I needed to say that,” Tucker adds. “And then it's so crazy because people can feel how badly you need to say that and that’s what pulls you in and that’s why I always want to hear music that’s–”

While the confessional nature of Girlpool’s albums is the throughline of the entire project, it only makes sense that some secrets are revealed in a whisper and other things in a scream. Forgiveness is sonically more ambitious than any of their past work — using synths and drum machines to explore electronic and industrial pop sounds that buoy the band’s signature aspects, like their effortlessly stacked harmonies or heart-clenching ballads.

The recording process was also different; for the first time, Tucker and Tividad let producer Yves Rothman, who’s worked with artists like Sunflower Bean and Yves Tumor, into their union to help push them to make the album more expansive. But to find the heart of the songs on Forgiveness, first they had to blow them up to see how far they could take them production-wise, before stripping them down again to find their soul, like planets realigning after a meteor; you can’t have concision without expansion.

“Junkie,” a stripped-down, Christian terminology-laden song about love and addiction, for example, had “epic drums” and then they pulled everything out and added a “Drake beat,” making it sultry, subtle, and a little chilling. “Lie Love Lullaby” is a hypnotizing, industrial pop song that was taken “endless places,” Tividad says, while they explain that “Violet,” a stripped-down rock ballad, was like a “Dido-trap thing.”

“Sometimes songs can get diluted in production,” Tucker explains. “You go back on your iPhone and find the original voice memo when you wrote the song and you’re like ‘there’s the soul.’”

For a band that’s been making music since they were teenagers, it would be stranger to stay the same than it would be to change, particularly when you consider the profound transformation one undergoes during the ages of 17 to 27.

“When I was a kid I was scared of change and now I'm obsessed with it,” says Tividad. “I think willingness to change is sexy. It’s brave to be different than you were in the past.”

People who don’t expect Girlpool to change are missing the point of the entire project. It’s not that this album is more pop or electronic, and that’s why Girlpool is different — what makes Girlpool special is that, though everything, Tividad and Tucker continue to make Girlpool work.

The waiter notices us discussing the calamari and hesitates before taking it away. “We’re finished, we’re just unpacking the experience,” Tividad tells him. I’m more interested in what we were unpacking before we decided we were all too full for a main course, but not for another drink: what exactly makes Girlpool unique.

“What makes us honestly weird is that we stayed doing this. We started doing something that made us a specific thing and it worked and we literally turned it into something else instead of being like, ‘OK cool we did that,’” Tucker says, with Tividad nodding and peppering in “right, right, right.” He continues: “I don’t know, I think as we have gotten older, we’ve grown more into ourselves. It’s been interesting to feel more like, oh this is what I want, this is what [Harmony] wants and before we were out there together–”

“I think that if anything,” says Tucker, “what this band is an ode to is flowing within a relationship.”