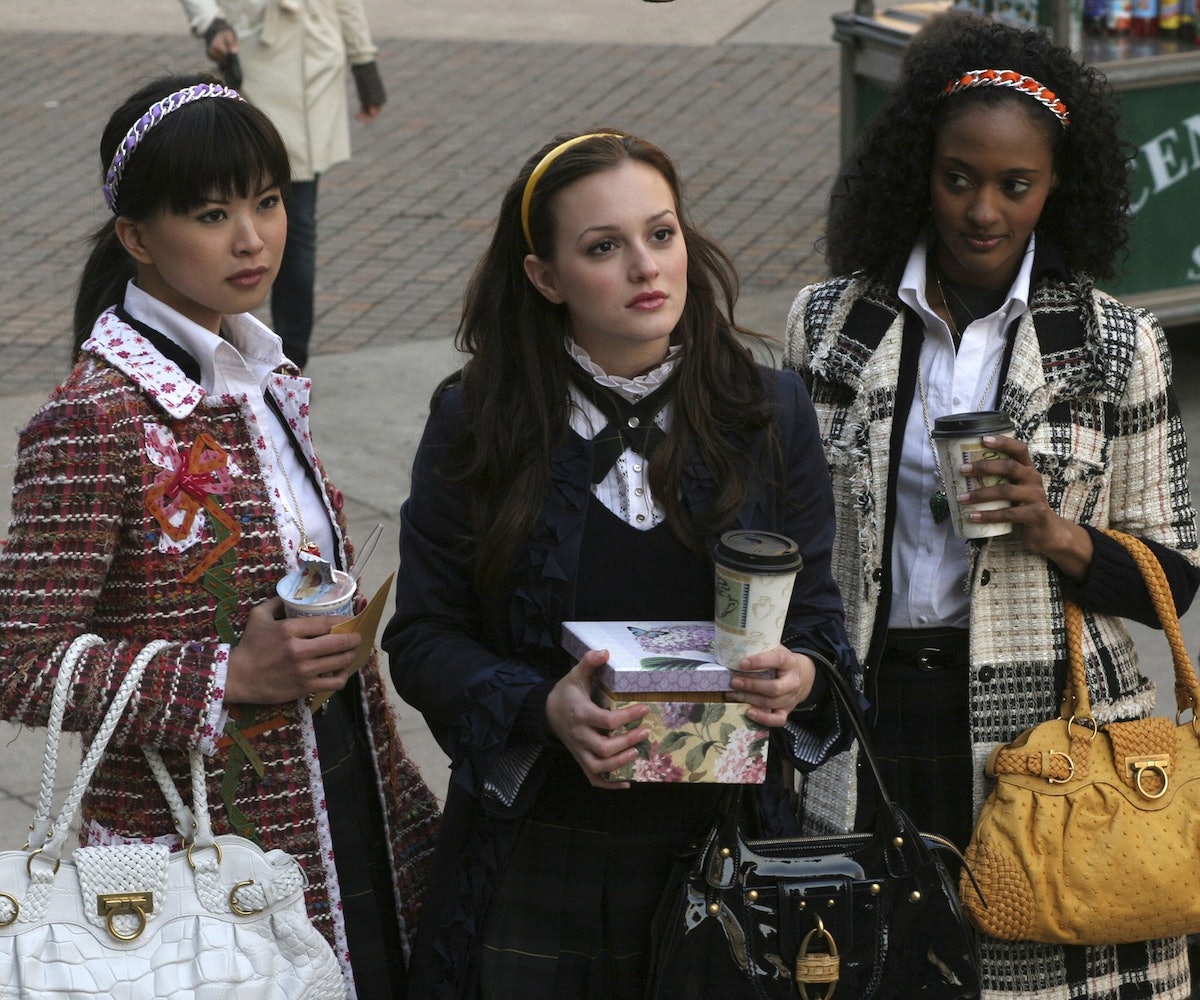 Gossip Girl is a Cartier treasure trove of musical moments that are nothing less than astonishing – from the series’ cold-opener Peter Bjorn and John’s “Young Folks,” as we see Serena arriving at Grand Central after she suddenly left New York admist scandal, to a live performance of Lady Gaga’s “Bad Romance.” (She’s there because, as Blair explain, her stepfather and Gaga “used to play cards together; who do you think Poker Face is about?”)

But there’s one musical moment that will never leave my brain: the choir performance of Fergie’s “Glamorous” that opens Season 1, Episode 3. It might be dramatic to say, but much of my bottomless love for Gossip Girl can be attributed to these 60 seconds of the show’s six seasons. Onscreen, we see Jenny Humphrey in a group of prep school girls dressed in peak private school outfits: Peter Pan collars and plaid skirts with American Apparel tube socks, their hands clasped together like obedient children.

The performance encompasses everything I love most about the show: it’s campiness, it’s ability to not take itself too seriously, it’s ambition, how it both celebrates and satirizes opulence, it’s grasp of high and lowbrow culture, and how it masterfully captures the peak late-aughts. Is there anything more the year 2007 more than an a capella version of a Fergie song sung by private school girls who moonlight for the cast of Skins the moment class is out of session?

It’s also worth contextualizing this a capella performance in the greater timeline of the trend that kept the late aughts in a chokehold, a trend of which the inner canals of my eardrums are still recovering from. Gossip Girl’s a capella performance of “Glamorous” was in 2007, two years before Glee began terrorizing airwaves, and by the year 2010, you had to dodge roving groups of a capella hopeful high-schoolers practicing harmonies in hopes of making it on The Sing Off. By 2012, a capella had overplayed its hand with the release of Pitch Perfect and the god-forsaken “song” “Cups.” Living in proximity to a college campus in the late aughts meant that any atrium could — suddenly, and without warning or the consent of passersby — be the site of a dozen too-cocky young men bursting spontaneously into a rendition of Timbaland ft. OneRepublic’s “Apologize” while snapping their fingers and grinning with smug overconfidence. But Gossip Girl managed to do the impossible: it made a capella — an inherently lame, earnest thing to do — cool and self-aware, because it embraced its ridiculousness.

Much of this is, of course, due to the song. We have to give credit where it’s due and in this case it goes to Fergie, who, in the likes of Jennifer Lopez’s “Jenny from the Block” and Gwen Stefani’s “Luxurious,” created an anthem about staying true to yourself amidst wealth (as well as a party banger that’s transcended decades by inviting its listeners a chance to spell the word “glamorous” out loud). It’s timeless, reaching a new cultural significance recently, with Jack Harlow sampling the chorus in “First Class,” which has likely taken over your FYP on TikTok.

But “Glamorous” has an even deeper lore in the Gossip Girl-verse: Last year, a previously unearthed alternate intro sequence for the show was surfaced on Twitter, which used “Glamorous” as its theme song. The intro looks like it came straight out of a ‘90s soap opera, with the actors looking directly at the camera and doing things like flipping their hair, interspersed with shots of them toasting champagne to align with the lyrics, “popping champagne, living the life.” There are so many reasons why the opener could have been scrapped, but we’re glad “Glamorous” found a less earnest placement in the show.

But the song certainly deserved a place in the show’s iconic soundtrack, which includes mid-aughts gems like Ting Ting’s “Shut Up and Let Me Go” and Gotye’s “Somebody That I Used to Know.” “Glamorous,” is, after all, the secret theme song of Gossip Girl: a self-aware tale of remaining yourself amidst opulence, which the characters in the show can never do because they were born into it, making it the campy satire that makes the show a perfect relic of its time.