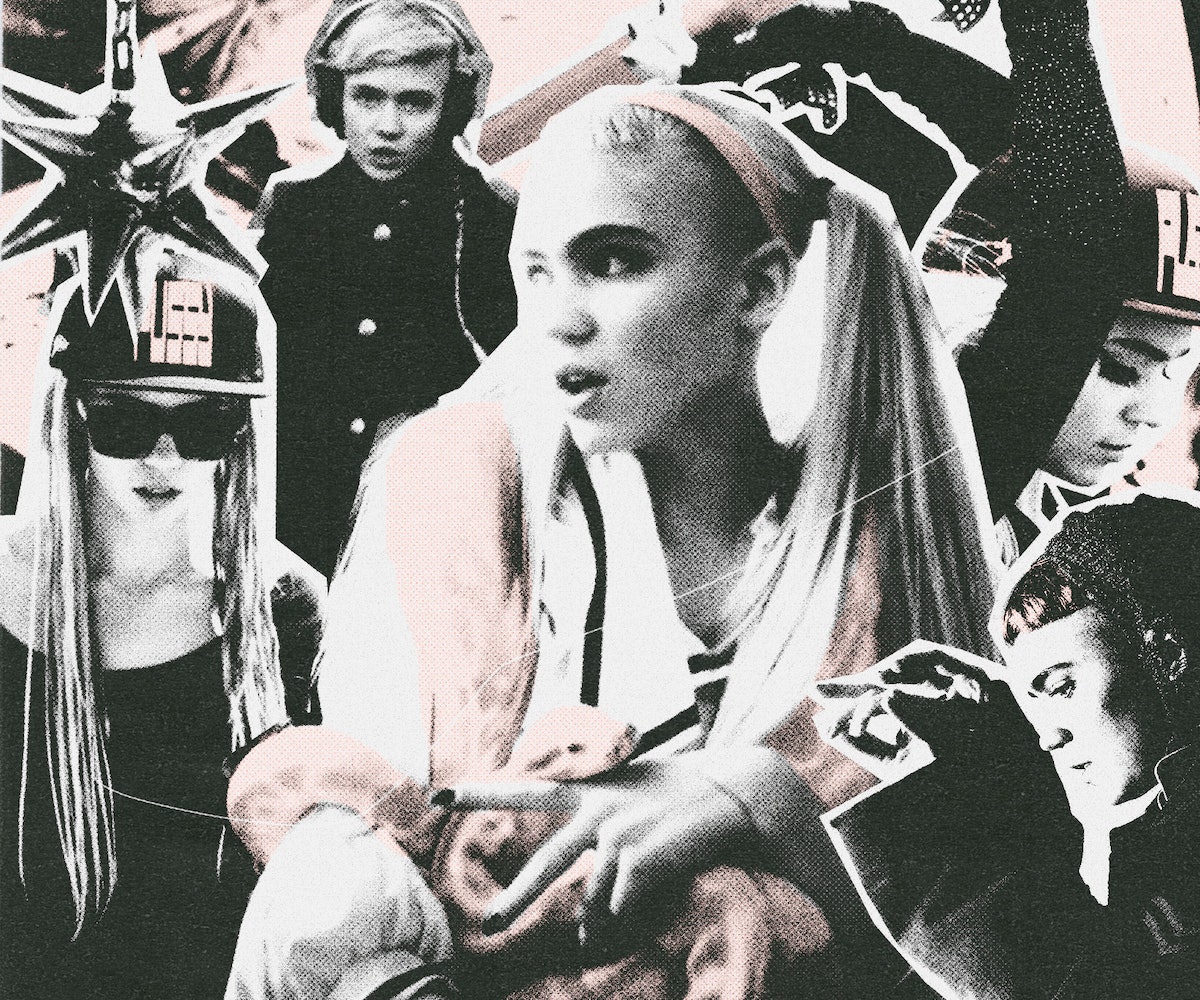 Ten years ago, pretty much everyone knew some iteration of the Visions origin story.

We talked about it like our parents talked about Pet Sounds — with a vaguely annoying combination of pseudo-authority, morbid curiosity, and reverence. The agreed-upon details went something like this: Claire Boucher, the 23-year-old DIY artist who had already released multiple albums as Grimes, locked herself in a Montreal apartment and blacked out the windows, the same time-warping technique regularly utilized by casinos and strip clubs and illegal raves. According to legend, she spent the next few weeks in a drug-addled creative delirium, relying on GarageBand and her own oddball intuition to produce a manic-feeling collection of esoteric earworms. I wonder if she had an inkling that the finished product would alter the trajectory of weirdo-pop music forever.

Grimes has long since confirmed the majority of the backstory’s more colorful details: “I’d probably die if I tried to do that again,” she told a journalist in 2015. But the mythos of her process wasn’t the dominant factor that made us gravitate towards Visions, which was co-released by 4AD and Arbutus Records ten years ago this week. That role belonged to the music itself, a highly textured muddle of bubblegum synth-pop and off-kilter club music. Visions sounded like the arrival of a visionary talent, a Kate Bush for the MediaFire generation. At its most transcendent, it fully embodied the early-2010s post-hipster zeitgeist while also gesturing toward something new and otherworldly — a duplexity that makes revisiting the album now feel akin to communing with ghosts of futures past.

It feels safe to say that when most people think about Visions, their initial memories coalesce around a pair of songs. First comes “Genesis,” an unassumingly rapturous modern classic with a clunky bassline and some oddly pastoral-sounding synths, the latter of which seem to swirl skywards like hypnotized snakes. (A Burmese python actually appears in the “Genesis” video, a surrealist urban fairytale that co-stars Brooke Candy and includes a new-agey intro not heard on the album version). The song really opens up around the minute mark, when a jittery drumbeat drops and the vocals leap ecstatically from a drowsy lower register to Grimes’ signature lispy falsetto. Like a lot of the slippery poetry across Visions, the “Genesis” lyrics are less words than feral incantations, helium-high vowel sounds looped and stretched into bewildering configurations. Yet their influence on the songs’ psychic impact is undeniable.

But it’s Visions first single that remains its most enduring artifact. With a rhythmically unsettled vocal pattern and an impressionistic synth line that feels just slightly offbeat, “Oblivion” sounds like a late-’80s mall-pop hit as interpreted by a punk alien who accidentally intercepted an FM radio frequency. The bridge’s wraithlike “la-la-la-la-las” also summon memories of ’60s girl groups, a probable touchstone corroborated by Grimes once saying that she was more interested in becoming a behind-the-scenes Phil Spector type than a public-facing pop star. The still-iconic “Oblivion” video capitalizes on those introverted tendencies, with a pink-haired Grimes bobbing around goofily in a series of male-dominated spaces: a motocross rally, a college football game, a steamy boys’ locker room. The clip’s fish-out-of-water tension generates its own brand of bizzarro charisma, prompting everyone watching in 2012 to ask themselves: Who said It Girls can’t have rattails?

The ripped-from-life “Oblivion” lyrics describe the anxious aftermath of a sexual assault. Lines like “cause someone could break your neck / coming up behind you / always coming and you’d never have a clue” communicate an enigmatic vulnerability, while also teasing the relatively more specific storytelling that would populate Grimes’ followup full-lengths. “‘Oblivion’ was the first song I heard by [Grimes], and I immediately loved it,” Waxahatchee’s Katie Crutchfield told Rookie in an interview about the lo-fi guitar cover of the song that she recorded with her twin sister, Allison, in 2013. That “Oblivion” more or less works as a scrappy indie rock song is evidence of its sturdy construction, of Grimes’ writerly chops. “It’s something a feminist punk band would write about, and the juxtaposition of that with electronic pop was really cool to me‬,” Crutchfield said.

While Visions never tops the one-two punch of “Genesis” and “Oblivion,” the album’s other standouts similarly highlight Grimes’ gift for genre-defiant world building. The hypnotic “Be A Body” feels manufactured to soundtrack a wee-hours rave romance; “Vowels = Space and Time” is a squeaky spin on Hi-NRG; and the brooding, six-minute-long “Skin” is what it might have sounded like if Enya ever composed a minimal techno breakup epic. While I’m not sure I agree with Grimes’ assessment that Visions’ hurried creation led to “filler,” some of the record’s less urgent passages do sometimes feel like pencil-sketched studies for later, more significant works. Even “Circumambient,” a brain-breaking curiosity in its own right, sounds a lot like an early stab at the demonic Jock Jams vibe she perfected a few years later with Art Angels highlight “Kill V. Maim.”

And yet Visions’ rickety, unfinished-feeling wildness is also one of its most charming qualities. The album feels tinkered with by human hands, an auteurist touch that has followed Grimes from record to record. Even her subsequent “mainstream-sounding” songs — like the polarizing “Go,” a hallucinatory EDM one-off that she co-wrote with her best friend BloodPop in the hopes of selling it to Rihanna — felt too weird for terrestrial radio; it’s always been impossible for me to imagine someone else singing it. Visions wasn’t Grimes’ debut LP, but it was very much a breakout, the first to widely broadcast a theory we now understand to be true: that she’s incapable of sounding like anyone but herself.

In a lot of ways, 2012 was the year that bedroom pop broke. Songs that people recorded at home went viral, and industry power players were scrambling to catch up with what was happening on mp3 blogs. Looking back, Visions seemed to almost perfectly coincide with the last gasps of an era in which being plugged-in to the online music scene felt even a little bit niche. In the months and years following its release, Kanye West would enlist experimental club producers Arca and Evian Christ to work on Yeezus, Rihanna would be accused of co-opting “seapunk” aesthetics for a performance on Saturday Night Live, and BloodPop would be tapped to work on songs by Katy Perry and Madonna. It’d be inaccurate to completely credit Grimes with spurring this boundary-shattering mingling between internet-y subcultures and the IRL mainstream mood. But it would also feel disingenuous to not at least acknowledge that Visions’ crossover reception was emblematic of that transition.

In April of 2012, Grimes performed “Genesis” on Later with Jools Holland. In the clip, she stands alone in front of a keyboard and a mess of sample pads, a homemade third eye plastered to her forehead. In 2022, it can be difficult to focus on the merits of Grimes’ art when so much of the occasionally valid and always exhausting contemporary discourse centers around her three-year romance with a billionaire tech bro, her contradictory politics, and her over-the-top self-mythologizing. But another ten years from now, when my thoughts return to Grimes, I hope I picture the frazzled free spirit from that Visions-era“Genesis” performance, the woman who grips the microphone between her neck and shoulder when she needs to adjust levels and trigger loops at the same time.