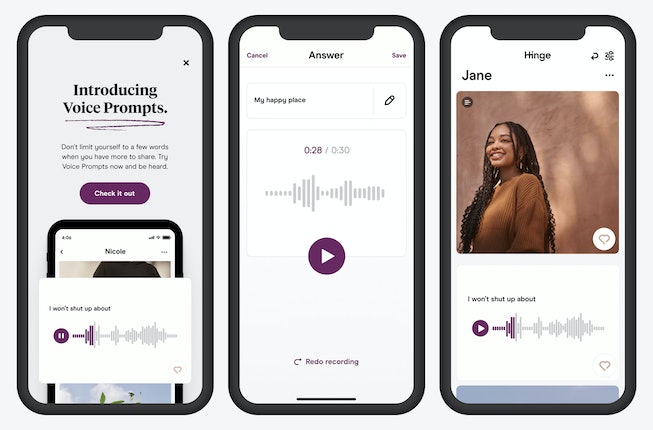 Hinge, the dating app that’s “designed to be deleted,” has become the first app to launch voice prompts, giving us all the chance to reject people based on not just how they look or how seriously they take the prompts (almost always too seriously!), but also on the sound of their voice.

For the fortunate uninitiated, Hinge differentiates itself from other apps by offering prompts for users to answer, like “Two truths and a lie,” “Change my mind about:” or “An overshare.” Voice prompts will offer users the potentially humiliating chance to put a 30-second voice recording on your profile for matches to hear, with prompts such as “Proof I have musical talent,” (though most guys include a video of themselves playing guitar in their bedrooms anyway) or “My best celebrity impression.” Hinge will also be introducing Voice Notes in the fall, where you can leave a voice memo for someone you’re messaging.

"Hinge wants to help people get to know you as soon as they see your profile. If a picture is worth 1,000 words, imagine how many your voice is worth," said Michelle Parsons, Chief Product Officer at Hinge in a release. "With the introduction of Voice Prompts, we're adding more authenticity to the profile experience, allowing users to fully display their personality in a new way. Our team's focus is to introduce product updates that help our daters move from the selfie to new forms of self-expression."

“It gives you a chance to check in with yourself early on about what the other person makes you feel, whether that's chemistry, confusion, or disinterest,” said Logan Ury, Director of Relationship Science in a release, who seems like he really gets the Holy Trinity of Feelings while on the dating apps.

In a recent Hinge study, 75% of users said that assessing chemistry is one of the hardest parts of modern dating right now, but two out of three Hinge users said that hearing someone’s voice would help them better determine if it’s “love at first listen’” or “the ick.’” And a whopping half of Hinge users have been turned off after hearing a potential partner's voice for the first time, noting they've felt either annoyed, uncomfortable, or disgusted.

To be fair, Bumble offers voice memo capabilities in message and after one guy I matched with sent me a voice memo, I quickly learned I never wanted to talk to him again. It might be vulnerable, but this stuff works! And like everything with online dating, at the very least, it’s entertaining.