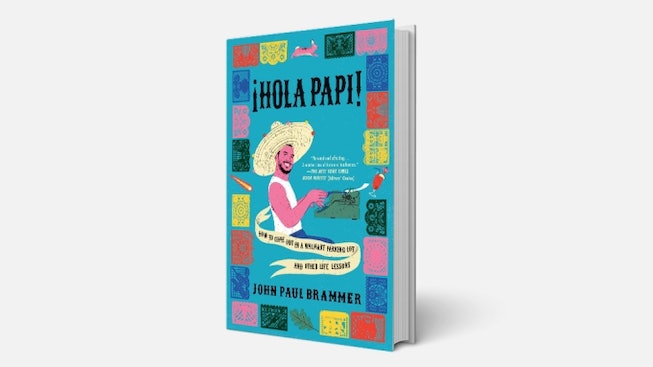 Prepare to watch someone on TV come out in a Walmart parking lot. Or at least, that’s a scene we’re hoping for: ¡Hola Papi!, the online advice column and now memoir by John Paul Brammer is set to be adapted into a scripted series by Funny or Die.

The “¡Hola Papi!” franchise is in a similar vein as other off-the-cuff, always funny, sometimes gut wrenching always personal advice columns like Heather Havrilesky’s “Ask Polly” and Cheryl Strayed’s “Dear Sugar.” Brammer’s is the queer pillar of that rise of advice columns that aren’t afraid to tell you what you need to hear, not what you want to hear. He started the advice column in 2017 and released the memoir ¡Hola Papi!: How to Come Out in a Walmart Parking Lot and Other Life Lessons last year. The memoir explores Brammer’s life growing up being queer and mixed-race in Oklahoma to becoming the “Chicano Carrie Bradshaw” of his generation. The paperback will be out in June.

“Working with the team at Funny Or Die is a dream come true, and I’m so grateful for the opportunity to take ‘¡Hola Papi!’ to yet another medium,” said Brammer, who will also serve as an executive producer on the series. “From the column to the book and now to the screen, watching Papi’s journey has been one of the great joys in my life. It’s a journey only made possible by my readers, and my hope is to make a show that will honor the trust and support they’ve given me over the years.”

“¡Hola Papi!” will also help to relaunch Funny Or Die, a concept whose origins date back to a time when Souljia Boy’s “Crank That” reigned supreme, after it was acquired last year by entrepreneur and activist Henry Muñoz III. Funny or Die brought us everything from “Between Two Ferns with Zach Galifianakis” to Will Ferrell meeting his foul-mouthed landlord who is also a baby.

“ ‘¡Hola Papi!’ is a great American Dream story that takes its main character from a small town in Oklahoma to the metropolis of New York City in pursuit of his future: new career, new friends, and new loves,” said Muñoz. “It’s funny, touching, and very much about American society in the 21st Century. We are committed to having Funny Or Die Studios stand for Funny, Original and Diverse content, and with a Latino and LBGTQ Plus hero, Hola Papi is a perfect fit.”

With the delightful train wreck that was And Just Like That, we’re eager for some other version of a Carrie Bradshaw character back in our lives. Even better if it’s the Chicano Carrie Bradshaw for this generation!