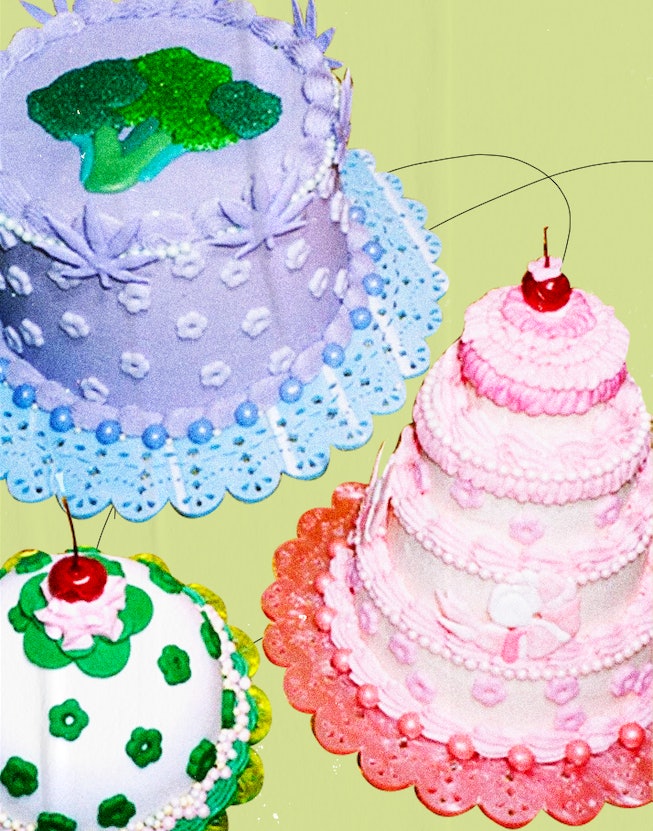 As with so many of us, I spent my first season of quarantine not quite baking up a storm, but perhaps a small squall. Lemon loaves, rosemary focaccia, and in the case of one particularly delusional Sunday afternoon, a triple-decker carrot cake all came out of my oven to varying degrees of success — until I realized that maybe I'm not a great baker at all. So instead, I took to Instagram, where the pie lattices never meld into one buttery braid and the icing is always Zamboni-smooth.

Several weeks later, I noticed that an army of cake-specific accounts had gradually infiltrated my feed. These were not just your average cakes: The flawless creations, coming courtesy of bakers all across the globe, look as if a pastry case from 1971 procreated with a Unicorn Frappucino. The retro dishes aren't like food at all, but instead a visual gravity blanket stitched together with silky frosting ribbons and glossy cherry buttons.

This left me with a few questions, namely: Where did these cakes come from? Have they been around all this time and I'm only just now desperate enough for the optical stimulation to notice them? But no question feels more pertinent than the following: When will I be able to host a wildly-crowded, definitely-not-socially-distanced dinner party where I can serve one of these concoctions?

At said dinner party, however, you run the risk of the cake being too exquisite to eat. For Coven Bakery's Harriet Gibson and Erin Luker, that's kind of the point. "We think people love the visual fix of cakes as much — if not more — than eating them," says Gibson, who co-founded the London-based business with Luker in 2018. "We want to smoosh our faces in them, and I guess that's what other people feel like, too."

With more than 23,000 followers on Instagram, Coven Bakery is one of the internet's most widely-followed cake accounts that encompasses this old-school aesthetic. And while the pair certainly sources inspiration from what they call "very traditional 'retro' cakes," like one Trudy Campbell may toil over for Tammy in Mad Men, there's inherently more to their aesthetic — which may just be why their creations are so enchanting.

"We take inspiration from everywhere," says Gibson. "It could be a beautifully-colored textural garment or a sea slug, which sounds horrible but we lost our minds looking at pictures of them. Literally anything silly and cute is our bag."

According to commercial and editorial food stylist Maya Bookbinder, this so-called "very traditional 'retro'" look you see splayed across Coven Bakery's social media dates back to one particular point of reference: the Wilton Cake Decorating Yearbook. In 1929, a Chicago confectionery artist named Dewey McKinley Wilton began offering cake-decorating classes to pastry chefs around the Midwest. Soon, his meticulously intricate techniques earned their own name, the Wilton Method, and by the 1940s, the Wilton family had opened the Wilton School of Cake Decorating out of their home.

In the post-war 1950s, the family, now Wilton Enterprises, launched a catalog to bring its cake-decorating tools and techniques to the newly-homebound and -suburban masses for the first time. It was and continues to be a hit: More than 400,000 people still learn the Wilton Method each year, according to Wilton Enterprises.

"It's all about maximalism," says Bookbinder, whose recent work has included campy, nosh-heavy music videos like Justin Bieber's "Yummy" and Harry Styles' "Watermelon Sugar." “That over-the-top aesthetic is popular right now because we've done minimalism for so long. If you look at popular florists or makeup artists, everything is extra."

Indeed, these buttercream-soaked desserts are more fantastical than, say, the frosting-free "naked" cakes first popularized by Milk Bar's Christina Tosi back in 2014. There's nothing subtle about Brooklyn's The Gemini Bake, which decks out its cake towers with the likes of sugary marijuana leaves, darling pearls, and shaggy prismatic fringe. This too has its roots in the Wilson Method, but as food historian and author Francine Segan points out, these cakes have a richer historical significance beyond that of the 20th century — centuries beyond, into the Baroque era.

“That over-the-top aesthetic is popular right now because we've done minimalism for so long. If you look at popular florists or makeup artists, everything is extra."

"What this really is is a recreation of that pre-revolutionary French romantic period," says Segan. "Think of Marie Antoinette, of all those ruffles and lace. Think of all the fancy French pastries, all that iced piping, all those pastels. It's very much coming from that, even if [bakers] don't realize that's what it's echoing."

Segan explains that by the '50s, when the Wilton Cake Decorating Yearbook first began hitting mailboxes, people were spending more time inside their own living spaces than they had in nearly four decades. And for the first period since prior to the Roaring '20s, home entertaining was now the hallmark of the social circuit.

"They kind of had to decorate the sugar cube," laughs Segan. "It comes out of that idea of having a little more time and wanting home to be special and celebrated. I think we're seeing a revival now because people are just hanging out at home with more time on their hands."

So here we are today, in the midst of a global pandemic, environmental crisis, and unprecedented U.S. presidential election, and more than 90 years since Dewey McKinley Wilton first brought Versailles to the American pastry counter. No wonder such sumptuous food photos are, as Bookbinder says, "an ideal distraction from the dumpster fire that is 2020." There's such an overwhelming desire for nostalgic escapism that we're harkening back to multiple eras at once — from the arts and crafts-laden "cottagecore" of the 19th century to the blingy sexuality of the early 2000s.

Dee Omole, founder of London-based confectionery studio Dee's Basement, is drawn to this more expansive nostalgia as a whole. Compared to those colleagues referenced here, her bakes are fairly understated, featuring neither astrological illustrations nor piped-on F-bombs. But they're certainly evocative of another time, one in which dollops of icing could serve as its own food group.

"I'm an old soul in many aspects and wanted to bring a retro vibe to my cakes," says Omole, whose own cakes blend classical Baroque styles with more simplistic desserts found in South Korea. "There's something really universal about this aesthetic that appeals to everyone in some way."

As someone whose only real professional expertise lies in writing about clothing and the industry that surrounds them, that "something" is pure, rose-colored joy. It's no coincidence that my Instagram spelunking would lead me to cakes that have more in common with the accessories on display at 10 Corso Como than the badly-dimpled flatbreads I made in March. Take Coven Bakery, which has collaborated with brands like Suryo on campaign imagery and Girl With Pearls on a line of barrettes.

"The process of making clothes or working on a lookbook is the same for me as making a dish," says food experimentalist Lexie Park, who launched her Los Angeles-based meal delivery service Nünchi last July with a trippy jelly cake loaded with mulberries and edible flowers. Park herself has a background in fashion, having worked for companies like the since-shuttered Opening Ceremony before striking out on her own in the kitchen.

Last September, she put her industry experience to work, publishing a series titled Objects Suspended in Jelly in which she did just that: floated iconic beauty products like Maybelline's Great Lash, Lancôme's Juicy Tube, and La Mer's Crème de la Mer in muted shades of glassy gelatin. "We're all trapped in our homes and trying to decide what makes us happy," she says. "I know we're all going through a lot of important topics during this time. But when I put something out there, my sole purpose is just to bring a smile on people's faces."

I may not be able to throw a blowout anytime soon, and I'm certainly not able to adorn my baked goods with opalescent butterflies or even a single buttercream rosette, but scrolling over just one of these extravagant desserts makes me fantasize about a future in which I'm able to do both. I'll take what I can get right now.

NEXT UP
Culture
On The List (With Melissa Rich): Is The Party Venue Recession Upon Us?
Culture
TikTok’s 2022 Discover List Is Here To Freshen Up The #FYP
Culture
Emma Chamberlain Inks Exclusive Spotify Podcast Deal For ‘Anything Goes’
Culture
Allie Rowbottom’s Novel Aesthetica Isn’t About Instagram — It’s About Survival