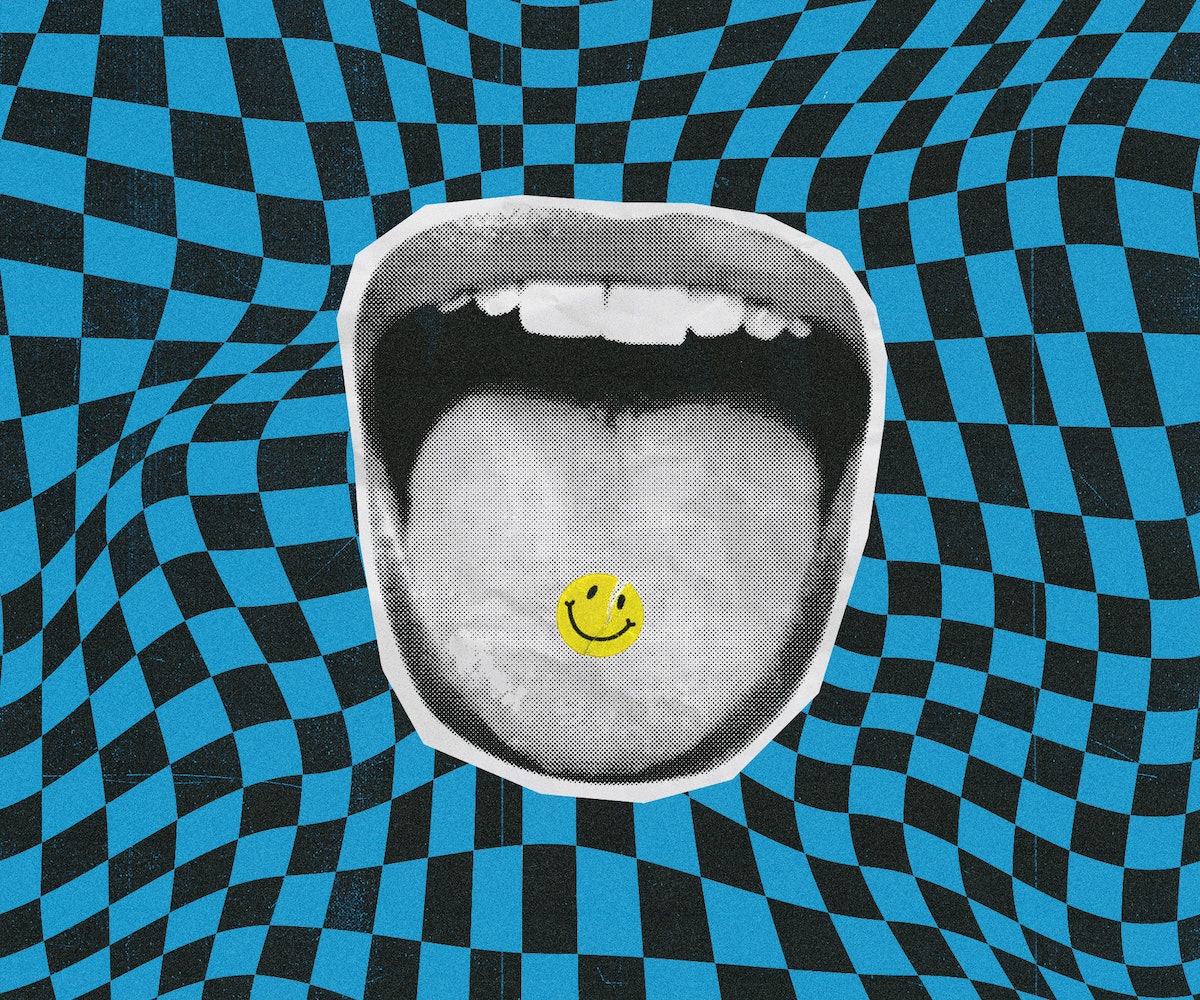 Taylure Ruggeri first crossed paths with psychedelics in 2018 when she recommended ayahuasca to her brother, who had battled addiction his entire life. “I had a hard time processing the solution of using a mind-altering drug to rewire a 3,000-ton addiction, but I began to do research,” she says. “Ayahuasca began to pop up on the doorstep of my mind almost monthly after my first major introduction to the idea. I knew I would do it one day.”

Soon, Ruggeri began looking into psychedelics as a self-treatment for her own depression. In August 2021, she had a quater-life crisis, moved to a city where she didn’t know anyone, went through a terrible breakup, and after a failed food truck business, she turned to sex work. Ruggeri began microdosing mushrooms daily. “I would get to school around 4-ish and nibble on some mushrooms and take small nibbles throughout the day. I found so much joy out of the smallest things. I really found home in my body and in solitude, and my creativity and self-expression was at an all-time high.”

Ruggeri still had a bigger desire to come to terms with trauma in her life through hallucinogens.

“‘Peru, Peru, Peru’ — it felt like voices in my head were yelling directions at me,” she says. Ruggeri booked a trip to the Amazon to find out for herself what psychedelic therapy can do. Since then, she’s completed two ceremonies accompanied by shamans. “I learned first hand by my own experience with mushrooms that I could combat many different magnitudes of depression. Post-trip, I gained my own understanding. I saw first hand my dark energy surfacing and expelling itself out of my body.”

Despite getting eaten by bugs in the Amazon and describing the trip as “actual hell,” Ruggeri felt like psychedelic treatment was just what the shaman ordered.

Lately, it seems like the tide is turning on the war on drugs as it’s now entered our mental wellness regimens. While psychedelic-therapy retreats have been around for some time in far-off escapes like Costa Rica, Jamaica, or Norway, the United States wellness industry has been increasing its interest in the possibility of treating trauma or addiction with a dose of psychoactive drugs and a shaman. In 2019 Denver, Colorado, became the first U.S. city to decriminalize psilocybin, laying the pathway for several other U.S. cities and states to allow use of the drug for therapy. The FDA has given the anesthetic ketamine a thumbs up, and licensed clinicians can prescribe it for “off-label” uses, to treat conditions differing from the drug’s intended use. Even the energizing party drug, MDMA is shifting perceptions in usage when paired with couples therapy and PTSD treatment.

These recent developments in drug decriminalization mixed with the prediction the global health and wellness market size is expected to hit $7.6 trillion by 2030 provides a ripe opportunity for psychedelics to explode into Western wellness culture. This means we might have more friends forcing us to listen to their drug trips at dinner, but it’s also an opportunity for more people to try an alternative approach to mental health therapy.

However, with the rapid growth of alternative medicine (specifically mind-altering drugs) there are unavoidable dangers like psychosis or vulnerability you need to account for when experimenting. Currently, there is a very low barrier to entry in psychedelic therapy versus traditional medicine, which requires attending medical school and acceptance into a residency program before officially becoming an attending physician. You can put yourself into bad situations if you don’t do your research and, in a worst-case scenario, end up on a bad trip led by a deranged shaman like one of the patients in Nine Perfect Strangers. OK, that’s enough bad vibes.

Ahead, find everything you need to know when looking into psychedelic therapy.

Which psychedelic drug is right for therapy?

“In 2022, there’s a mixed bag of far west — wild west, really — and pseudo clinical experiments, cautiously, almost always approved methodologies,” says Jack Allocca. Allocca has a Ph.D. in neuroscience and is a researcher in altered consciousness, having tried more than 100 drug compounds.

While there are many drugs to choose from, each has its own experience and effects on the mind. While there is no one “leader” per se, Allocca highlights three drugs that have shown promise in psychedelic therapy: ketamine, psilocybin, and MDMA.

Ketamine is FDA approved, and you’re currently able to sign up for infusions in a controlled environment. “Ketamine has been shown to kick-start depression resolution for people who never really knew what ‘OK’ really was,” says Allocca. “It’s a dissociative, so ketamine uncouples patterns of behavior that can be cue induced, meaning this behavior is a product of environmental stimuli or interpersonal stimuli or simple internal stimuli. Ketamine completely breaks that, meaning the stimuli does not cause the same response. With ketamine everything becomes new again. It’s like you’re a kid.”

Ketamine is an incredible resource, although studies haven’t seen that much of a long-term outcome.

“Psilocybin seems to be better. It doesn’t seem to do what ketamine does. It’s not an anesthetic really, but psilocybin forces you to think in a different way,” he says, comparing magic mushrooms to dreams. “With dreams, you’re allowed to have these radically psychedelic experiences that enable you to do problem-solving that’s impossible because of the constraining effect of the senses. You are able to find illogical solutions to logical problems.”

Allocca says many people have experienced less severe depression that seems to be longer lasting. Something similar seems to happen with MDMA.

“MDMA is more of a stimulant and, at times, has a psychedelic effect, especially in large concentrations. For therapy and in trials with a counselor, there’s a certain quality that helps people make peace with their inner demons from a place of nurture. MDMA basically forces a certain type of heart opening in a subject. So the person is always forced to trust again. This has been hijacked in the party context, but in the clinic, these conditions are supposed to be ideal,” he says.

Is the environment really everything?

We’ve all heard this before: When doing psychedelics, you want to be out in nature, around friends, have a babysitter, etc. But, psychedelic therapy retreats aim to provide the best possible experience while sorting yourself out.

Rythmia, a popular retreat in Costa Rica, includes massages, medical evaluations, organic meals, yoga classes, hydroclonic cleanses, and four ayahuasca ceremonies in its seven-day package. Although it provides the glitz and glam of the hallucinogenic world, most can’t afford $299 per night.

“It’s very similar to extreme sports. If you ask someone that’s cycling for the first time what’s the best environment for them to cycle, they’ll probably tell you a very clean, straight road, no traffic — something manageable. If you ask someone that has been cycling all their life, they’d probably tell you they like cycling along creeks or through traffic — they challenge themselves. Drugs are very similar,” says Allocca.

When he first started taking psychedelics, Allocca aimed to check all the boxes. Nature, no extreme conditions, having loved ones around, contained setups, etc. However, as he became more experienced, he learned how to trip in almost all circumstances. Bottom line is it’s subjective and dependent on how comfortable you feel and your experience level with a substance. There are some obvious things to avoid, he says, like a hostile environment with confrontational people or hazardous environments. It also depends on what drug you take.

“Ketamine is generally most effective when folks are relaxed, so we encourage relaxing music or bringing relaxing objects (a blanket or even a stuffed animal, etc.) with you to the infusion,” says Dr. Jonathan Adelstein, chief medical officer of Front Door Health.

If you can’t make it to a retreat or counseling session with drugs like psilocybin and MDMA, you might just have to set your intentions before partaking in psychedelic therapy.

“I’ve had different intentions with my trips, so the ideal setting can vary. In general, though, the point of the journey is to prepare yourself for whatever the psychedelic is trying to tell you — and each psychedelic has a different message,” says psychonaut Joan Barnard. “I opt for something calm and comfortable like an outdoor stroll followed by time indoors alone. Also, I've had trips in party situations. Though memorable and visually spectacular, trips in the party setting are less introspective when everything around you becomes so much more dazzling.”

How do you prepare your body?

Diet is a prevalent theme in psychedelic therapy advice but also differs from drug to drug.

There are also some shamans who won’t let you trip on your period. But for Ruggeri, her shaman sang to her period cup, blessing it, before she consumed it.

Adelstein recommends fasting several hours before a ketamine infusion as it can sometimes cause nausea.

“Before I journey, I like to simplify my diet. A week or two before, I'll give the snacks, coffee, and sugar a rest. To skip the mild nausea that can happen during the come up, I'll nix dinner the night before and journey on an empty stomach,” says Barnard.

There is no fix-all when it comes to psychedelics, and of course, psychedelic therapy is most effective with a trained therapist administering. Even though psychedelic therapy is taking off in Western culture, there are still dangers behind it as it remains unregulated, but adding psychedelics to your wellness wheelhouse offers a glimmer of hope to those who need some enlightenment they can’t get elsewhere.

“These days, it seems like people need to pick a side: Western medicine or psychedelics. To be into solely one is to discount the other, and that’s so shortsighted,” says Barnard. “I’ve had therapists, and during some especially challenging days in college, I also had a shrink. When I was swirling around a black hole of apathy and depression, I was really lucky to get some level-headed voices of reason to help me re-frame and, eventually, dig out. With psychedelics, I’ve had profound breakthroughs that changed my perspective of death, relationships, and what it means to live a full life. I believe there is a path forward where both approaches are given equal consideration.”

NEXT UP
Ask A Witch
Ask A Witch: How To Survive The Holidays With Hoodoo Magic
Culture
10 Luxurious Gifts For Your Bougiest Friend
Culture
Simona Tabasco Is the Lifeblood of The White Lotus
Culture
NYLON Party Report Card: Partying With The Stars & 94 Foot Long Whale At The Natural History Museum Gala