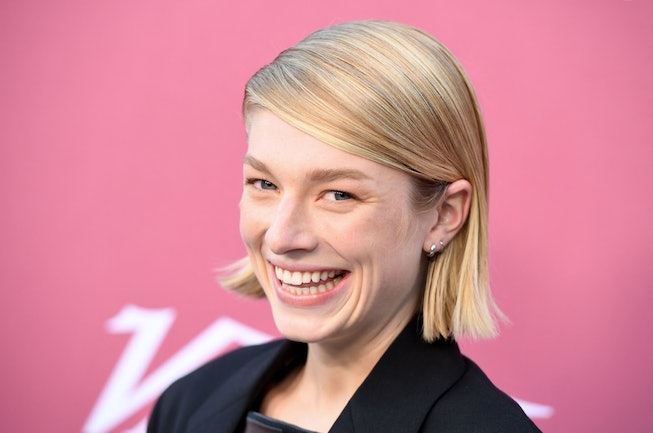 After two years, Euphoria and, more importantly, a never ending stream of Euphoria High School memes and cast interviews are back in action. The Euphoria stars are all multi-hyphenates in their own right, especially Hunter Schafer. She’s a model, actor, artist, fashion darling, and...a once-burgeoning comic book illustrator?

During her Jimmy Kimmel Live debut on January 17, Schafer discussed her former artistic practice with Kimmel, who came prepared with a notebook of Schafer’s art, including everything from sketches of cigarette-wielding industry veterans she used to draw while waiting in runway model castings to spooky ragdoll Tim Burton-esque comics she drew in fifth grade. When Kimmel told her she could be an artist professionally, she said, “Yeah, that was the goal previously — and then Euphoria happened.”

“Comic book illustrator was my dream job,” she told him, revealing the superhero she came up with as a kid: “Art Boy,” who had a giant pencil that he could use to draw whatever he needed into existence in order to complete his mission.

Though Art Boy never came to fruition (although if you’re on Hinge in New York City, I’d argue there’s no shortage of art boys who believe they can draw whatever they want into existence!) but Schafer did get to visit the set of what is arguably the best superhero character: Spider-Man.

“I love Spider-Man. I grew up on comic books. That used to be my dream job was comic book illustrator,” she said, adding that she got to visit Zendaya, or “Z,” at her place in Atlanta while they were filming and see the set and the bunker that MJ stays in. “It was insane,” she said. “As much CGI as is used to make all that stuff there was a lot of real stuff.”

But despite all the secrecy surrounding the production — the extent which was revealed today with how Andrew Garfield lied to ex and former costar Emma Stone about how he was returning to the franchise — Schafer never had to sign anything saying she wouldn’t share what she’d seen on set. “Not that I remember. Now that you bring it up that is kind of strange,” she told Kimmel. Guess that’s the perk of being best friends with a star!

NEXT UP
Culture
Succession Season 4 Trailer Explodes With Family Drama
Culture
Phoebe Dynevor Will Not Return for Bridgerton Season 3
Culture
The 2023 Oscar Nominations Full List Is Here
Culture
Netflix Is Seriously Cracking Down On Sharing Passwords
Style + Culture, delivered straight to your inbox.