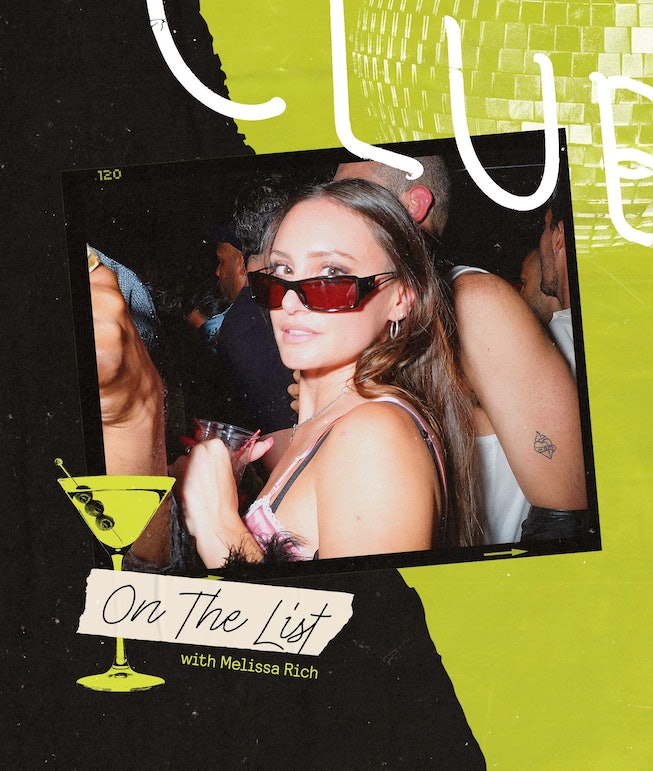 Welcome to On The List (With Melissa Rich), NYLON’S column with comedian Melissa Rich, here to illuminate the state of nightlife, one party at a time.

When it comes to current nightlife, no one I know even goes to actual bars on weekends. Not before 2 a.m., anyway. That’s for amateurs willing to wait 40 minutes for a vodka soda. If you’re one of them, I’m sorry — stand on your toes and try to make eye contact with the bartender. Events with lists, raves at undisclosed locations, illegal rooftop soirees, and loft parties in Tribeca will always be preferable; lately these seem like the only way to avoid the homogenous crowd willing to wait in excruciating lines, dressed identically in the Y2K-inspired crop-tops-and-giant-trousers ensemble trending on fashion TikTok. In the best-case scenario, they’re there to dance with their friends, make drunken friendships with strangers in the bathroom, and get home after the sun’s up. In the worst case, they’re there solely to have something to post.

“Everyone’s a microcelebrity now,” says artist and native New Yorker Eva Evans. “You meet girls under 25 and at least one of their accounts has 40K followers.” Incidentally, Evans has over 200,000 followers on TikTok, and one of her most viewed videos is a list of the best spots in NYC to go out dancing. “It leads to people trying to photograph themselves in the bathroom at Lucien like it’s the Fred Segal wall in LA.” Her example brings to mind the @nolitadirtbag meme of what appears to be a table of middle schoolers sitting at the East Village French restaurant, a longtime haunt for Manhattan’s intersecting art and fashion scenes. How would these literal tweens even know about Lucien if not for social media? This is what makes modern adolescent New Yorkers so terrifying. They know too much.

Scenes and neighborhoods are always in flux. Mine, in particular, experienced such a barrage of new young people that it felt like the block, itself, got Botox. I refuse to add to the cringe Dimes Square think piece genre, and unless you want to move to the Upper West Side, you simply must embrace the kids as they come. That being said, my local bar Clandestino got a doorman — do with that information what you will. The Flower Shop, which had more of a neighborhood feel, has now taken on a crowd similar to Ray’s, the fake dive bar owned by Justin Theroux, where the vibe has always been guys who make living in New York and getting weekly tattoos their entire personality and girls hoping to flirt with Nicholas Braun, a partner in Ray’s who plays the earnest Cousin Greg on Succession; a groan-worthy example can be found in the “East Villains,” a group of TikTok creators embodying this culture and essentially demonstrating that you can be in a fraternity forever if you put your mind to it.

In talking with Evans, who grew up in the East Village, the conversation turned to how much nightlife behavior has changed post-lockdown. “There’s this general culture of performance and this peacocking of money, and the people who created the culture now can't enjoy it.” This “performance” of going somewhere to monetize it for likes and followers feels very un-New York — at least very un-downtown — and unfortunately, very American. Is nightlife TikTok just capitalism? Is it profiting off of a non-unique experience for the payoff of going viral? Was the end of gatekeeping a mistake? Couldn’t you just do a bump in the bathroom?

Earlier this summer, my Instagram followers saw a story of me on the waterbed at Joyface, the impeccably decorated East Village disco spot, just like everyone else who was there that night, and every night, proving I am absolutely not above anything. The crowd was swept up in a content frenzy; hot people with their phones in the air and a dance floor filled with those who had already gotten the shot. Jordan Helms runs one of TikTok's most informative NYC nightlife recommendation accounts, and a recent TikTok cites Joyface as a celebrity hot spot. “Kaia Gerber was even here recently,” she says, before warning her audience about the line to get inside. The intention behind Helms’ videos reads sincere; she wants people in the city to find places to have a good time. Yet, when meeting her followers out IRL, they usually request that she hold back. “I get a lot of ‘I love your videos, but could you never mention this bar…’”

When a spot blows up on TikTok, there are casualties. Recommendation videos remove the organic nature of discovering a bar on the street or by word of mouth. It also invites a feeling of disposableness; Helms speaks of clubs that “still have momentum” and which ones are “over,” likely because of exposure on TikTok. We should return to a virtuous form of gatekeeping: a certain level of altruism when disseminating go-to’s, resisting the urge to increase your own online status at the expense of overexposing something special. When I ask Helms if she would stop making TikToks if they proved to be sending the wrong crowd or destroying the vibe, her answer came after a very, very long pause: “I don’t… think… I kind of… that’s a good question. I really try to be meticulous.”

Two clubs constantly listed in TikToks tagging NYC nightlife are Paul’s Baby Grand and Paul’s Casablanca. Owned by the legendary Paul Sevigny, they’re legacy clubs, with long-standing reputations for being the spots everyone wants to get into — and spots with notoriously tight doors. “It’s pretty easy to tell who found us on TikTok,” says Sasha Mutchnik, who works the door at Casa. “They’re usually confused by the sign.” To be fair, the sign reads “McGovern’s Bar,” but that’s not the only tell the crowd gives off: there’s the homogenous style, the large groups committing hard to a very current trend. When you see it, you know it.

Last February, I was standing outside of Paul’s Baby Grand. It was the era when (Kan)Ye had just gifted Julia Fox and all of her friends Birkin bags during a dinner at the aforementioned Lucien. Outside of the club stood at least 10 brunettes, all in low-rise black latex. Looking around, there was more black leather, more black bandeaus. I walked past some more women larping as Fox to find my friends talking with Euphoria actor Angus Cloud. I looked around and suddenly realized that most of the guys outside of Paul’s were dressed exactly like him in expensive fashion-boy designer vintage and a snapback. At that point it felt like a glitch in the simulation; TikTok has leapt out of our phones, creating a feedback loop of gaining inspiration from social media, presenting, then posting about it, until the end of time.

Mutchnik, who also runs the Instagram @starterpacksofnyc, caricatures the styles, interests, purchases, and haunts of hyper-specific modern archetypes living in the city. The account is incredibly accurate, hilarious, and speaks to her unique ability to run the door at an exclusive club. She’s gifted at assessing people in line and maintaining the mix inside, no matter who’s outside trying to get in. “There’s a sacred balance of different crowds that are co-mingling, there’s not one type of girl or guy here,” Mutchnik explains. “One of the things that makes Casa special is the great deal of variety.” It’s this curation that keeps these clubs, and nightlife in general, exciting, which the uniformity of other, less discerning clubs and nightlife TikTok threaten. Luckily, you can lead a girl on horse tranquilizers to the club, but she and her nine friends have to get past the door to drink.

NEXT UP
Culture
Caroline Polachek In KNWLS & More Party Photos You Missed
Beauty
Bella Hadid’s Clip-less Updo Is Going Viral On TikTok
Beauty
This Viral Black Honey Lipstick Dupe Is Only $5
Culture
Who Won At The 2023 Grammys
Style + Culture, delivered straight to your inbox.