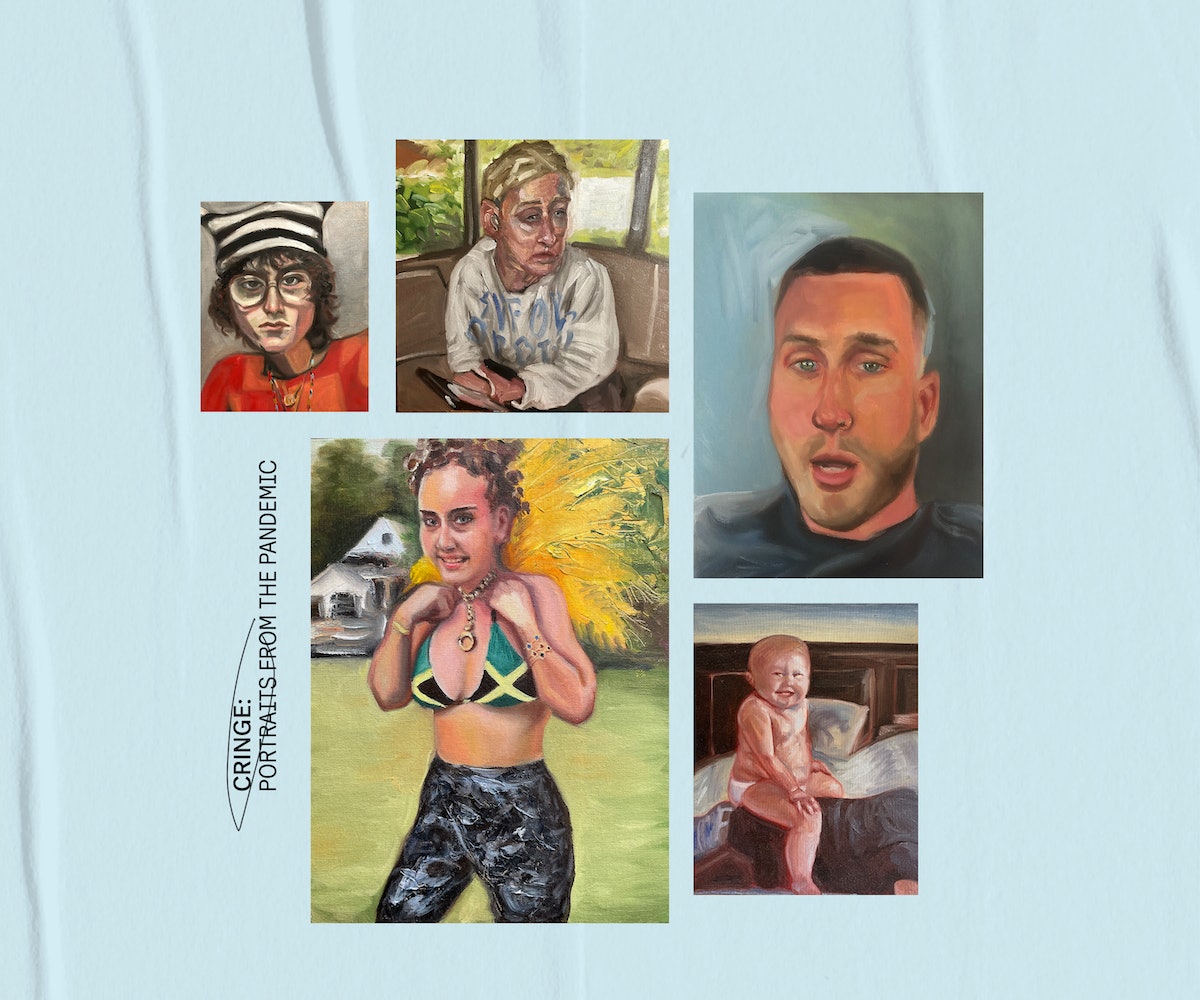 Celebrity culture took on a sinister sheen during pandemic lockdown, with much of the world fighting to simply survive and celebrities not being able to hide the severity of their out-of-touchness. With everyone glued to the same mind-numbing media of the moment, the grotesque spectacle of celebrity was put on display in a way like never before — it’s a moment the artist Isaac Peifer’s new exhibition Cringe: Portraits from the Pandemic tries to capture.

Peifer started painting as a hobby in late 2019. When the pandemic hit, he spent lockdown painting celebrity culture’s most cursed moments — often as they were happening, and posting them to his Twitter account. The result is a collection of absurd, unsettling, and very fun portraits that capture the disgraced moments of celebrity culture in late 2019 and 2020, from first son Hunter Biden’s leaked bender photos to Adele’s Carnival fit featuring a Jamaican flag bikini top and Bantu knots.

NYLON talked to Peifer ahead of the exhibit about celebrity villains and anti-heroes, about how how portraiture can revere or revile its subjects, and about everyone’s favorite grifter, Anna Delvey.

You only started painting in 2019. How did you get started and why?

It started with a sort of epiphany, actually. I had a psychedelic experience, which is maybe cliché at this point, but I did decide that I wanted to engage more with the world and that art could be my way to do that. I went to the art supplies store and bought some pencils. At this point, I didn’t even think about painting. This was in September [2019] and October 1 was when I painted my first painting with oil, just because I realized I had always been curious about that. It was a lot of struggling to try to learn how to do that on my own and so my process is pretty much what I’ve managed to figure out for myself. There’s something about painting specifically that requires both all of your concentration and focus and shutting off your brain, so it was just really sort of a therapeutic process. When quarantine happened and I had nothing else to do, it became my lifeline. I could spend all day painting the things I saw on social media.

How did you pick these celebrity moments in particular?

Usually once a day there would be something that happened, some celebrity that would go viral, and I noticed usually in those moments a moment of humiliation. A celebrity would try to humble themselves in a way that would always come across clownish to me. I would be scrolling through Twitter, saving photos I saw and whatever ones I thought might make an interesting composition in a painting. I’d try to sit down and bang it out as soon as possible before the moment passed. Because these moments were all so ephemeral, it became a personal challenge to me to take a moment, sit down, bang it out and laugh at the result, and then I would just share it with other people.

Do you think there was something about being in quarantine that made these cringe moments ones everyone knew about at the same time?

Yeah, because most people were probably just sitting in front of their computers or phones even more than they already had been — which is saying something. It became this sort of strange process where in our solitude and loneliness, we’d look to these technologies to find some sense of solidarity or community, and one of the ways we did manage to find this was to participate in this carnival of ridicule that would happen. A lot of my paintings that involve celebrities, I don’t feel that I’m totally just ridiculing them; I’m just reveling in the ridiculousness of everything. I think one way for people to cope with the catastrophe was to turn it into something that was ridiculous.

Celebrities have sort of inadvertently contributed to that sort of process whereby they tried to lend their celebrity in the traditional way, and what ended up happening was they unintentionally became clowns or jesters for everybody. We were all reveling in how ridiculous everything was. This aspirational thing, where we liked that celebrities didn’t live like us — the glamour and luxury of celebrity was very aspirational, whereas during lockdown it sort of lost that luster. We saw that despite the effort of these types of people to show that we were all in the same boat, or in it together, there was this sense that we weren’t in this together.

“A lot of my paintings that involve celebrities, I don’t feel that I’m totally just ridiculing them; I’m just reveling in the ridiculousness of everything.”

What era of celeb culture did you grow up in? How did that play into these works?

I’ve always considered myself to be pretty dumb about celebrity culture. I’ve never really ever participated in what you’d call “stan culture” and never personally had a lot of celebrity idolization, which isn’t to say I had any disdain. I feel like one of the reasons why I’ve enjoyed painting the subjects I’ve been painting is because I do sort of feel removed from celebrity culture. It’s always been a little bit ridiculous to me and I’ve been enjoying this moment where the ridiculousness is so over the top and sort of more difficult to ignore.

I grew up at a time when I remember Paris Hilton — I love Paris Hilton. She’s a celeb I absolutely love, but I didn’t start loving her until way later after her moment of intense celebrity passed. That era of celebrity felt like a transition of what I saw as high glamour celebrity to transitional space between high glamour celebrity and what we have now, which is 15 minutes of fame. Anybody can be famous if you play your cards right. People don’t want to be movie stars or rock gods so much as they want to be seen and idolized and adored, but also kind of hated. I think people do kind of want to be villainized. I think people really flirt with that in a way that I think makes this current era of celebrity a little different. Part of the ridiculousness of Chrissy Tiegen is her intense desire to be liked and seen as good when she’s so clearly just any other out of touch, pampered celebrity. People are rejecting this idea of celebrities being good pure role models and now that celebrities have become villains in the culture, villainy is part of what people aspire towards in a sort of irreverent way.

I was really interested in that concept: celebrity villains and the concept of the grifter. People kept talking about how were in an “age of the grift,” how everyone was grifting and Anna Delvey to me is a sort of a folk hero where she participated in this grift, but she was sort of seen in a lot of ways as one of us: Normal people who managed to take advantage of the people we understand make their lifestyles off everyone else. There’s this interesting spectrum that exists between anti-hero characters and pure villains.

“People are rejecting this idea of celebrities being good pure role models and now that celebrities have become villains in the culture, villainy is part of what people aspire towards in a sort of irreverent way.”

[My Jeffrey Epstein] painting immediately went viral and I think that set off my trajectory into choosing these types of subjects for my portraiture. I was interested in portraiture, but I didn’t really know who to paint. Luckily, there’s always this carousel of villainy that was always in the news. There’s something about a villain’s face that can be so iconic and I like the idea of using portraiture not to honor them, but to criticize who we are as a culture.

When my Epstein painting went viral, so many people were so angry about it. I got a lot of hate for it because people couldn’t seem to understand that a portrait could be used for anything other than honoring somebody. I found the level of pushback to be interesting and I felt good because I think any artist, especially a brand new artist, likes when people react strongly to their work. My roommates’ friends would come in and Epstein was hanging on the wall and people would laugh or be really upset by it, and I’d shrug and say I’m clearly not endorsing Epstein, I’m just critiquing the culture through a medium that is associated with honor and has been used to honor people who in some way have some level of Jeffrey Epstein-ness to them.

Right, because obviously we're okay with a portrait of someone like Thomas Jefferson.

I read that you paint portraits in one sitting. Can you tell me a little bit more about that?

All of the smaller portraits are all done in one sitting, which was an easy thing to do during quarantine, but it was out of necessity to try to capture a moment while it was still hot. There’s always a moment when you can finally catch a glimpse of what the finished painting might look like, because it always starts as a question mark and every time it’s this point of joy and laughter for me. What ends up happening through this process of painting fast and not planning is you end up getting these distortions that convey the ridiculousness and the grotesqueness of some of these characters.