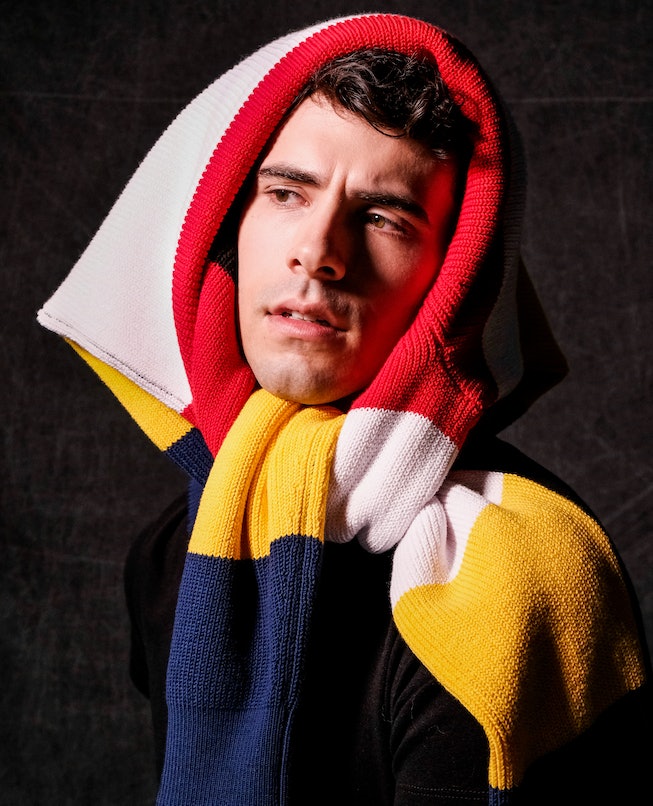 Joe Castle Baker thinks he bombed his first set in over a year. It was an all-queer lineup during Pride weekend. The 30-year-old Brooklyn comedian spent his five minutes entirely in character as a crazed Pride-goer, desperate to appear he’s having a good time. He pranced out screaming, showering the crowd with a rapid-fire stream of exclamations, affirmations, and compliments. At one point, he recited a poem about friendship. Later, he asked an audience member to stare into his eyes and tell him she loved him.

It’s true he didn’t kill. People laughed but seemed unsure at times whether or not his theatrical enthusiasm was in earnest. The following sets were mostly punchline-style jokes about social anxiety, dating apps, and banks at Pride.

“Unless I see every single person in the audience laughing, I’m not happy,” Baker tells me, a few days later, sitting outside a café over sweating ice coffees during one of Brooklyn’s recent heat waves. He’s in an off-duty comedian summer uniform: camouflage Crocs, tall socks, shorts, and a T-shirt. “That can be tough,” he continues, “when you’re intentionally trying to do comedy that doesn’t… that is formally different.”

Baker is well over 6 feet tall, with mischievous, highly expressive features that are hard to read, or perhaps just hard to trust after watching him transform into so many different people on my Instagram feed. He’s among the set of formerly small-time comics who, after live performance shut down, spent the pandemic creating comedy sketches and character videos.

These videos circulated enough on TikTok and Instagram that Baker now gets recognized around Brooklyn. “It was like some weird spell was cast on me as soon as I came out of my apartment after the pandemic,” he says. He’s been performing in New York for six years pre-pandemic, but he won’t go back to his day job at a Williamsburg bistro post-vax. In addition to sponsored content offers and a spot on HBO’s The Other Two, Charles Rogers and Sarah-Violet Bliss tapped him to be a series regular in the new, final season of cult favorite Search Party, which has has become a clearing house for buzzy alt-comics.

In short, Baker parodies the worst people you’ve ever met or followed. There’s his impression of a conversation about a murder held entirely of phrases like “Couldn’t be me” and “We love to see it.” Or, his parodies of a smug GameStop explainer or an influencer commenting on a “random, hideous girl’s picture to appear nice.” One of his specialties is, as he puts is, “making fun of types of gay people,” like with his recurring alter ego, “LGBTQ content creator, curator, and journalist” Jeremy Trash, an indictment of influencers who milk their identities for money. Many internet comics mock these types of internet main characters. But there’s a gossipy, caustic precision and a beserk physicality to Baker’s sketches that sets them apart.

“Mania is a word I get a lot,” he says. “And chaotic. Which I do not like. I get so many comments like, ‘This is the chaotic energy I live for.’ It just makes me wince.” He pauses, walking it back. “I mean, I’m happy people like them... I don’t mean to be a bully.” Chaotic comedy might be a cliché, but what people mean is that Baker’s videos can be stressful because they often point out idiotic, dishonest, and at worst, truly depraved behavior.

“It just comes from being like, ‘Why is nobody seeing how fraudulent this stuff is?’” he explains. “And wondering why is nobody turned off by it. Like with Jeremy Trash, he’s based on someone who capitalizes on their identity, only to fortify their career and create fame for themselves. Which feels, I don’t know… evil.”

Baker’s comedy might come off as misanthropic if it weren’t so funny. There’s relief, as well as anxiety, that comes with being given the opportunity to laugh at the ugly parts of culture and the bad actors within it. His more cynical sketches are balanced out with absurd characters like a European playboy named Gordon, and a sommelier who hallucinates every time he sniffs a glass.

Baker takes a special interest in people who commit fraud out of fear. His first time going viral was an impression of a closeted boy talking to a therapist about the type of girls he likes. He spirals into a monologue about “big brown hair.” “I think the thing that I gravitate towards a lot is overcompensating,” Baker continues. “A lot of my bits or characters feel like they are desperately trying to hold on to some thread of safety or security or identity. The joke is that they’re always actually careening towards misery or destruction.”

Baker has what initially sounds like a classic comedy origin story. He was born in Los Angeles to two working actors, Ray Baker and Patricia Richardson, who starred opposite Tim Allen on the hit ’90s sitcom Home Improvement. As such, he spent the first eight years of his life on the set of a sitcom. “If you’d looked at me back then, it was like, ‘This kid’s going to be a comedian!’ I was goofy,” he says. “The second I realized I was gay, it was like, ‘Time to shut everything down.’ I became very insular and withdrawn.” His parents sent him to therapy, then to theater camp, where he eventually came out. “It was like, ‘Wow, this is so fun, I’m finally getting along with everybody,’” he say, rolling his eyes. “You know, like so many gay boys, it’s the same story.”

Comedy wasn’t on Baker’s radar until after college. He wanted to be a film actor, so he went to State University of New York at Purchase for drama, but then transferred to New York University to study psychoanalysis after freshman year. “I was about to apply to clinical psych Ph.D. programs at the end of undergrad when I just realized that I really didn’t want to do this,” he says. Simultaneous to this realization, Baker was discovering the thriving New York City alt-comedy scene. He was surrounded by comedians thanks to his roommate, Tessa Skara, who was in a sketch group with Matt Rogers, Bowen Yang, Sudi Green, and Dave Mizzoni, among others. Baker says he decided he wanted to do comedy while watching Kate Berlant and John Early, widely considered pioneers of today’s arty, surrealist-cerebral style of stand-up and improv.

“When I saw Kate and John,” he remembers, “I was just in awe of their mastery over a distinct performance style. This style was theirs, that had their nametag on it. Since then, it’s been my goal to create a persona that’s mine, that people can point to and be like, ‘That’s Joe’s way of performing; that’s Joe’s comedy.’” He calls his first couple years of stand-up blatant Berlant cosplay, but he was proud recently when he heard Search Party’s Rogers describing his “manic” style in similar terms to those he uses to describe Berlant and Early.

In general, I get the sense that Baker cares less about what people think about him (outside a small circle), or using comedy for cultural critique, than about satisfying his desire to take risks as a performer. Despite the self-writing punchline of Baker’s therapist-to-comedian trajectory, he doesn’t joke about mental health or other relatable topics. “I think relatability is such a pointless target to hit,” he says. “Comedy Central types are so obsessed with being relatable. I don’t get the MTV thing of, ‘We just want to tap into your mind and show you what you already like.’ I’m not trying to alienate people; I just don’t think it’s something to aspire to.”

When I ask what he’s working on that he’s excited about, he mentions a podcast he co-hosts with fellow comic Max Wittert called XXX Trauma Crime Investigations. Baker describes it as “intentionally unlistenable” and “an experiment in trying to be alienating,” comparing it to video artist Ryan Trecartin’s discombobulating installations. It’s podcast-as-performance art. He and Wittert use digitally altered voices for their alter egos, Jennifer and Catalina, who investigate “crimes” like Quiznos, the gay tabloid OMGBlog, and comments on their Instagrams. His other current pet project is a Twitch livestream, also co-hosted with Wittert, called Using Others, in which they explicitly “try to get people to develop a parasocial relationship with them.” He doesn’t mind that only a few dozen people tune in to either of these. “It’s nice to do comedic projects that we don’t envision any kind of commercial success with,” Baker says. “It’s very freeing.”

A decade ago, Baker might have felt torn between turning his viral success into a comedy career and pursuing his multimedia performance art. It’s true he doesn’t see himself taping a Netflix special or joining SNL, but the phenomenon of internet comedy, expedited by the pandemic, means people consume and interact with comedy far more regularly. There are new ways to make money and more people watching.